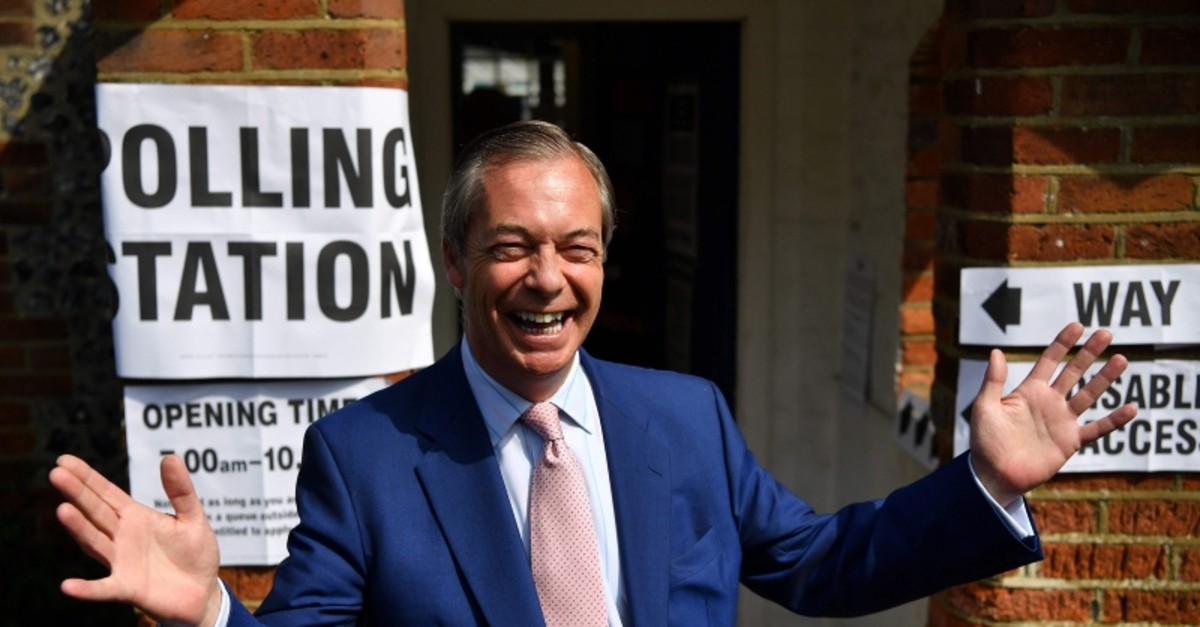 Brexit Party leader Nigel Farage gestures as he arrives at a polling station to vote in the European Parliament elections, in Biggin Hill, south east England on May 23, 2019. (AFP Photo)
by May 23, 2019 11:27 pm

Veteran eurosceptic Nigel Farage's new Brexit Party is expected to dominate in Britain, while a new right-wing group is also set to challenge established parties in the Netherlands, as the two countries kicked off elections to the European Parliament on Thursday.

From Thursday until Sunday, more than 400 million voters across the European Union's 28 member states are being called upon to participate in the elections, one of the world's biggest democratic exercises.

Official results are not due to be released until after the close of polls on Sunday, but an initial projection from the Netherlands showed Frans Timmermans' Socialists coming out on top in the country.

The Socialists received 18.4 per cent of the vote, corresponding to 5 seats in the European Parliament, according to an Ipsos projection reported by Dutch state broadcaster NOS after polls closed.

Thierry Baudet's right-wing populist Forum for Democracy (FvD) - which has called for a referendum on EU membership for the Netherlands - is predicted to get three seats.

Opinion polls from before the election suggest the Brexit Party will win 30-40 per cent of votes in Britain and eclipse the combined vote share of the country's two main political parties, the Conservatives and Labour.

British analysts and politicians expect strong polarization over Brexit in the elections.

Angry former supporters of British Prime Minister Theresa May's Conservatives are expected to flock behind the Brexit Party, after a political impasse over leaving the EU forced Britain to join this week's European elections.

"We have come so far in just a few short weeks," Farage tweeted to supporters of the Brexit Party, which was launched last month.

He urged voters to help him "change politics for good" and join a "fight for democracy" to ensure that the government acts on the result of the Brexit referendum in 2016, when 52 per cent voted to leave the EU.

A surge in support is also expected for the Liberal Democrats, who are staunchly opposed to Brexit and have campaigned for a second referendum with an option for Britain to remain in the EU.

"Britain faces a simple and inescapable choice - stability and stop Brexit with the Liberal Democrats, or Brexit chaos with Labour, the Conservatives and the Brexit Party," Liberal Democrat leader Vince Cable tweeted.

Labour leader Jeremy Corbyn said a vote for his party "will challenge the far-right in Britain and across Europe."

"We are the only party working for a sensible solution to break the Brexit deadlock and protect jobs, rights and living standards," Corbyn wrote on Facebook.

Twenty-six seats are up for grabs in the Netherlands, with 73 seats in 12 constituencies in Britain.

Turnout was just 36 per cent in the last European elections in Britain in 2014 and is expected to be around the same level this time.

Initial turnout estimates from the Netherlands were on a par with the last EU elections.

Many fear that the EU legislature, which has been dominated for most of its 40-year history by a grand coalition of the centre-left and centre-right, could be paralysed by the populist surge that has also made waves in Italy, France, Hungary and Germany.

The new parliament will be instrumental in appointing the next members of the EU's executive, the European Commission, before taking up its regular work of vetting new initiatives and the bloc's future budget.