Theresa May says will resign as prime minister, Conservative leader on June 7 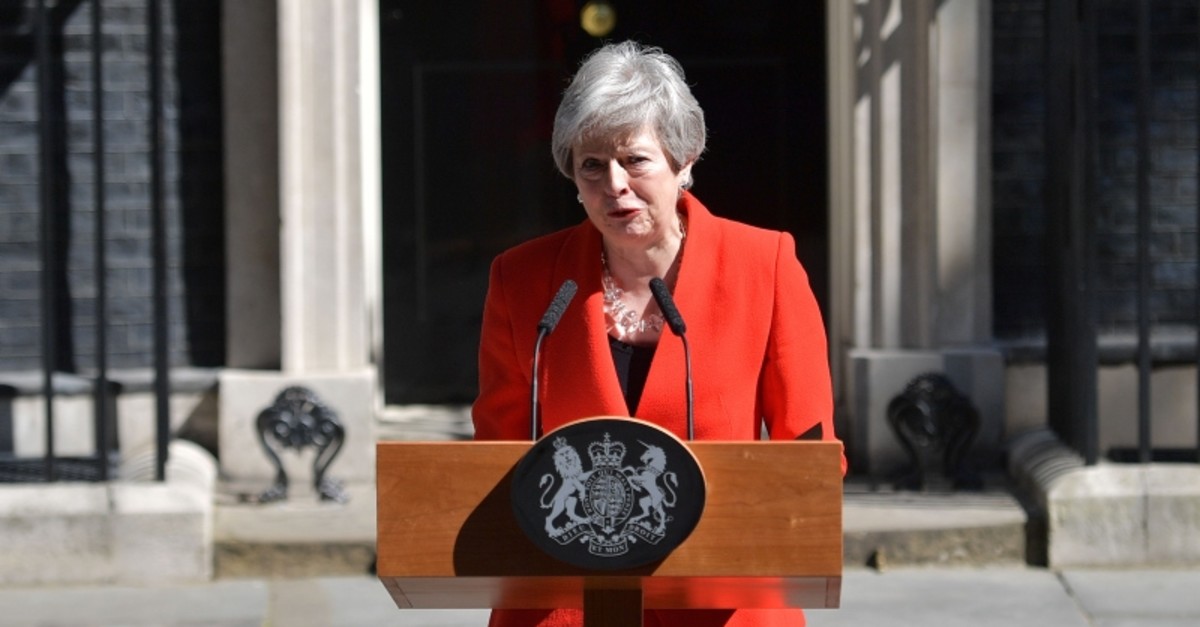 British Prime Minister Theresa May on Friday said she would quit, triggering a contest that will bring a new leader to power who is likely to push for a more decisive Brexit divorce deal.

Acknowledging that the support of her Conservative lawmakers had disappeared after her failure to deliver on Britain's 2016 vote to leave the European Union, May set out a timetable for her departure: She will resign as Conservative Party leader on June 7 with a leadership contest in the following week.

"I will resign as leader of the Conservative and Unionist party on Friday, 7 June so that a successor can be chosen," May said outside 10 Downing Street.

May was barely able to finish her seven minute resignation speech, her voice breaking as she fought back tears when describing her "enduring gratitude to have had the opportunity to serve the country I love."

Trying to shape a legacy which will more likely be defined by her failed negotiation with the EU, she listed some of the things she said she had achieved during her time in power, including tackling race relations and the gender pay gap.

But it was at the end of her speech, when the usually composed prime minister, dubbed the "Maybot" by some for her robotic performances, almost broke down.

"I will shortly leave the job that has been the honor of my life to hold," she told reporters outside her Downing Street official residence.

"The second female prime minister, but certainly not the last. I do so with no ill will but with enormous and enduring gratitude to have had the opportunity to serve the country I love."

May, once a reluctant supporter of EU membership, who won the top job in the turmoil that followed the 2016 Brexit vote, steps down with her central pledges - to lead the United Kingdom out of the bloc and heal its divisions - unfulfilled.

She endured crises and humiliation in her effort to find a compromise Brexit deal that parliament could ratify, and bequeaths a deeply divided country and a political elite that is deadlocked over how, when or whether to leave the EU.

May's departure will deepen the Brexit crisis as a new leader is likely to want a more decisive split, raising the chances of a confrontation with the European Union and a snap parliamentary election.

The leading contenders to succeed May all want a tougher divorce deal, although the EU has said it will not renegotiate the Withdrawal Treaty it sealed in November.

Opposition Labour leader Jeremy Corbyn said Friday that May was right to resign and whoever replaced her as leader of the Conservative Party must call an election.

"She has now accepted what the country has known for months: she cannot govern, and nor can her divided and disintegrating party," Corbyn said in a statement.

"The Conservative Party has utterly failed the country over Brexit and is unable to improve people's lives or deal with their most pressing needs. Parliament is deadlocked and the Conservatives offer no solutions to the other major challenges facing our country.

"Whoever becomes the new Conservative leader must let the people decide our country's future, through an immediate General Election."

Scotland First Minister Nicola Sturgeon, a frequent critic of May, says she is worried May's decision will bring "an even more hardline" Brexit-backer to power.

Nigel Farage, one of the faces of Britain's Brexit campaign, said May had misjudged the mood of the country.

"It is difficult not to feel for Mrs May, but politically she misjudged the mood of the country and her party," he said Friday in a statement.

"Two Tory leaders have now gone whose instincts were pro-EU. Either the party learns that lesson or it dies."

The European Union's position on the terms of Britain's exit from the bloc has not changed despite May's announcement, Commission Spokeswoman Mina Andreeva said.

"The President very much liked and appreciated working with Prime Minister May. He will equally respect and establish working relations with any new prime minister, whomever it may be. Our position on the withdrawal agreement -- there is no change to that," Andreeva said.

She reiterated the bloc would not change the stalled Brexit withdrawal deal but could tweak the accompanying political declaration on EU-UK ties after Brexit.

The pound was up 0.4% against the euro on Friday after 14 days of losses but trading was volatile as concerns rose that May is likely to be succeeded by a Eurosceptic leader, potentially increasing the chances of a 'no-deal' Brexit.

While there is no clarity on who her successor will be, markets are concerned that a tougher stance with the European Union might prompt investors to turn more negative on the outlook for the pound in the coming months.

Those concerns have pulled the rug from under the pound over the last two weeks, prompting traders to sell the currency against the euro and the dollar aggressively and dialling up expectations of Britain crashing out of the EU without a deal.

Versus the euro, the pound was a third of a percent stronger at 88.05 pence after 14 consecutive days of losses as traders trimmed back some of their negative bets on the pound before a long weekend. Britain's markets are shut on Monday for a holiday.

The leading contenders to succeed May all want a tougher divorce deal, although the EU has said it will not renegotiate the Withdrawal Treaty it sealed in November.

Boris Johnson, the face of the official Brexit campaign in 2016, is the favorite to succeed May, and he thanked her for her "stoical service." Betting markets put a 40% implied probability on Johnson winning the top job. Others tipped are Dominic Raab, a Brexit supporter and former Brexit secretary, with a 14% implied probability on his chances. Environment Secretary Michael Gove, former House of Commons leader Andrea Leadsom and Foreign Secretary Jeremy Hunt each have a 7% probability, according to betting markets. Defense Secretary Penny Mordaunt and International Development Secretary Rory Stewart each have a 4% chance of the top job, while Home Secretary Sajid Javid has a 3% chance.