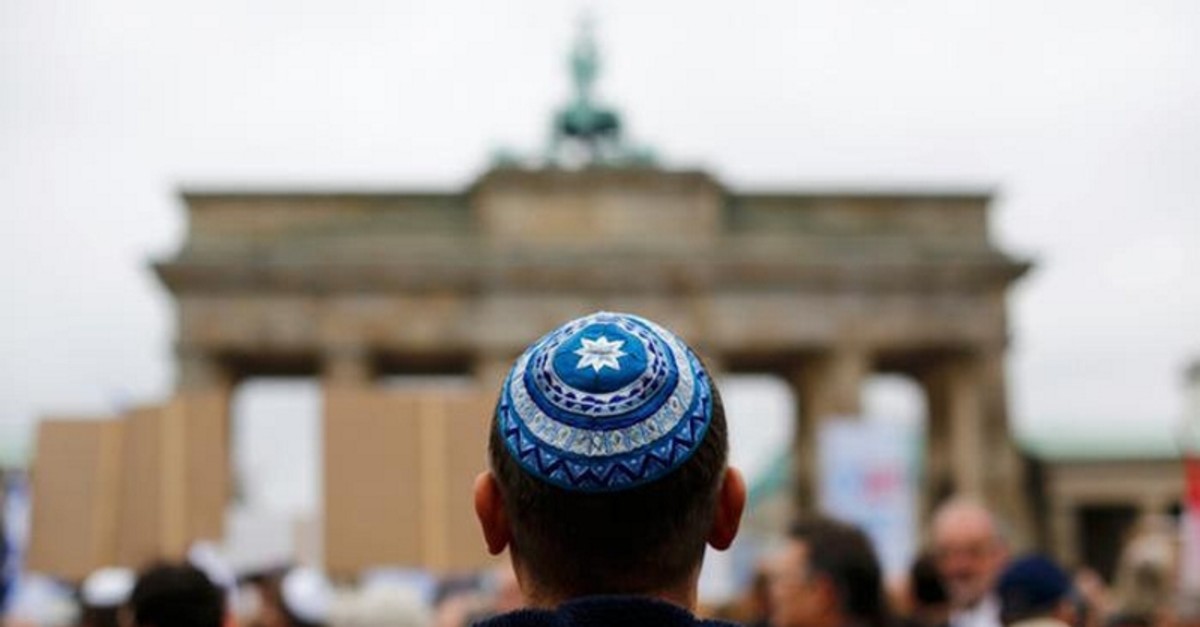 This file photo shows a man wearing a Jewish skullcap in front of Berlin's landmark Brandenburg Gate. (Reuters Photo)
by Compiled from Wire Services May 25, 2019 2:04 pm

Felix Klein was quoted in an interview with the Funke newspaper group published Saturday as saying that "my opinion has unfortunately changed compared with what it used to be" on the matter. He said: "I cannot recommend to Jews that they wear the skullcap at all times everywhere in Germany." He didn't elaborate on what places and times might be risky.

Klein, whose post was created last year, cited "the lifting of inhibitions and the uncouthness which is on the rise in society" as factors behind a rising incidence of anti-Semitism.

"The internet and social media have largely contributed to this -- but so have constant attacks against our culture of remembrance."

And he suggested police, teachers and lawyers should be better trained to recognize what constitutes "clearly defined" unacceptable behavior and "what is authorized and what is not."

"Anti-Semitism has always been here. But I think that recently, it has again become louder, more aggressive and flagrant," Claudia Vanoni told AFP in an interview, adding the problem was "deeply rooted" in German society.

Vanoni said the proliferation of online platforms that allow people to express extremist views without inhibition while hiding behind screens had fostered the rise in cases.

Government statistics released earlier this month showed that the number of anti-Semitic and anti-foreigner incidents rose in Germany last year, despite an overall drop in politically motivated crimes.

Anti-Semitic crimes rose 20 percent in Germany last year, according to interior ministry data which blamed nine out of ten cases on the extreme right.

The arrival in parliament of the far-right AfD, whose leaders openly question Germany's culture of atonement for World War II atrocities, has also contributed to the change in atmosphere, as has the arrival of more than a million asylum seekers, many from Muslim countries such as Syria, Afghanistan or Iraq.

Klein said that while the far-right was to blame for the vast majority of anti-Semitic crime, it was apparent that a much smaller number of Muslims were also influenced by watching certain Arabic television channels "which transmit a dreadful image of Israel and Jews."