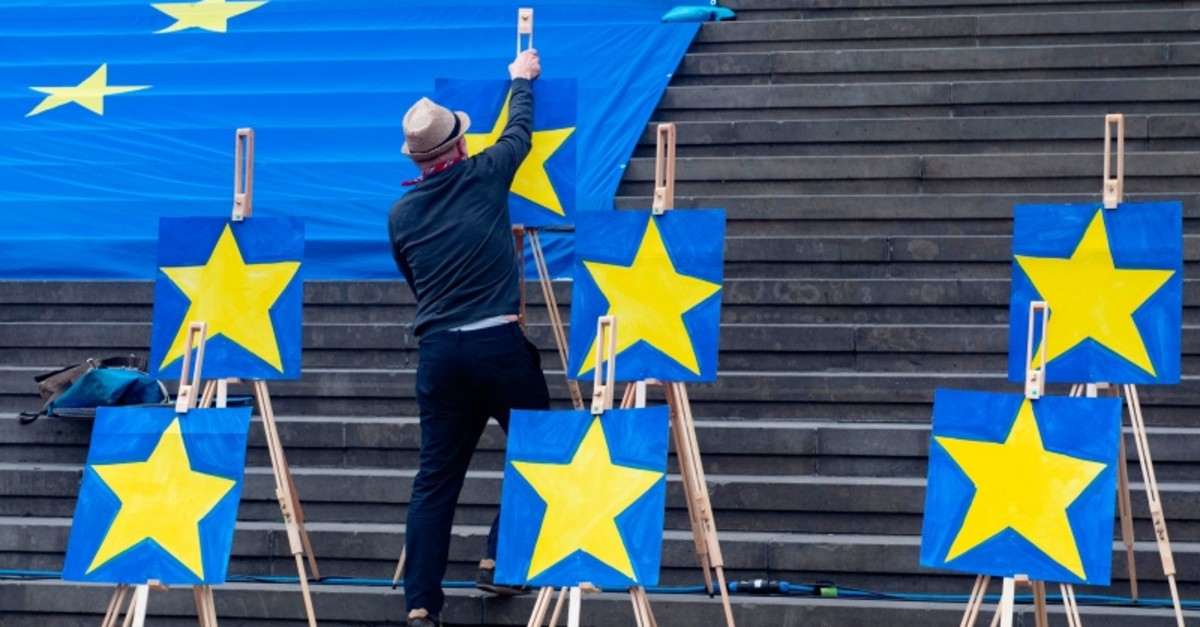 A man sets up canvas stands with European stars during a demonstration of the pro-Europe movement ,Pulse of Europe, in Berlin, on May 26, 2019. (AFP Photo)
by Compiled from Wire Services May 26, 2019 11:16 am

The main conservative group in the European Parliament will remain the largest bloc after Sunday's elections, but has lost ground and will no wield a majority in coalition with its center-left ally.

According to a projection based on partial results and exit polling, and released by the EU parliament, the center-right EPP group is on course to have the most seats in the assembly with 173, down from 216.

But, with the center-left Socialists and Democrats (S&D) projected to win 147 seats, down from 185, the two mainstream parties between them will no longer have a majority and will have to reach out to liberals if they plan to maintain a "cordon sanitaire" and exclude the far-right from decision making.

Under the projection -- which could still shift as results come in -- the liberal ALDE group, now joined by French President Emmanuel Macron's Renaissance movement, could increase its seats from 69 to 102.

The three mainstream parties would thus have a majority in the 751-seat assembly, but only if they can agree a common program and not fall out over nominations to the European Union's most powerful posts.

The main Greens bloc could increase its contingent from 52 to 71, but the main winners from the fall in centrist support could yet be a loose alliance of nationalist and right-wing populists.

Turnout EU-wide was estimated at 51%, the highest in 20 years, implying that more than 200 million citizens across the 28-nation bloc voted in a poll billed as a battle between populists and pro-European forces.

Each previous EU election since the first in 1979 has seen turnout fall, but initial figures from across the 28-nation bloc suggested this year's culture clash has mobilized both populists and those who oppose them.

"I guess that some marginal parties will be less marginal tonight," European Commission president Jean-Claude Juncker said as he cast his vote in his native Luxembourg.

Marine Le Pen's far-right Rassemblement National party secured the most votes in France's election to the European Parliament on Sunday, a result that will greatly strengthen her ability to build a far-right alliance in the European Union.

An exit poll conducted by the Ifop group showed the Rassemblement National securing 24.0% of the vote, more than a point ahead of President Emmanuel Macron's La Republique En Marche list which was projected to win 22.5%.

Definitive final results will be announced by the French interior ministry later on Sunday.

The result is a setback for Macron who has put Europe at the heart of his presidency and had personally invested time in campaigning for the European vote, in part because of the lackluster performance of the top candidate on his list, former Europe minister Nathalie Loiseau.

"The French people have sent a very clear message and a lesson in humility" to Macron, Jordan Bardella, Le Pen's lead candidate, told supporters. "It's him and his politics that have been rejected."

Germany's Greens saw a surge in support as the ruling coalition parties suffered heavy losses in the EU elections, according to projections by public broadcasters ARD and ZDF.

The Greens came in second place for the first time in a nationwide poll with between 20.5% and 22%, behind Chancellor Angela Merkel's conservative bloc on 27.5-28%. Merkel's junior coalition partner, the Social Democrats (SPD), managed only 15.5%.

The far-right Alternative for Germany (AfD) garnered 10.5% of the vote, while the liberal Free Democrats and hard-left Die Linke (The Left) party both achieved 5.5%.

The SPD were also just behind Merkel's Christian Democrats (CDU) in Bremen state elections, according to the ARD/ZDF projections, meaning the center-left party could lose control of the northern city-state for the first time since the end of World War II.

The far-right League emerged as Italy's largest party in Sunday's European parliamentary election, overtaking its coalition partner the 5-Star Movement, which lost a third of its voters in a year, exit polls said.

If confirmed, such a result could alter the balance of power within the argument-plagued government, giving greater authority to League leader Matteo Salvini, who is pushing for swingeing tax cuts in possible defiance of EU budget rules.

Polls predicted the League took between 26.0-31.0% of the vote, up from some 17% at the 2018 national election and 6.2% at the last EU ballot in 2014, with its uncompromising anti-immigrant message boosting its support.

However, earlier this year it had been polling as high as 37%, suggesting its momentum had ground to a halt following months of surging popularity.

The 5-Star, led by another deputy prime minister, Luigi Di Maio, took between 18.5-23.0%, according to polling on four different television stations, compared with 32% last year and 21.1 percent five years ago.

Britain's Brexit Party was ahead with 31.5% of the vote in European Parliament elections, early results showed on Sunday, with the ruling Conservatives falling to fifth place after failing to take Britain out of the European Union.

With more than 10% of the ballots counted, the pro-EU Liberal Democrats were shown in second place, followed by the main opposition Labour Party, the Greens and the Conservatives on 7.5%.

The exit polls for European parliament elections gave New Democracy 33.5% compared to 25% for Syriza, according to a combined survey by the five main private TV stations.

And early results from 15% of polling stations gave New Democracy a lead of over eight percent in local elections too.

"Greece needs a new government... the prime minister must assume his responsibilities, he must resign for the good of the country," he said.

Tsipras responded on Sunday evening by calling for snap elections, saying the results of the election could not be ignored.

Prime Minister Pedro Sanchez was the big winner of European elections in Spain on Sunday with his ruling Socialists coming first, a result he will likely use to wield more influence in the bloc.

With Spain the only major EU country where the Socialists topped the polls, Sanchez has emerged as the big hope for European social democrats.

Results for local and regional elections that took place on the same day were still being counted.

If his Socialists also do well in those as predicted, Sanchez will be in a stronger position as he seeks to form a new government following a general election on April 28.

With more than 85% of votes counted, government spokeswoman Isabel Celaa announced the Socialist Party had come first with close to 33% in the elections to the European Parliament, gaining 20 seats.

They were followed by the conservative Popular Party (PP) which won just over 20%.

Newly-emerged far-right party Vox, meanwhile, got just over 6% of the vote.

That's less than the 10% it won in the general election when it burst into the national parliament.

Chancellor Sebastian Kurz's far-right conservatives have won the EU vote in Austria with 35.4% of the ballots, according to the official result that does not yet include postal ballots.

The Freedom Party (FPOe) lost 1.7 points to 18.1%, only days after Kurz's coalition with the far-right populists broke apart over corruption suspicions against leading FPOe figures.

Both the left-wing/green coalition of the Socialist and Dialogue parties and the right-wing Jobbik party got one seat each, worse than expected.

Voter turnout was above 43%, the highest for an EU parliament election in Hungary, which first took part in the balloting in 2004.