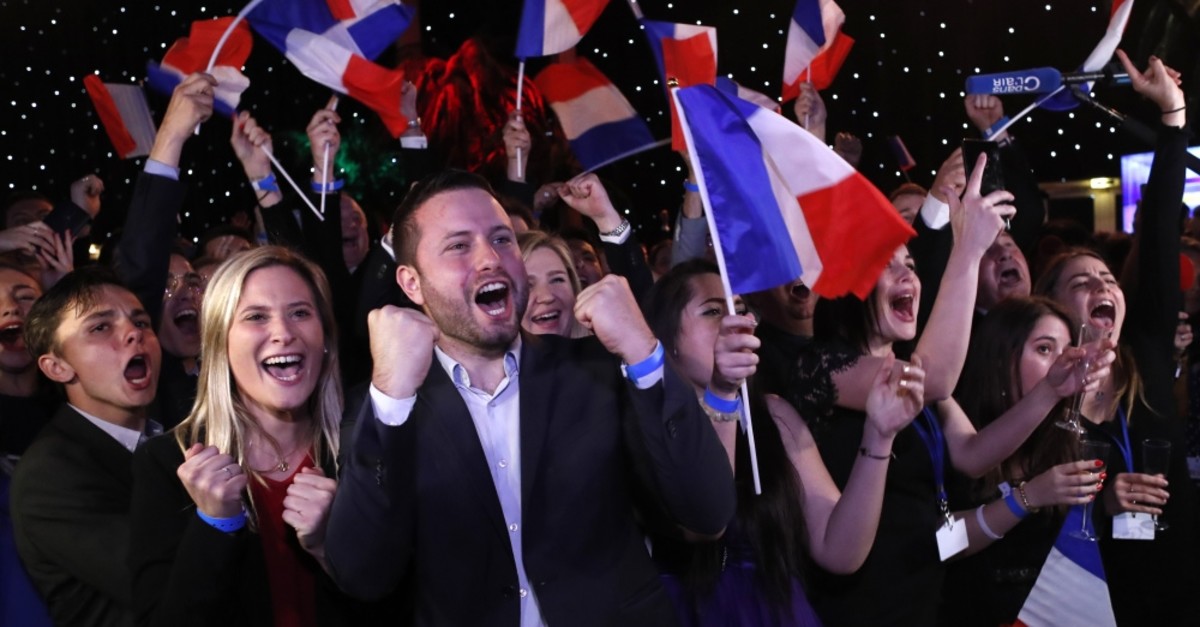 The traditional centrist leaders of Europe were assailed from the far-right and Greens in EU elections that could lead to a rethink in Berlin, Paris and London on the future of the current governments

As the European Parliament elections revealed an altered political landscape where the far-right and environmentalists stand as forces to be reckoned with, major centrist parties suffered big losses, risking the future of the current governments mainly in Britain, France and Germany.

The main center-right and center-left groups lost their combined majority in the 751-seat parliament in the face of a challenge by euroskeptic and nationalist forces of Marine Le Pen, Matteo Salvini and Nigel Farage. The leader of Italy's right-wing League Party, Matteo Salvini, calculated that populist and nationalist parties will control at least 150 seats in the new parliament. Salvini told supporters at party headquarters in Milan yesterday morning that the results of Europe's four-day vote show that "a new Europe is born."

The center-right European People's Party (EPP) was down to 180 members of parliament from 217 and the center-left Progressive Alliance of Socialists and Democrats (S&D) will secure 147 seats, a drop of 40 seats from five years ago. However, it is not enough for a combined majority.

There were big wins for the Greens, who posted double digit scores across Europe's biggest countries, and the Liberals, with both parties likely to play a major role in any future parliamentary coalition. 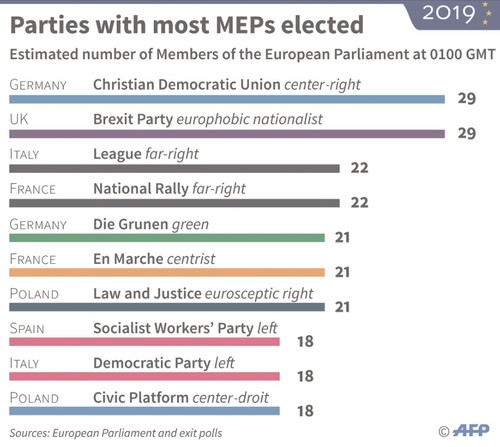 Each previous EU election since the first in 1979 has seen turnout fall, but figures from across the 28-nation bloc were at a 20-year high of 51%, suggesting this year's culture clash has mobilized both populists and those who oppose them. The last time Europeans cast their vote in 2014, turnout stood 42.6%.

Britain will send a large contingent of euroskeptic members to a parliament they want to leave in a few months, after Farage's single-issue Brexit Party trounced the main parties. The anti-EU Brexit party topped European Parliament polls in Britain, results showed yesterday, putting intense pressure on the ruling Conservatives who suffered a historic rout.

The populist party, founded just three months ago, capitalized on public anger over delays to Britain's exit from the European Union, winning almost 32% with almost all votes counted. Prime Minister Theresa May's Conservative party meanwhile slumped to 9%, its worst electoral result since 1832. Almost three years since Britain voted narrowly to leave the EU and barely two months after the originally planned departure date, lawmakers remain at loggerheads over how, when or even whether the country will quit the club it joined in 1973.

For Labour leader Jeremy Corbyn, pressure will mount to embrace a second referendum without qualification, something he has said would be needed to prevent a no-deal Brexit. But what is clear from a vote which many used as a protest is that Brexit, which forced Prime Minister May to say she will resign on June 7 after failing to deliver Britain's departure, risks shattering the election prospects of both the main parties.

The battle between President Emmanuel Macron and far-right leader Marine Le Pen in yesterday's European election in France has ended up with a major loss for the French leader. As predicted by pollsters in the lead-up to the elections, Le Pen's party, which placed first in France during the 2014 election, did the same this year.

Macron's party, the pro-European Republic on the Move (LREM), finished second behind the far-right National Rally (RN) of his archrival Marine Le Pen, but the two parties ended with less than 1 percentage point separating them, on 22.41% and 23.31% respectively. The vote was seen as a test for Macron domestically after months of anti-government protests, while his credibility in Europe as a champion of deeper integration was also judged to be on the line. His priority will now be trying to increase his influence in the European parliament where LREM and its centrist allies will send 23 members to parliament, the same number as Le Pen's RN.

The European elections on Sunday saw Chancellor Angela Merkel's ruling coalition suffer a drastic loss in support to the Greens and, to a lesser extent, the far-right. Green parties make major inroads and become the second-largest party in Germany, ahead of the Social Democrats, for the first time in their history. Merkel's party won 28.9% of the vote and the Social Democrats got 15.8%. Five years ago, Germany's traditionally biggest parties took 35.4% and 27.3%, respectively. Both sets of results were causing soul-searching, in particular in the Social Democratic Party of Germany (SPD), but also in the Christian Democratic Union of Germany/Christian Social Union in Bavaria (CDU/CSU) over the continuation of Merkel's grand coalition government in Berlin. Both the main parties saw their worst-ever results at a European level in Sunday's poll, and the SPD was facing life in opposition in Bremen for the first time since World War II.

Should the outcome, at the EU level and in Bremen, lead to a rethink in Berlin on whether to continue with the broad grand coalition that has ruled Germany for 10 of the past 14 years, a political era will come to an end in both Germany and in Europe. Merkel, chancellor since November 2005, has indicated she will not stand in the next elections.