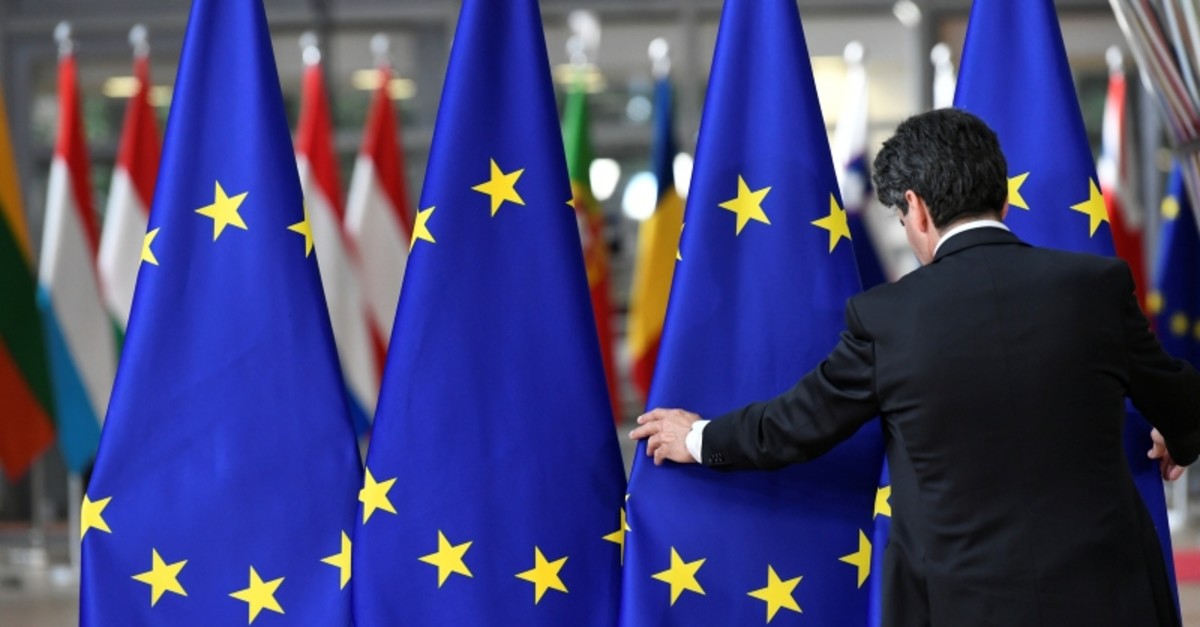 A staff member sets up European Union flags ahead of an EU leaders summit after European Parliament elections to discuss who should run the EU executive for the next five years, in Brussels, Belgium, May 28, 2019. (Reuters Photo)
by May 29, 2019 2:47 pm

The European Commission on Wednesday urged the European Union to start membership talks with Albania and North Macedonia immediately, saying they had delivered on reforms demanded by Brussels.

The two Balkan states aspire to join the EU but their accession bids have stalled as public opinion and politicians in the bloc — particularly France — have grown cold at the prospect of bringing in new members.

Tirana in particular is growing impatient, with Prime Minister Edi Rama warning in a French Press Agency (AFP) interview last month that the delay was hurting the Balkans and could reignite simmering tensions in the region.

The 28 EU member states last year agreed to start accession talks for both countries in June this year, as long as they met certain conditions, particularly improvements in the fight against crime and corruption.

Reporting on the progress made, EU Enlargement Commissioner Johannes Hahn said Albania and North Macedonia had taken major steps, and the European Council — the member states — must respond.

"Both countries have delivered on reforms, in particular in areas set by the council unanimously in June 2018. On that basis the commission recommends the council opens accession negotiations now with both Albania and North Macedonia," he told the foreign affairs committee of the European Parliament.

"To remain credible the EU must stick to its commitments and respond clearly and positively when countries fulfill theirs."

EU leaders are expected to consider the recommendation at a summit in Brussels next month before deciding whether to start the formal talks process.

North Macedonia expects a reward after a difficult diplomatic compromise that involved changing its name to settle a dispute with Greece — a deal that also opened the way for Skopje to join NATO.

Montenegro and Serbia are the frontrunners to join the EU from the Balkans, having already started the formal membership process, but Hahn said they needed to "urgently" step up their efforts to improve the rule of law if they wanted their bids to progress.

But powerful EU member France has been particularly vocal in its reluctance to admit new members to the club, with President Emmanuel Macron insisting there must be "a deepening and improvement" of the existing bloc before any more enlargement.