EU caught in middle of power struggle to find next leader 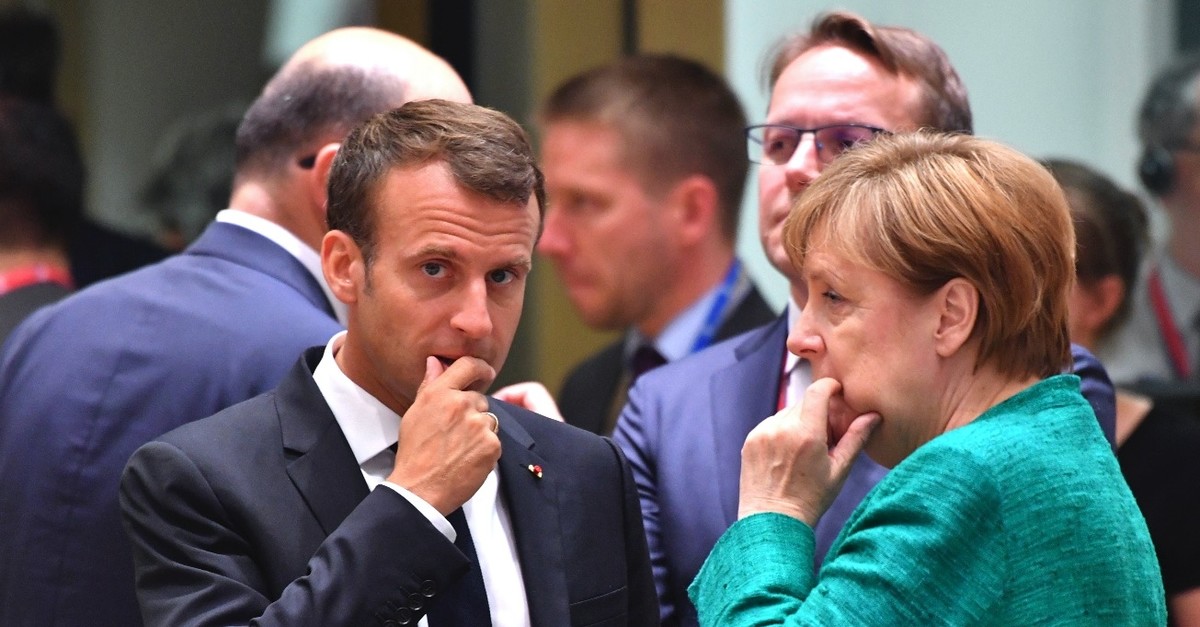 German Chancellor Angela Merkel speaks with French President Emmanuel Macron at an EU summit, Brussels, June 28, 2018.
by Daily Sabah with Agencies
May 30, 2019 12:05 am

After the European Parliament elections, the power struggle to find the next EU leader has started, with France and Germany at odds over the best candidate to lead the commission

The leaders of the 28 EU member states were in Brussels for a summit on Tuesday that highlighted the wrangling among major powers France and Germany over who is best suited to lead the EU's powerful executive arm, the European Commission, for the next five years.

Within the context of this power struggle, EU leaders tasked the EU Council President Donald Tusk to consult with the European Parliament and national leaders to come up with names for the key EU institutions by the next summit on June 21.

As Sunday's elections shredded comfortable old political alliances and raised troubling questions about the future of the European project, the leaders want to show they can respond quickly to people's concerns. The aim is to name all four top jobs; the commission chief, a replacement for Donald Tusk as European Council president, a new foreign policy chief and head of the European Central Bank. Former Luxembourg Premier Jean-Claude Juncker heads the commission, which proposes EU laws and ensures they are respected, until Oct. 31.

However, several EU leaders, notably French President Emmanuel Macron, are at odds with the parliament, whose political groups have nominated candidates for the commission presidency under a system of lead candidates that is not supported by all. EU leaders have previously stressed that they will not be restricted by the so-called Spitzenkandidaten system or "lead candidates" in German, which Macron described on Tuesday as a "prison." Under the system, EU-wide political groups nominate their preferred choice of commission president, with the understanding that the candidate of the group that performs best in the European Parliament elections should have first dibs on the post. The Spitzenkandidaten thus give a face to each of the European political groups for voters to identify with.

Proponents of the system say that this makes the European Union more democratic and transparent. Critics argue, however, that the system is deeply flawed as European political groups don't have trans-national lists, meaning that any lead candidate can only be elected in his or her own country.

German Chancellor Angela Merkel has put her weight behind the lead candidate of the European People's Party, parliamentary chief Manfred Weber, a fellow German from the Bavarian sister party of her Christian Democratic Union (CDU). But Macron insisted Tuesday that policies must come before names.

The French president, whose party is joining forces with a new pro-business liberal group in the European Parliament for the first time, insisted the choices should represent the new political project that European voters are demanding.

"The new order means one thing: It's that we cannot just repeat the old habits," Macron told reporters. "It is important to me that these nominations have parity, that we have two men and two women. It is important for me to have the best profiles possible," he said, noting that there must "be balance in terms of political leanings and in terms of geography." Other leaders, too, said the aim is to have two women in top posts.

Last week's elections saw Europe's mainstream center-right and center-left parties lose seats in the European Parliament. The conservative European People's party, which has been the largest group in the assembly, and the Socialists and Democrats have held a majority in the body for 40 years. But voters concerned about climate change, migration or security turned instead to the Greens, the pro-business ALDE group or far-right parties. As a result, it is unclear what workable majority will emerge in the assembly, which sits in Brussels and Strasbourg when lawmakers gather in July, especially as the leaders and party groups jockey for position.