'They have got to get the deal closed': Trump wades into UK's Brexit crisis 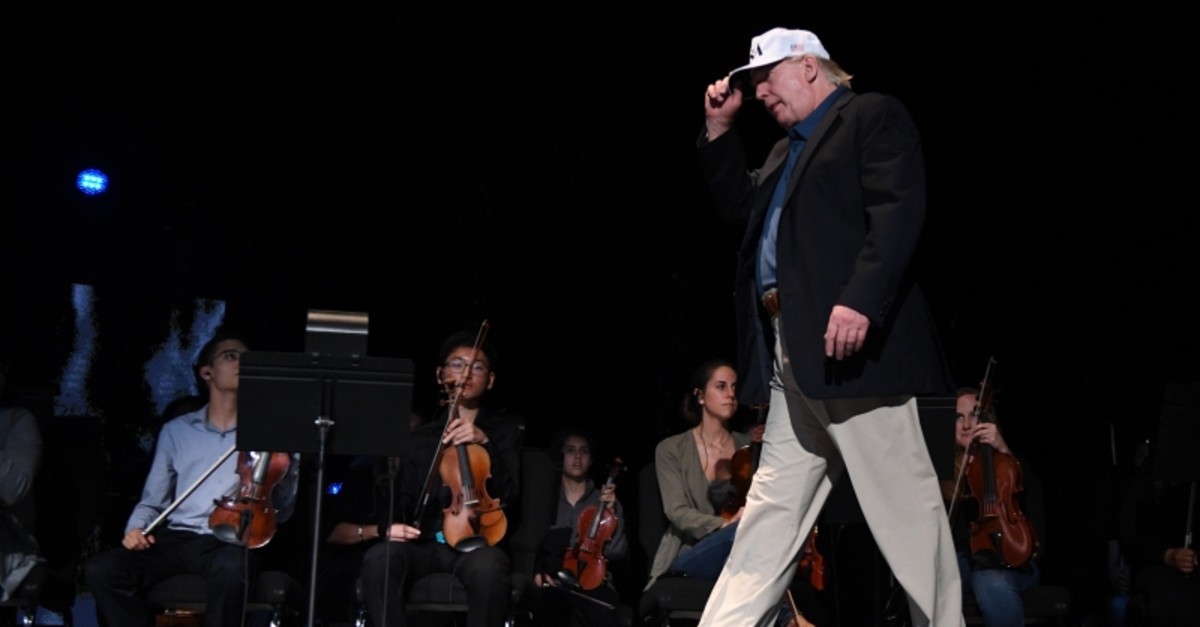 US President Donald Trump visits McLean Bible Church in Vienna, Virginia on June 2, 2019, to visit with Pastor David Platt and pray for the victims and community of Virginia Beach. (AFP Photo)
by Jun 03, 2019 12:54 am

U.S. President Donald Trump arrives in Britain on Monday on a state visit laden with diplomatic peril, having already humiliated outgoing Prime Minister Theresa May over Brexit and challenged her to be tougher in dealing with China's Huawei.

Trump and his wife, Melania, will be treated to a display of British royal pageantry during the June 3-5 visit: lunch with Queen Elizabeth, tea with heir Prince Charles, a banquet at Buckingham Palace and a tour of Westminster Abbey, coronation church of English monarchs for 1,000 years.

Beyond the pomp, though, the proudly unpredictable 45th U.S. president also brings demands: He has praised a more radical Brexit-supporting potential successor to May and his envoys have urged a tougher British stance towards telecoms giant Huawei.

May said it was a "significant week for the special relationship and an opportunity to further strengthen our already close partnership."

She also said the UK-US security relationship was "deeper, broader and more advanced than with anyone else" in comments released by her office before Trump's arrival.

In an interview with the Sunday Times newspaper, Trump said the next British leader should send arch-Brexiteer Nigel Farage to conduct talks with the EU. Britain must leave the EU this year, Trump said.

"If they don't get what they want, I would walk away. If you don't get a fair deal, you walk away."

Trump repeated his backing for those candidates to succeed May who have said Britain must leave on the due date of Oct. 31 with or without a deal.

Those candidates include former foreign secretary Boris Johnson, whom Trump praised in an interview with the Sun newspaper on Friday, along with former Brexit minister Dominic Raab and interior minister Sajid Javid.

Trump said it was a mistake for the Conservatives not to involve Farage, the Brexit Party leader, in talks with Brussels after his success in European Parliament elections last month.

"I like Nigel a lot. He has a lot to offer - he is a very smart person," Trump said. "They won't bring him in but think how well they would do if they did. They just haven't figured that out yet."

On the Brexit divorce bill, Trump said: "If I were them, I wouldn't pay 50 billion dollars. That is a tremendous number."

A meeting with either Johnson, favourite to succeed May, or Farage, a bombastic anti-establishment campaigner, would be seen as a snub for May who is bowing out after failing to negotiate a Brexit deal that parliament could ratify.

British officials are privately concerned that Trump could heap further ignominy on May, who battled in vain to unify her ruling Conservatives behind a deal and cried while announcing the end of her premiership in Downing Street last month.

On his last visit to the United Kingdom, in July last year, Trump shocked Britain's political establishment by hammering May's Brexit negotiation for being too weak with the EU and by praising rival Johnson as a "great" potential prime minister.

Trump's national security adviser John Bolton said on Thursday the United States did not want to "get in the middle" of Brexit or a discussion of the next government's policies.

Bolton dismissed concerns about Brexit: "You know, America declared its independence once – we made out okay," he quipped.

Brexit is the most significant geopolitical move for the United Kingdom since World War Two and if it ever happens then London will be more reliant on the United States as ties loosen with the other 27 members of the EU.

At a meeting with May, Trump will warn Britain that security cooperation could be hurt if London allows China's Huawei a role in building parts of the 5G network, the next generation of cellular technology.

The Trump administration has told allies not to use its 5G technology and equipment because of fears it would allow China to spy on sensitive communications and data. Huawei denies it is, or could be, a vehicle for Chinese intelligence.

Secretary of State Mike Pompeo told Britain last month it needed to change its attitude towards China and Huawei, casting the world's second largest economy as a threat to the West similar to that once posed by the Soviet Union.

Britain's so-called special relationship with the United States is an enduring alliance, but some British voters see Trump as crude, volatile and opposed to their values on issues ranging from global warming to his treatment of women.

A blimp depicting Trump as a snarling, nappy-clad baby will fly outside Britain's parliament during the visit while protesters plan a "carnival of resistance" in central London.

"Trump is coming to Britain to commemorate the defeat of fascism after D-Day while at the very same time pursuing a dangerous far-right agenda and fanning the flames of hatred," said Matt Bonner, its designer.

The first day of the visit, Monday, culminates in a lavish state banquet at Buckingham Palace - where men wear white tie coats with tails and women evening gowns.

Jeremy Corbyn, the socialist leader of Britain's opposition Labour Party, who has declined an invitation to attend the state banquet, scolded Trump for getting involved in British politics.

"President Trump's attempt to decide who will be Britain's next prime minister is an entirely unacceptable interference in our country's democracy," Corbyn said.

The second day will focus on politics, including a breakfast with business leaders, talks with May in 10 Downing Street, a news conference and a dinner at the U.S. ambassador's residence.

On Wednesday, Trump joins the queen and veterans to mark the 75th anniversary of the D-Day landings in the southern English city of Portsmouth, and also makes a trip to Ireland. He will attend official D-Day ceremonies in France on Thursday.