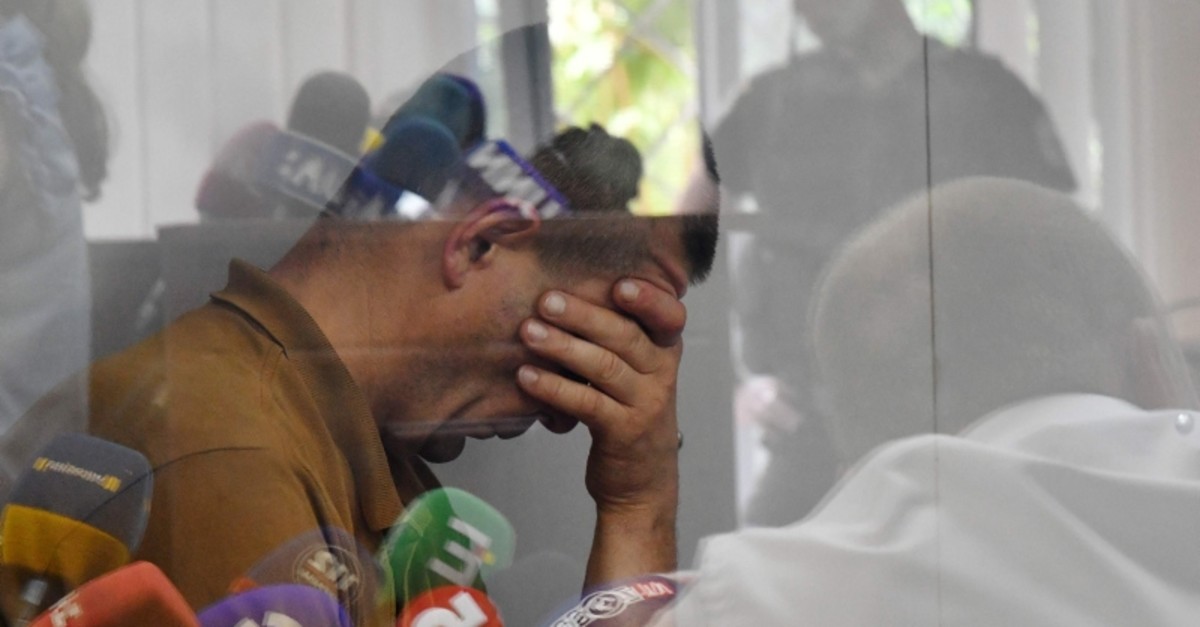 Police officer Volodymyr Petrovets, suspected of murdering a 5-year old boy, waits inside a holding cell during a hearing about placing him under arrest pending trial in Kiev's district court on June 4, 2019. (AFP Photo)
by Compiled from Wire Services Jun 04, 2019 4:08 pm

Two Ukrainian police officers were arrested on suspicion of murder on Tuesday, accused of fatally shooting a five-year-old boy while drunkenly firing weapons at cans and bottles in the courtyard of an apartment building, officials said.

The National Bureau of Investigations said the shooting took place last Friday when the two patrol officers were drinking alcohol in a yard of a residential house in the town of Pereyaslav-Khmelnytsky, 70 kilometers (40 miles) southwest of Kiev.

While shooting at metal cans, they "hit a five-year-old boy," the investigators said in a statement.

The boy Kyrylo Tliavov was taken to hospital with a head injury last week and died late on Monday,

The officers initially denied any guilt, claiming he had slipped and hit his head on a rock. They were detained at the weekend and a court in Kiev on Tuesday ordered them to be held without bail pending trial. If found guilty of murder, they could serve a life sentence.

The incident sparked protests by activists outside the interior ministry building. They lit flares and held placards saying "the police kill people."

The head of the provincial police force in the Kiev region resigned and asked to be transferred to the Donbass region where Ukraine is fighting a conflict with Russian-backed separatists.

National police chief Sergiy Knyazev said he had dismissed the chief of Kiev regional police over the incident.

"The entire ranks of the police express deep condolences over the death of Kyrylo. This is an enormous tragedy for the parents," he said.

"I, as President and as a father, want to assure you that I will do everything to ensure that the guilty are justly punished," President Volodymyr Zelenskiy wrote on Facebook.

"No softening. No attempt to hide this matter. This tragedy should become a lesson. Those who have to take care of the safety of citizens should remember their responsibility."

A lawyer for one of the officers told TV channel 112 that it was too early to know who was culpable.

"Nobody wanted to kill this boy, who was five years old," Andriy Chichirkin said.

Investigators found cartridges, cups and cans near the boy's house which they believed were used during the incident.

Activists condemned the killing as the latest manifestation of impunity in the police despite attempts by previous president Petro Poroshenko to reform the notoriously corrupt and lawless force, demanding the resignation of Interior Minister Arsen Avakov. Avakov has not commented on the case.

Ukrainian police have previously been the target of mass protests, including in 2012 when officers were accused of helping cover up the rape and murder of an 18-year-old girl because the attackers' parents had political connections.

Tackling corruption in Ukraine's police force was a priority for the authorities who came to power following the 2014 Maidan protests that toppled a Russian-backed president, but critics say the change has been patchy.

"In a normal country, the interior minister quits after terrible incidents like this," the Anti-Corruption Action Centre, a non-governmental organisation, wrote on Facebook.

Activists on social media called for another protest on Wednesday and several organisations said they were planning protests across Ukraine on Tuesday evening.

Several parties in Ukraine's parliament also called for the police chief to take the floor to give an explanation to lawmakers.