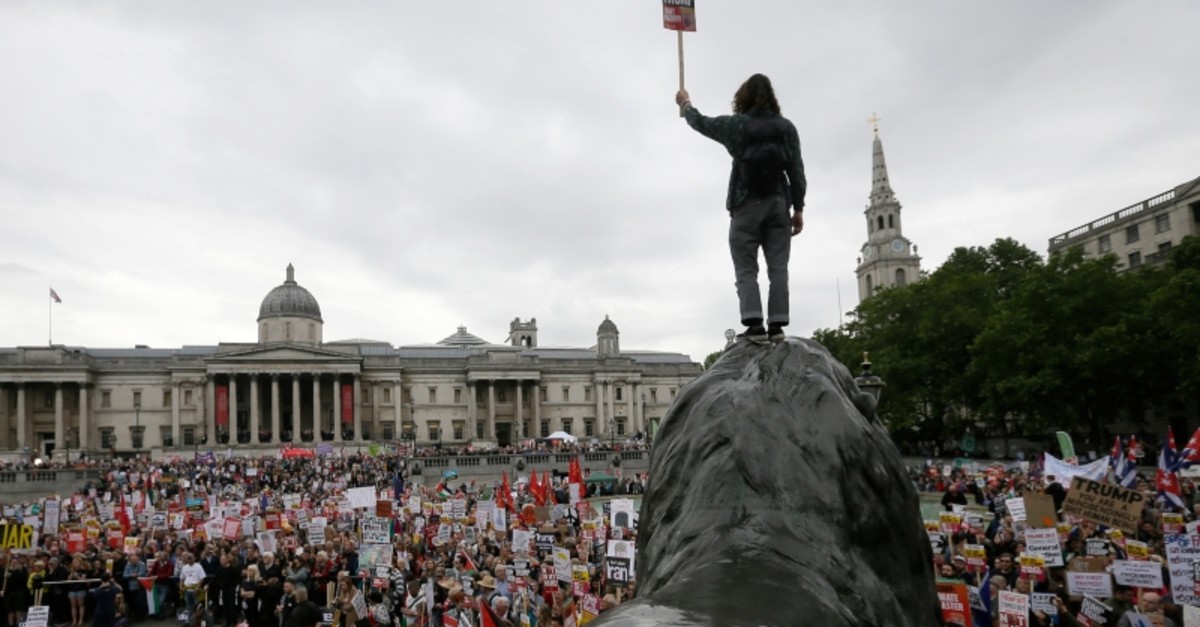 Thousands of people protested in central London on Tuesday against U.S. President Donald Trump's pomp-laden state visit to Britain, but numbers were far down from the tens of thousands who gathered to oppose his visit last year.

Protesters waved witty and sometimes rude placards at what organizers called a "Carnival of Resistance" in Trafalgar Square while Prime Minister Theresa May was in talks with the president a short distance away in Downing Street after Queen Elizabeth II gave him a royal welcome, including a state banquet at Buckingham Palace, on Monday at the start of his three-day visit.

"We have to get out there again in a diverse Carnival of Resistance that shows we reject Trump's divisive politics and policies of bigotry, hate and greed," the Stop Trump coalition told supporters, after tens of thousands protested against Trump during his visit last year. 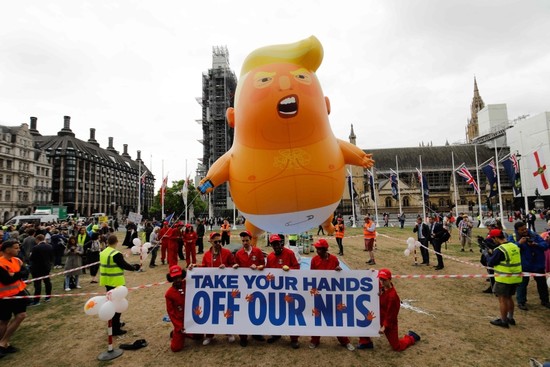 Anti-Trump demonstrators with a banner that reads "take your hands off out NHS" pose in front of a giant balloon depicting US President Donald Trump as an orange baby in Parliament Square in London on June 4, 2019. (AFP Photo)

Protesters have also flown a 6-meter inflatable orange baby styled as Trump again in nearby Parliament Square on Tuesday morning. The blimp proved a media hit during Trump's last visit to London.

Leo Murray, 42, the co-creator of the blimp, said: "We're trying to remind the president how unwelcome he is in this country.

"We're also, in a light-hearted way, trying to articulate the strength of feeling against Donald Trump and his politics of hate," he said. "We want to put a smile on people's faces as well as make a serious point."

Around 100 activists counted down from 10 to one for the launch of the blimp, which was first used during Trump's visit to London last year. It was tethered a few meters off the ground. 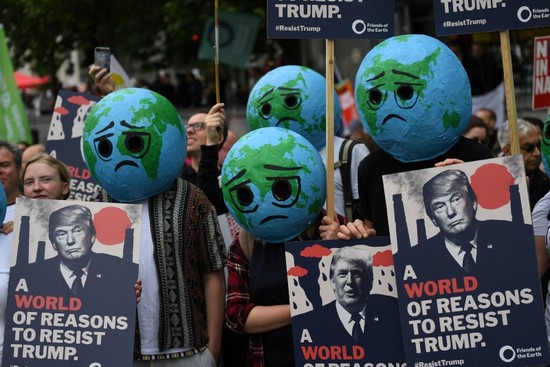 There was a festival atmosphere at the rally, which will be addressed later by Britain's opposition Labour Party leader Jeremy Corbyn and other opposition lawmakers planned to join the protest.

One group came dressed in the red cloaks and bonnets of characters from Margaret Atwood's "The Handmaid's Tale," which is set in a dystopian, misogynist future America.

Emily Thornberry, Labour's foreign affairs spokeswoman, said Trump was "a sexual predator" and a racist who did not deserve the honor of a state visit hosted by Queen Elizabeth II.

Thornberry told the BBC that the leader of Britain's most important ally should be stood up to "the way you deal with a bully" because "if you bow down in front of them you just get kicked harder."

Among Britons, Trump is one of the best-known but least-liked foreign leaders. Just 21% of people surveyed by YouGov had a "positive opinion" of him. Among women, that figure shrank to 14%. 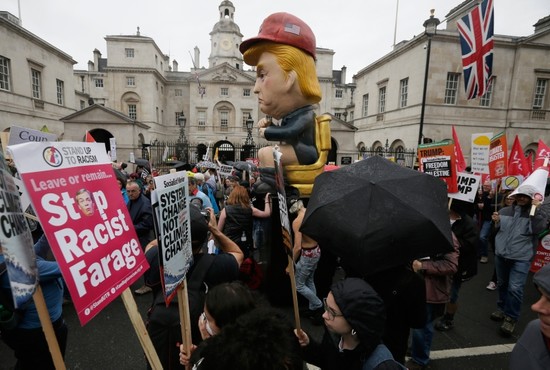 Lessem's commissioned work depicts the U.S. president tweeting from the toilet while repeating Trumpisms such as "You are fake news" and "I'm a very stable genius."

The placards read: "Trump stay out! We are quite capable of cocking up our own politics," "You can't come over racism" and "Lock him in the tower."

"Trump is an ignorant, 70-year-old man who has lived a life of privilege," said Anna Fenton, 23, a marketing manager from London carrying a sign reading "Ugh, where do I even start?"

Fenton said she was protesting to show solidarity with "people that Trump's language and policies have harmed," including women and lesbian, gay, bisexual, and transgender people.

The crowd, of a several thousand strong, was far down on the tens of thousands who protested when Trump first visited Britain as president in July 2018.

There were small pockets of support. A few men wearing red caps with "Make America Great Again" walked among the crowd. Trump supporters said the protests against him were an insult to the leader of the United Kingdom's most powerful ally.

Lewis Metcalfe said he came to the city from his home in northern England to show support for the president.

"I'm obviously going to be a minority today," said Metcalfe, who wore a "MAGA" cap.

"I don't agree with all his policies. He's not the greatest president in the world, but he does get things done."

Trump dined with the queen at Buckingham Palace and took tea with Prince Charles on Monday, the first day of his three-day visit.

Things are likely to become more awkward on Tuesday when he meets May, who is in the final weeks of her premiership. The two leaders have sharply differing views on issues including Iran, Brexit and Chinese telecoms firm Huawei.

The state dinner held in the president's honour was boycotted by several lawmakers, including the leader of Britain's Liberal Democrat party as well as Corbyn and other senior Labour figures.

The U.S. president's supporters said it was an insult to snub the leader of Britain's closest ally. But the demonstrators have received tactical support from Mayor of London Sadiq Khan, who has repeatedly clashed with the president and who gave permission to fly the blimp.

Trump called the mayor a "stone-cold loser" shortly before he arrived in Britain and has in the past accused him of failing to do enough to stop deadly terror attacks in London.

Trump said he is "loved" in Britain despite the protests. He said he was closer to Britain than any other American leader, citing his mother's Scottish roots and the two golf courses he owns in the country.

"Tremendous crowds of well wishers and people that love our country," Trump said in a tweet on Monday.

"Haven't seen any protests yet, but I'm sure the Fake News will be working hard to find them. Great love all around." 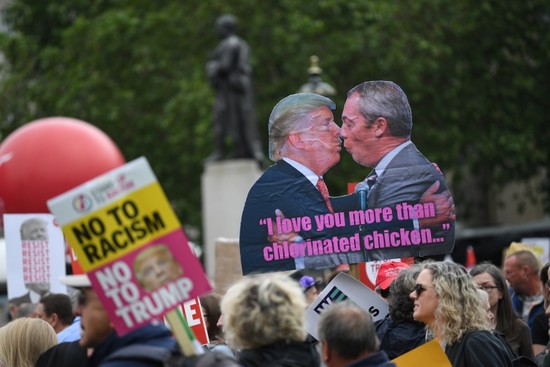 There was a heavy police presence in Whitehall, the center of Britain's government, on Tuesday, with metal barriers and concrete blocks used to close the southern part of the street.

Protesters from all over Britain have travelled to London to join the demonstrations. Other protests against Trump's visit are planned in 14 cities and towns.

London's Metropolitan police said 2,591 officers were deployed on Monday for the visit.

Scott Lucas, a professor of international and American studies at the University of Birmingham, said other U.S. presidents such as Ronald Reagan and George W. Bush have faced large protests in Britain.

He said the protests typically tend to be larger for American presidents than leaders from other countries such as China or Saudi Arabia because the two countries are historic allies.

"America is our friend and you have to be able to speak to your friends in a certain way," he said.