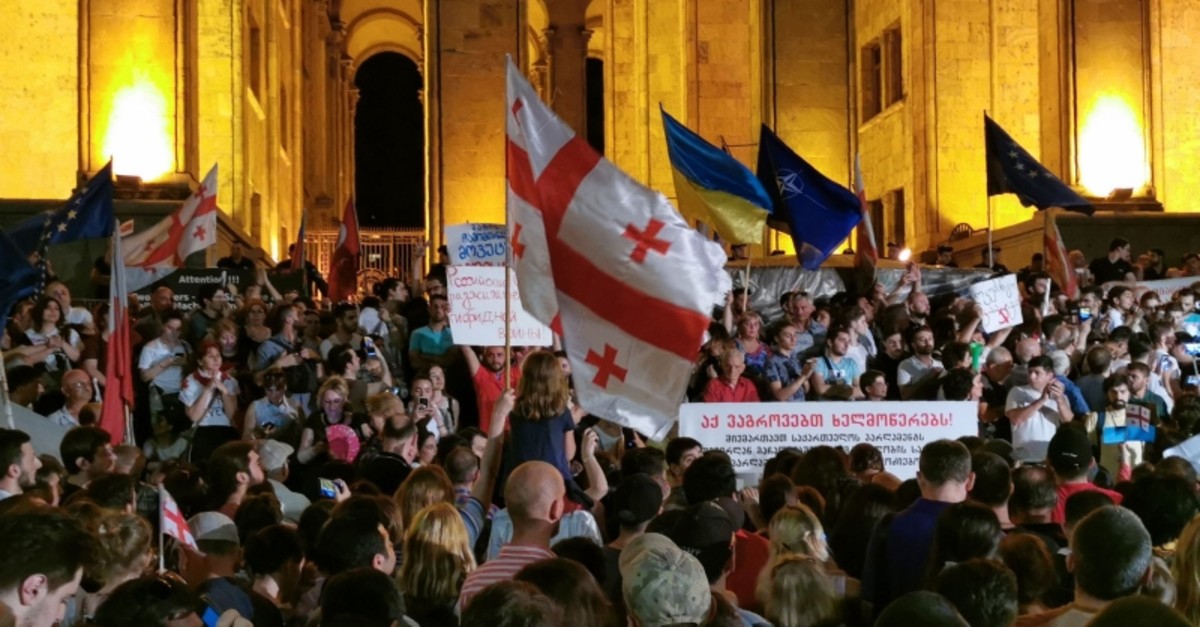 Thousands of protesters tried to storm the parliament building in the Georgian capital of Tbilisi on Thursday after a controversial address to lawmakers by a Russian deputy, prompting violent clashes that left at least 240 people injured and the speaker's resignation.

The unrest was sparked by the appearance Thursday of Russian legislator Sergei Gavrilov in the building as part of an assembly of legislators from Orthodox Christian countries. Gavrilov's support for independence for the Georgian breakaway regions of Abkhazia and South Ossetia and his support of Russian President Vladimir Putin has stoked animosity in Georgia. Police turned back an attempt by the crowd to storm the building.

Kobakhidze, who is out of the country on an official visit, has handed in his resignation on Friday, Kakha Kaladze, one of the leaders of the ruling Georgian Dream party, told reporters. He had served in the post for nearly three years.

The decision was taken after a leadership meeting of the Georgian Dream party. In a statement, Georgian Dream said the protests had painted a "grave picture" of public anger. Kobakhidze's resignation showed that the party maintained a "high standard of accountability" with the people.

The deputy health minister said at least 240 people - including 160 protesters and 80 officers - were injured in a night of clashes in the Georgian capital Tbilisi on Thursday. Riot police fired rubber bullets and tear gas and unleashed water cannons on protesters outside Georgia's parliament building. More than 100 people are still in the hospital, and two people lost eyes because of the rubber bullets, according to Giorgi Kordzakhiya, director of Tbilisi's New Hospital.

President Salome Zurabishvili cut short her trip to Belarus to return to the capital to deal with the crisis. Meanwhile, the Georgian opposition has called for a new protest outside the parliament on Friday evening, Grigol Vashadze, who lost to Zurabishvili in last year's runoff, said on Rustavi 2 TV.

Russian Communist lawmaker Gavrilov was speaking during an annual meeting of the Inter-parliamentary Assembly on Orthodoxy (IAO), a forum of lawmakers from predominantly Orthodox countries.

The Russian lawmaker's presence in fiercely pro-Western Georgia's parliament prompted outrage in the ex-Soviet nation which in 2008 fought and lost a brief but bloody war with Moscow over the breakaway regions of Abkhazia and South Ossetia.

The two countries broke off diplomatic relations after the war but steps have been made in recent years to restore ties, including Georgia scrapping visitor visas for Russians and Russia lifting a ban on Georgian wine imports. But animosity toward Russia is still strong due to the Kremlin's support of the two separatist governments.

The visit had already prompted complaints, but the anger turned into a street protest after Gavrilov sat in the chair of the Georgian parliament speaker during a session of the assembly.

He called the public outpouring "genuine" but said that the protest was hijacked by "the leaders of the destructive opposition who violated the law and the Constitution."

Many protesters held Georgian and EU flags and placards that read "Russia is an occupier."

"This is a spontaneous protest by ordinary Georgians, it has not been organized by any political party," a lawmaker from opposition European Georgia party, Giga Bokeria, told French Press Agency (AFP) at the rally.

Gavrilov on Friday blamed the clashes on "radical groups" who were trying to stage a "coup." Speaking on state Rossiya 24 TV channel, Gavrilov rejected reports that he was fighting on the side of the separatists in Georgia's Abkhazia, insisting that he had only been there on "humanitarian missions."

Russian officials reacted to the protests with anger, blaming Georgian politicians trying to undermine the slow thaw in relations between the two countries.

Kremlin spokesman Dmitry Peskov mentioned thousands of Russian tourists vacationing in this South Caucasus nation as one of the reasons Moscow is concerned about what he has called an anti-Russian "provocation."

Georgian oligarch Bidzina Ivanishvili — widely believed to be calling the shots in Georgia as the leader of his ruling Georgian Dream party — said in a statement he "fully shares the sincere outrage of the Georgian citizens."

"It is unacceptable that a representative of the occupier country chairs a forum in the Georgian parliament," Ivanishvili said.

He added he had told speaker Kobakhidze, to "immediately suspend" the IAO session.

Headquartered in Athens, the IAO is a permanent, international forum of MPs from predominantly Orthodox-Christian countries.

With parliamentary polls set for next year, opposition groups are also seeking to capitalize on discontent with the ruling Georgian Dream party over the failure to kick-start a stagnant economy.

The United Opposition alliance has demanded snap parliamentary polls and the resignation of the interior minister.

"Peaceful mass protest will continue until these demands are met," its leader Grigol Vashadze told AFP, adding that a fresh rally would start at 7 pm (GMT 1500) on Friday.

A 2003 "Rose Revolution" pushed out the country's Soviet-era leadership and brought in Saakashvili, who served until 2013 and now lives in self-imposed exile as a Ukrainian citizen.

Georgia and its Soviet-era master Russia have long been at loggerheads over Tbilisi's bid to join the European Union and NATO. Saakashvili's moves to restore Georgian authority in Abkhazia, de-facto independent since 1993, and reduce the autonomy of Adjaria and South Ossetia increased tensions with the spiraling confrontation culminating in a full-out war on August 8, 2008.

The Russian army swept into Georgia — bombing targets and occupying large swathes of territory — after Tbilisi launched a large-scale military operation against South Ossetian separatist forces who had been shelling Georgian villages.

Over just five days, Russia defeated Georgia's small military and the hostilities ended with a ceasefire mediated by France's then-president Nicolas Sarkozy, who at the time held the EU's rotating presidency.

After the war, which claimed the lives of hundreds of soldiers and civilians from both sides, Moscow recognized South Ossetia and Abkhazia as independent states where it then stationed permanent military bases.

Tbilisi and its Western allies have denounced the move as an "illegal military occupation."

The two regions constitute 20 percent of the country's territory.