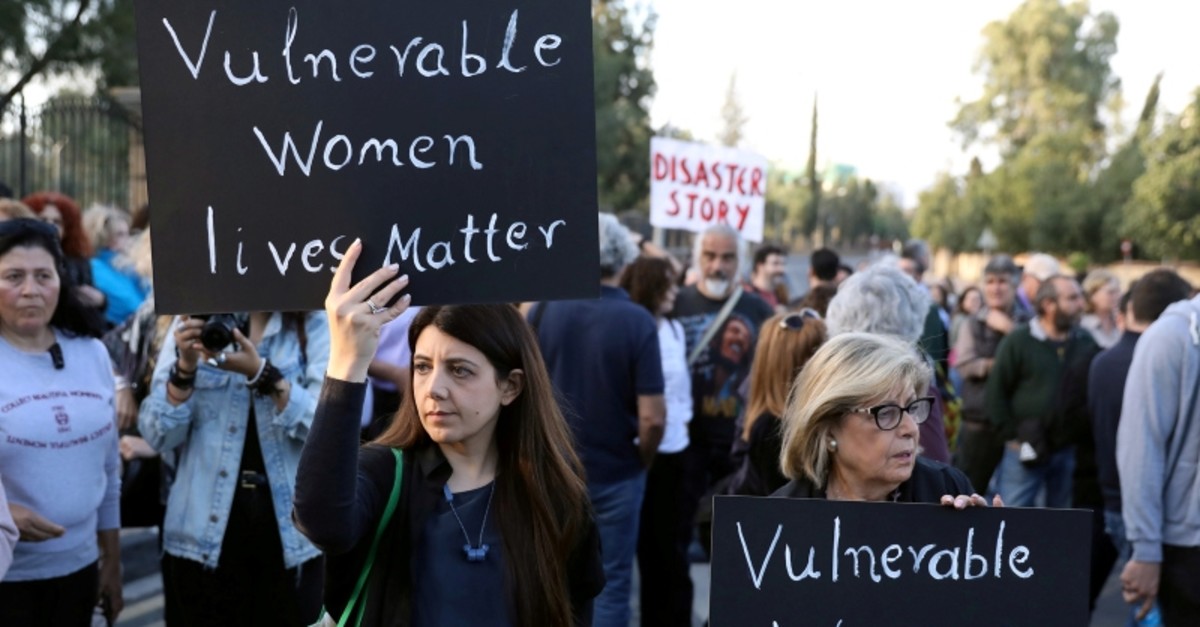 People attend hold placards during a public gathering in memory of the victims of a suspected serial killer, outside the Presidential Palace in Nicosia, Greek Cyprus, May 3, 2019. (Reuters Photo)
by Compiled from Wire Services Jun 24, 2019 1:25 pm

A Greek Cypriot army captain who murdered five women and two children was handed seven life sentences Monday after pleading guilty in a serial killing case that has shocked the Mediterranean island.

In a ruling seen by AFP, a panel of three judges at the Nicosia Criminal Court said that 35-year-old Nikos Metaxas had "embarked on a campaign to kill defenseless women."

The case, involving the worst peace-time atrocities against women in Cyprus in memory, has triggered outrage and horror on an island where serious crime is relatively rare, and forced the resignation of the Greek Cypriot justice minister and the police chief.

Metaxas had been charged with premeditated murder and abduction of the seven - who came from the Philippines, Romania and Nepal - between Sept. 2016 and July 2018. The two children, aged six and eight, were daughters of two of the women.

Metaxas was taken under heavy security on Monday to a courthouse in the capital Nicosia wearing a bullet-proof vest, and appeared without a lawyer.

He broke down in tears as police read the indictment against him. "I have committed abhorrent crimes," he said, expressing condolences to the families of the victims.

A guilty plea in the Greek Cyprus judicial process means the court will hear the facts of the case and then proceed to sentencing. He faces seven life sentences. The court is expected to deliver its verdict later on Monday.

Police say the accused met the women online. The victims were mostly employed as housekeepers on the island and disappeared between September 2016 and August 2018.

The police chief was sacked and the justice minister resigned following accounts of bungled investigations by police who did not take the disappearances seriously because the women were foreign.

The first victim was found dead by tourists shooting pictures at a mining shaft in late April, unraveling the macabre killing spree. The last victim discovered, the 6-year-old child, was found in a lake on July 12.
Last Update: Jun 24, 2019 3:42 pm
RELATED TOPICS