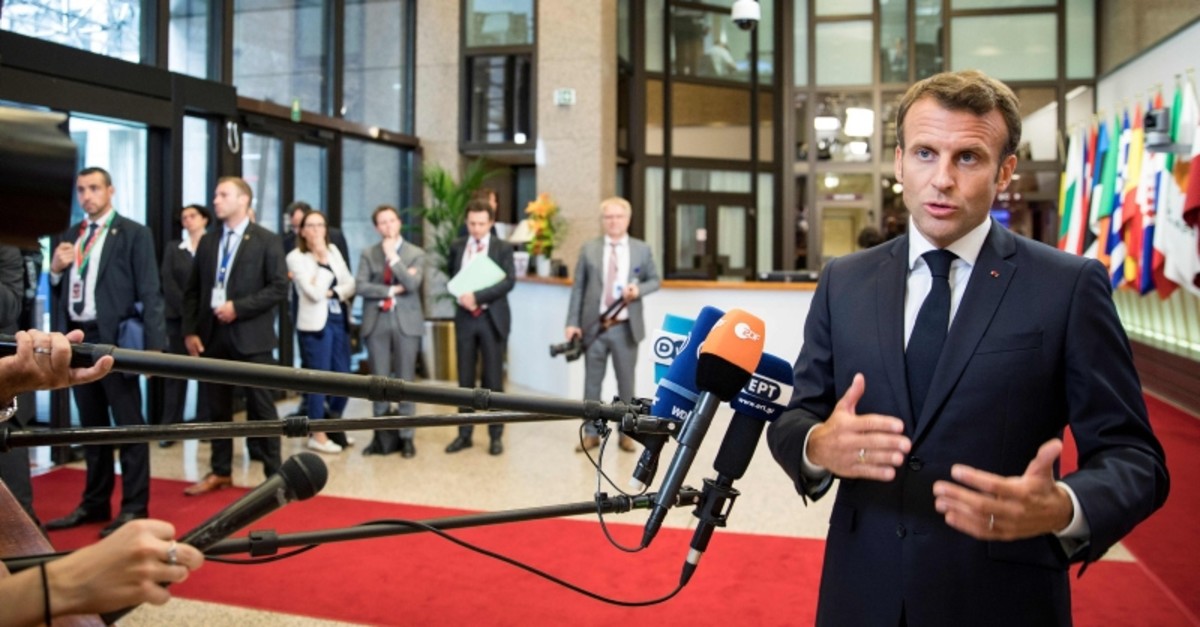 France's President Emmanuel Macron gestures as he speaks to the press at the end of a EU summit at the Europa building in Brussels, on July 1, 2019. (AFP Photo)
by Compiled from Wire Services
Jul 01, 2019 3:44 pm
Almost a full day after sitting down to pick candidates for the European Union's prime political posts, weary EU leaders broke off their talks Monday amid deep divisions over who should run the European project for at least the next five years.

After a full night of one-on-one meetings, trilateral talks, and group discussions — including sitting down over breakfast — EU Council President Donald Tusk called a halt, and said the summit should reconvene at 1100 local time (0900 GMT) on Tuesday.

French President Emmanuel Macron lamented the meeting as a "failure," and said the summit "gives an image of Europe that is not serious" due to the stalemate.

This failure, he said, should lead to "deep changes" to how the EU operates.

Shortly after the delay was announced, an EU official said the European Commission would also delay its decision on Italy's debt because of the summit.

The EU executive had been expected to decide at its weekly meeting on Tuesday whether to recommend disciplinary action against Italy over its growing debt. The official said no date has been set for when the Commission will meet on this issue.

Already beset by crises over Brexit and damaging infighting over how best to manage migrant arrivals, the EU's 28 leaders had been keen to show there is still life in the European project with quick decisions on a series of top-notch nominations for what are key portfolios.

But their failure, yet again, to agree on any names highlights Europe's changed political landscape following May's elections to the European Parliament, which saw the two historically dominant center-right and -left groups lose seats to the far-right and populists, as well as to pro-business and pro-environment parties.

Rather than make Europe more efficient, the results seem to have complicated matters further.

"It will continue," Italian Prime Minister Giuseppe Conte told reporters after the summit broke off, and leaders left, many without saying much to reporters.

"It's a bit complicated," he said, after more than 17 hours of official deliberations, plus hours of sideline meetings.

No news conference are planned to explain exactly how the summit had broken down.

The European Central Bank chairman's job was to be decided later.

After a night of talks that started Sunday afternoon, it had all appeared on track by mid-morning Monday. As some reporters slumped asleep over their desks, a high-ranking diplomat involved in the deliberations said that former Dutch foreign minister Frans Timmermans was favorite to become the next president of the European Commission, which proposes and enforces EU laws, with policy commissioners who supervise policy on everything from national budgets to migration, from competition issues to health.

The diplomat spoke on condition of anonymity because the leaders hadn't reconvened for formal talks where they were expected to confirm the jobs.

Over what has been one of the longest summits in recent years — surpassing even the record set during the Greek debt crisis — Bulgaria's Kristalina Georgieva from the center-right European People's Party group looked likely to follow Donald Tusk as head of the European Council, which coordinates policies of member states and organizes summits.

An EU official later said that Georgieva was part of the reason for the holdup, and it remained unclear whether she would get a greenlight. The official asked not to be identified because of the sensitivity of the talks.

Others in line for top jobs were pro-business liberals Belgian Prime Minister Charles Michel or the current EU competition commissioner Margrethe Vestager from Denmark as foreign policy chief — essentially the bloc's top diplomat. The leading EPP candidate Manfred Weber appeared in line to serve at least half a term as president of the European Parliament, the diplomat said.

The aim is to fill the posts respecting political affiliations, geography — a balance of countries from Europe's north and south, east and west — population size and gender considerations. But the wrangling is yet another sign of the way that EU elections in May — which saw the two mainstream parties lose seats in the European Parliament — have shaken up Europe's political landscape.

As she left, German Chancellor Angela Merkel tried to play down the impasse, saying it's worth spending a little more time to achieve as broadly accepted an agreement as possible.

Merkel said the leaders put off their quest to fill the top posts because there were "big member states that couldn't live ... with the proposals we had today." She didn't offer details.

She suggested that, while it would be technically possible to outvote countries with a total of 100 million inhabitants, it would be unwise. Merkel said that "politics is attempting to implement what is possible, and sometimes that takes time."

"If we rushed things now ... and then lived with insurmountable tensions in the European Council for five years, we would be asked: 'Why couldn't you take one more day, and sleep on it for one night, and look again to see whether there is a new point of view?'"