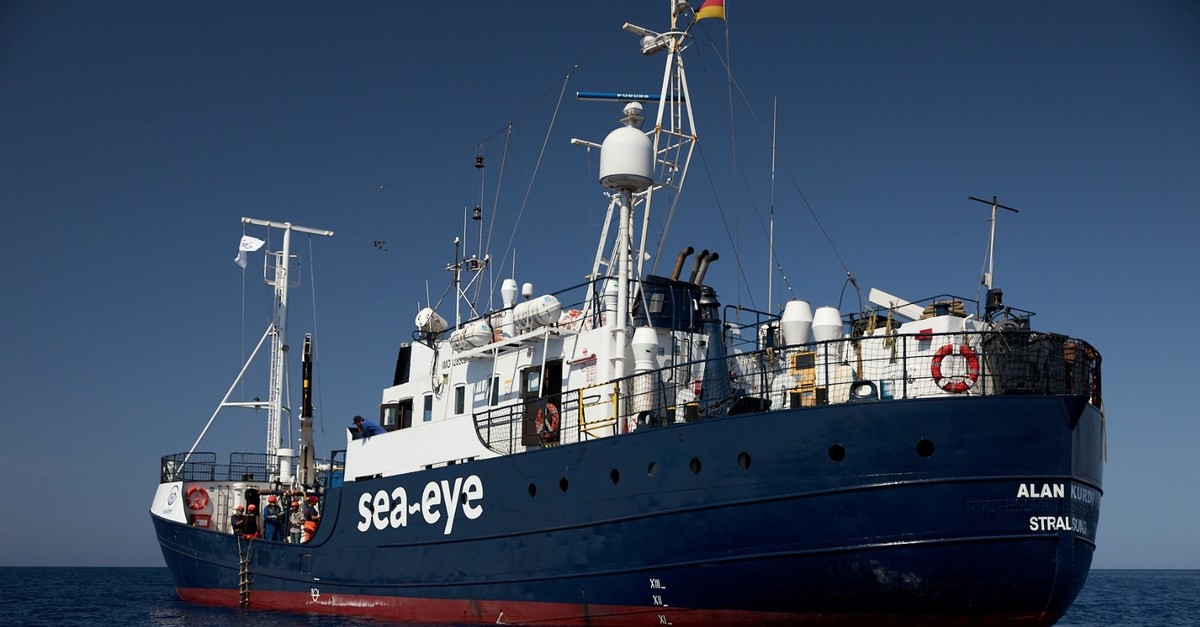 Migrant rescue boats have defied Italy and Malta's attempts to block Italian ports to rescue ships to save dozens of migrants who in search of a better future by trying to reach European shores.

Migrant rescue ship Alan Kurdi, operated by the nongovernmental organization (NGO) Sea-Eye, headed to Malta yesterday with 65 migrants on board, after waiting near the Italian island of Lampedusa. However, Maltese authorities barred the vessel from docking on the island, the Armed Forces of Malta said yesterday. "They have no permit to enter Maltese territorial waters," an army spokesman told German media service dpa.

The Alan Kurdi, named after a 3-year-old Syrian refugee who drowned off the Turkish coast in September 2015, attempted to dock on the Italian island of Lampedusa but it was prevented from doing so by Italy's hard-line Interior Minister Matteo Salvini. "The Guardia di Finanza came by in person to deliver Salvini's decree: The port is closed," the NGO said. In a tweet, Sea-Eye said: "In the evening, the Alan Kurdi changed its course towards Malta. We cannot wait until the state of emergency prevails. Now it has to be proven whether the European governments stand by Italy's attitude. Human lives are not a bargaining chip."

Another humanitarian vessel, Italian-flagged Alex, docked on the island of Lampedusa yesterday morning with some 41 people on board, defying efforts to stop them by far-right Salvini. The boat's captain Tommaso Stella was investigated for allegedly aiding illegal immigration, according to the Italian news agency Agi. It is the second vessel in just over a week to defy Italy's attempts to block Italian ports to rescue ships, as tensions increase over the international response to the migration crisis. Authorities on Lampedusa in late June seized a rescue ship belonging to German aid group Sea-Watch, which had forced its way into port with dozens of rescued migrants on board, and arrested its captain Carola Rackete.

Both Italy and Malta have impeded aid groups from operating rescue boats, either by refusing them entry to their ports or by impounding their vessels and putting their crews under investigation. Italy's migration policy is deepening rifts in Europe as NGOs clash with Italian authorities over rules that effectively close off the country's ports to their boats. Italy's coalition government, which includes the right-wing League, blames European partners for leaving it alone to deal with sea arrivals. New rules were adopted last month threatening NGO ships entering Italian waters without permission with a fine of up to 50,000 euros and the impounding of their vessels. After the Alex reached port, the populist deputy prime minister said that he would raise the maximum fine to 1 million euros ($1.12 million). German Interior Minister Horst Seehofer on Saturday asked his Italian counterpart, Salvini, to rethink the ports shutdown.

The Mediterranean Sea continues to be a deadly route as six people had died every day while attempting to reach European shores in 2018. In its report titled "Desperate Journeys," the U.N. refugee agency said, "An estimated 2,275 people died or went missing crossing the Mediterranean in 2018, despite a major drop in the number of arrivals reaching European shores." The death rate among migrants crossing the sea from Libya to Italy or Malta more than doubled last year as naval search and rescue missions were reduced. Since June 2018, when Italy's populist government took office and started turning away nongovernmental organization rescue ships, migrants saved at sea have repeatedly been trapped in intra-EU rows about where they should be allowed to land.