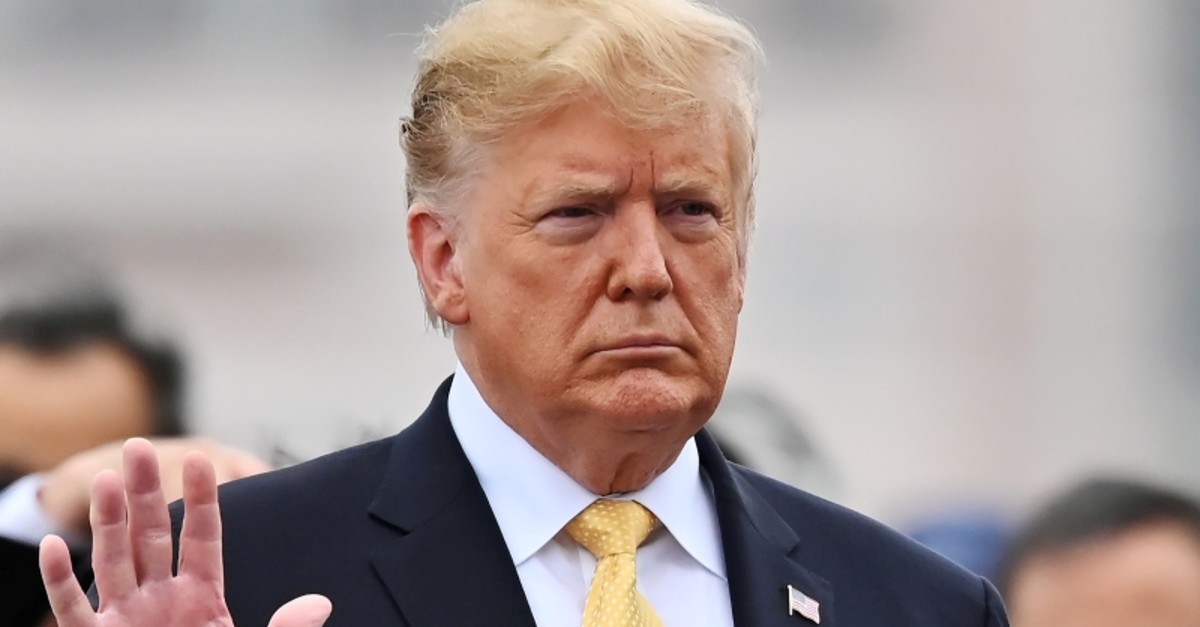 The U.S. leader tweeted about Ambassador Kim Darroch a day after a British newspaper published the diplomat's unflattering assessments of the current administration in Washington.

"I do not know the Ambassador, but he is not liked or well thought of within the U.S. We will no longer deal with him," Trump wrote.

Hours after the tweet, a spokesman for British Prime Minister Theresa May's government reiterated the country's "full support" for its ambassador to Washington.

"Sir Kim Darroch continues to have the prime minister's full support," a spokesman said, after the row broke out over the leak of diplomatic cables.

"We have made clear to the U.S. how unfortunate this leak is. The selective extracts leaked do not reflect the closeness of, and the esteem in which we hold, the relationship," the spokesman said in response to the tweets.

"At the same time we have also underlined the importance of ambassadors being able to provide honest, unvarnished assessments of the politics in their country."

He added: "The U.K. has a special and enduring relationship with the US based on our long history and commitment to shared values and that will continue to be the case."

The documents — published in the Mail on Sunday newspaper — have created awkwardness between two countries that are longtime allies. British officials said they were hunting for the culprit behind the leak, which was both an embarrassment to Prime Minister Theresa May's government and a major breach of diplomatic security.

Darroch has served as Britain's envoy to Washington since 2016, and the cables cover a period from 2017 to recent weeks.

In the leaked documents he called the Trump administration's policy toward Iran "incoherent," said the president might be indebted to "dodgy Russians" and raised doubts about whether the White House "will ever look competent."

The documents were intended for senior U.K. ministers and civil servants. Government officials think the mole will be found among British politicians or officials, not foreign governments or hackers.

Some U.K. diplomatic cables go to more than 100 recipients, though more sensitive messages have a smaller distribution list.

The inquiry is being led by civil servants in the Cabinet Office, and Slack said police would only be called in "if evidence of criminality is found."

But Conservative U.K. lawmaker Tom Tugendhat, who chairs Parliament's foreign affairs committee, said he had written to the chief of London's Metropolitan Police asking for a criminal investigation into the leak.

It's possible the leaker could be charged with breaching the Official Secrets Act, which bars public servants from making "damaging" disclosures of classified material. Breaching the act carries a maximum sentence of two years in prison, though prosecutions are rare.

Foreign Secretary Jeremy Hunt said there would be "very serious consequences" if the culprit was caught.

He said the ability to communicate frankly was "fundamental" to diplomacy.

Amid the trans-Atlantic strain, Trump on Monday renewed his criticism of the outgoing prime minister's handling of Britain's stalled departure from the European Union.

"I have been very critical about the way the U.K. and Prime Minister Theresa May handled Brexit," he tweeted. "What a mess she and her representatives have created. I told her how it should be done, but she decided to go another way."

He added: "The good news for the wonderful United Kingdom is that they will soon have a new Prime Minister."

May is set to step down later this month, replaced either by Hunt or by his predecessor as foreign secretary, former London mayor Boris Johnson. Trump has previously praised both men.

Slack said May had "full faith" in Darroch, a long-serving diplomat, though didn't agree with the ambassador's characterization of the Trump administration.

He said ambassadors were hired to provide "honest, unvarnished assessments" of politics in the countries where they served, which didn't necessarily reflect the views of the British government.

But Trump's tweets increased the pressure on Britain's government over Darroch, who also has been accused by some Brexit-backing U.K. politicians of having a lack of enthusiasm for Britain's departure from the EU.

The journalist who reported the leak, Isabel Oakeshott, is a strong supporter of Brexit and an ally of Brexit Party leader Nigel Farage, who also is Britain's leading champion of Trump.

Trump said in 2016 that Farage would "do a great job" as an ambassador to Washington.

Farage brushed off that idea Monday, saying "I'm not a diplomat, and I think that's quite an understatement."

Robin Renwick, who served as Britain's ambassador to Washington in the 1990s, said Darroch had done nothing wrong but the leaked cables had made his position "untenable."

"There will of course be a decent interval. He will then have to be moved on," Renwick told the BBC.

"I think it is unconscionable that any professional person in either politics of the civil service can behave in this way," he said.

Fox, who was meeting Trump's daughter Ivanka in Washington on Monday, told the BBC he would apologize for the fact that standards of "either our civil service or elements of our political class" had "lapsed in a most extraordinary and unacceptable way."