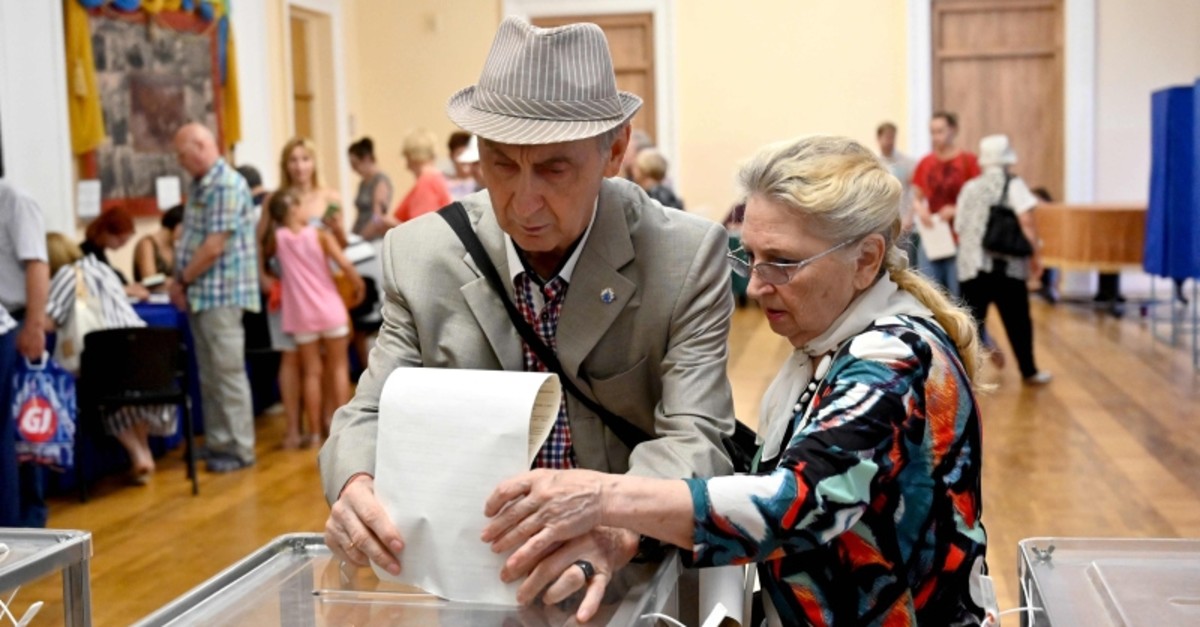 An elderly couple cast their ballot papers at a polling station during Ukraine's parliamentary election, in Kiev, on July 21, 2019. (AFP Photo)
by Compiled from Wire Services Jul 21, 2019 11:19 am

Ukrainians gave their comedian-turned-president Volodymyr Zelensky a mandate to reboot the country's politics on Sunday by handing his party a record score in parliamentary elections, exit polls showed.

Zelensky's Servant of the People party -- named after the sitcom he starred in before his shock presidential win in April -- took 43.9% of the vote in Sunday's election, according to combined figures from three pollsters.

It was the highest score in a parliamentary election for any party since Ukraine gained its independence with the 1991 collapse of the Soviet Union.

Overall, five parties cleared the 5% threshold necessary to get party-list seats, according to the poll. In all, the parties got less than 80% of the overall vote, suggesting that Zelenskiy's party was likely to win a majority of the party-list seats.

The exit polls only showed results for the half of seats assigned by party lists. The rest, in which members are directly elected in their districts, will be crucial in determining how Zelensky will try to form a government.

The outgoing parliament, dominated by Zelensky's predecessor Petro Poroshenko, has been hostile to the actor, who called a snap election during his swearing-in as president.

"He was elected but he can't do anything. They (lawmakers) constantly put sticks in his wheels and dump his ideas," Valentyna, an 82-year-old pensioner who voted for Zelensky's party early in central Kiev, told AFP.

Zelensky's rise has been viewed as a rejection of Ukraine's political elite for failing to improve living standards, root out corruption and end the conflict with Russian-backed separatists that began in 2014 after a popular uprising ousted a pro-Moscow president.

The Ukrainian president must share power with parliament, which will nominate a prime minister and form a government.

Servant of the People may fall short of a majority and may need to form a coalition.

The ballot is expected to dramatically transform the makeup of the legislature, with analysts predicting that between 50 and 70 percent of the next parliament will be first-time MPs.

Out of the five parties leading in opinion polls, two are newly created -- Zelensky's own party and Golos (Voice), led by rock star Svyatoslav Vakarchuk.

Packed with young people new to politics, the two parties have gone as far as banning any candidates who previously served as MPs from their lists.

Their candidates include businesspeople, athletes, and activists. Their average age is 37.

Kateryna, a 31-year-old Kiev woman on maternity leave, said she cast her vote for the singer because she "believes in his young intelligent team."

"It is the first time I am voting for someone because I like them, not because I have to choose the lesser evil," she told AFP.

The 41-year-old Zelensky, who shocked Ukraine in April by becoming the country's youngest ever post-Soviet leader, also invited ordinary Ukrainians to run for his party.

On the last day of campaigning on Friday, Vakarchuk and his popular band Okean Elzy gave a free concert in Kiev to a chanting, mostly young, crowd.

Golos is likely to enter parliament, with polls showing support of between four and seven percent.

In a boon for the Kremlin, a pro-Moscow party called Opposition Platform-For Life is the second most popular in opinion polls, with up to 13 percent of voter support.

The party's top candidate Viktor Medvedchuk, who has said Russian President Vladimir Putin is his daughter's godfather, is expected to return to parliament after a long absence.

A total of 225 of parliament's 424 members are elected through party lists, while the rest are selected directly in single-member districts.