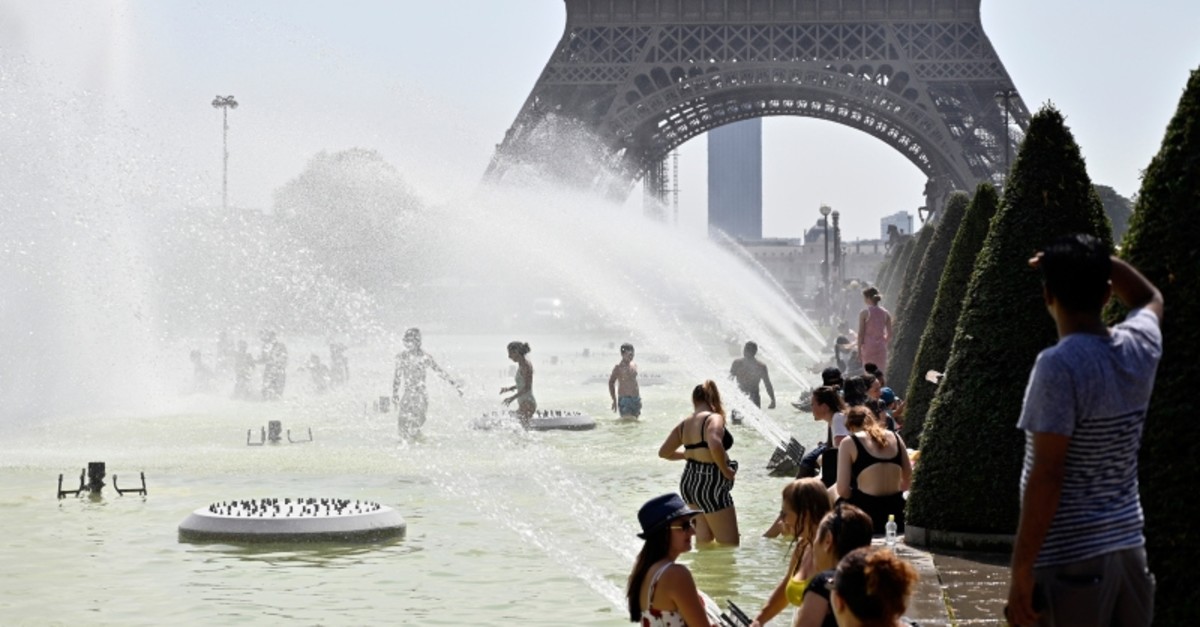 People cool off and sunbathe at the Trocadero Fountains in Paris, on July 25, 2019 as a new heatwave hits the French capital. (AA Photo)
by Compiled from Wire Services Jul 25, 2019 6:06 pm

Record temperatures are being set across Europe, including Germany, France and the Netherlands, as the continent swelters Thursday in what is its second heat wave this summer.

Climate scientists warn this could become the new normal in many parts of the world. But temperate Europe — where air conditioning is rare — isn't equipped for the temperatures frying the region this week.

So tourists frolicked in fountains to seek relief, and authorities and volunteers fanned out to help the elderly, sick and homeless hit hardest by the heat. Trains were canceled in Britain and France, and French authorities urged travelers to stay home.

One by one, heat records are being broken across Europe. On Thursday afternoon the Paris area hit 42.4 degrees Celsius (108.3 degrees Fahrenheit), beating the previous record of 40.4 C (104.8 F) set in 1947. Authorities said the temperature was still rising, as a result of hot, dry air coming from northern Africa that's trapped between cold stormy systems.

The Netherlands and Belgium also reported new record heats and Britain is expected to do so later.

The Netherlands' meteorological institute said 40.4 C (104.72 F) was recorded Thursday in the municipality of Gilze Rijen, near the border with Belgium. That just eclipsed the 39.3 C (102.74 F) recorded a day earlier in the southern city of Eindhoven.

"This is the highest recorded temperature for Belgium in history since the beginning of the measurements in 1833," said Alex Dewalque from the Royal Meteorological Institute of Belgium.

Britain also expects to breach the 39 C (102 F) mark for the first time after London recording its hottest day on record for July, with the mercury climbing to 36.9 C (98 F) at Heathrow Airport.

And swaths of Germany, the Netherlands, Luxembourg and Switzerland could face temperatures exceeding 40 C (104 F).

In Austria, a 2-year-old died of dehydration in the country's Styria region after he climbed into an overheated parked car without his family noticing and fell asleep in it.

The Austrian news agency APA reported Thursday that the boy, who climbed into a car parked at the family's farm on Monday, died at a children's hospital on Wednesday.

In the Netherlands, a government health institute warned of high levels of smog due to ozone in the air in parts of the country.

The National Institute for Public Health and the Environment issued a "smog alarm" Thursday for regions including the densely populated cities of Amsterdam, Rotterdam and The Hague.

The institute said air quality in the some regions will be "extremely bad" because light winds mean that pollution is not being blown away and sunlight transforms it into ozone. The smog can cause irritation of the eyes, nose and throat, and leave people coughing and short of breath.

Across Germany, Switzerland and Austria, some communities painted rail tracks in white hoping the light color would bring down the temperature by a few degrees. In Heiligendamm on the Baltic Sea in eastern Germany, train services were canceled temporarily during last month's heat wave after the tracks were deformed by the heat.

German railways Deutsche Bahn said passengers who had booked tickets for Thursday or Friday and wanted to delay their trips because of the heat could do so until August 4 without extra charge.

Across London and Paris, authorities and charity workers handed out water and sunscreen to homeless people and opened day centers for them to rest and shower.

"They are in the street all day, under the sun. No air conditioning, no way to protect oneself from the heat, so for some it's really quite complicated," said Ruggero Gatti, an IT worker joining other Red Cross volunteers handing out water bottles, soup and yogurt to the homeless in the Paris suburb of Boulogne.

In Cologne in western Germany, volunteers offered free water to thirsty passersby at the initiative of the city's local transportation system and an energy supplier, while others were sunbathing on the dried-up banks of the Rhine river.

Tourists clustered around fountains and canals. "It's too hot. In Brazil, where I live, we have the beach but here, since there is no beach, we can enjoy this fountain," said Ederson Lista-Vajes, a Brazilian tourist playing with spurts of water at Trocadero plaza across from the Eiffel Tower in Paris.

Since then the government has introduced a color-coded heat alert system to warn people when temperatures are expected to rise to dangerous levels in their area and trigger government assistance efforts.

The alert system went to its maximum level of red for the first time during last month's heat wave , when France saw its highest-ever recorded temperature of 46 degrees. On Thursday, about one-fifth of French territory was under a red alert, stretching from the English Channel through the Paris region and down to Burgundy.

Summers are usually mild in much of Europe and few homes have air conditioning. It's not that common in hospitals, stores or restaurants either.

Electric fans are selling fast around Paris — and traditional folding fans seem to be making a comeback, waved by many on the stuffy subway.

In Bavaria's prisons, inmates were getting cold cucumber soup, fruit and yoghurt for lunch and more water than normal, the German news agency dpa reported.

The heat wave is intense but expected to be short, with temperatures dropping Friday and Saturday.

As emissions continue to warm the planet, scientists say there will be more and hotter heat waves, like those increasingly hitting the U.S. though it's too early to know whether this hot spell is linked to man-made climate change.

"There is likely the DNA of climate change in the record-breaking heat that Europe and other parts of the world are experiencing. And it is unfortunately going to continue to worsen," said Marshall Shepherd, professor of meteorology at University of Georgia.