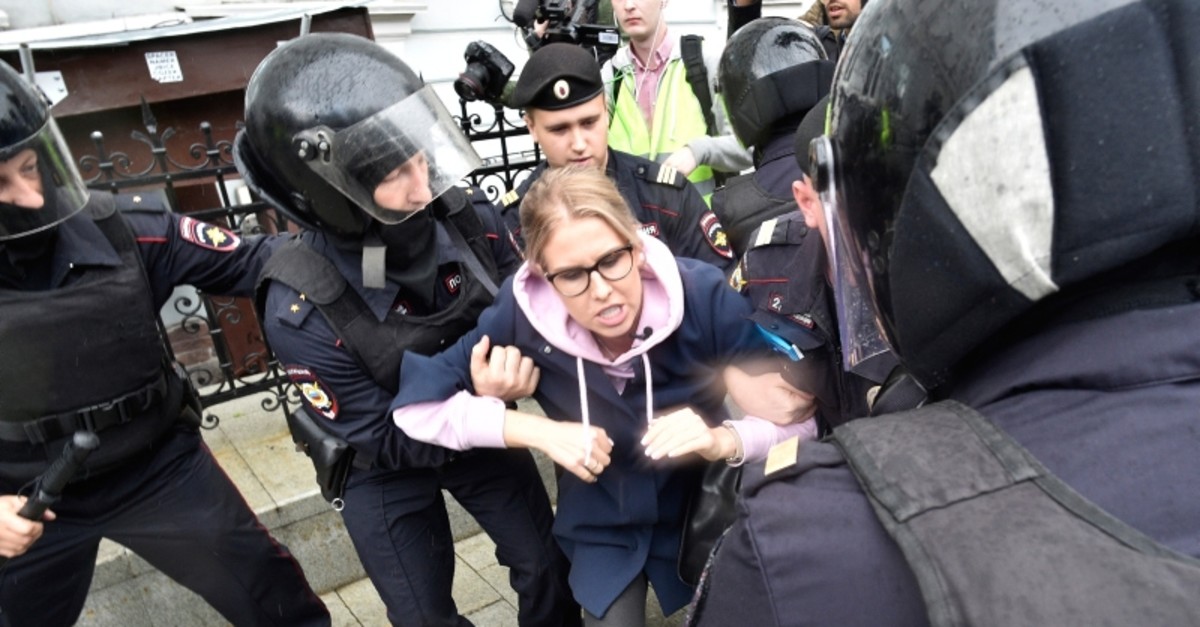 Police officers detain an opposition candidate and lawyer at the Foundation for Fighting Corruption Lyubov Sobol in the center of Moscow, Russia, Saturday, Aug. 3, 2019. (AP Photo)
by Compiled from Wire Services Aug 03, 2019 5:50 pm

Protesters once again took to the streets of Moscow Saturday, decrying the exclusion of some independent and opposition candidates for upcoming city council election that has shaken up Russia's political scene.

Lyubov Sobol, one of the excluded candidates and a driving figure of the current wave of protests, was among those detained. She was grabbed by police in central Moscow and hustled into a police van, loudly demanding to know why she was being held.

Sobol is currently three weeks into a hunger strike after being barred from taking part in the local polls and an ally of key opposition leader Alexei Navalny.

Demonstrators were aiming to hold a march along the Boulevard Ring, which skirts central Moscow and is a popular locale for people to walk around, despite repeated warnings that police would take active measures against a protest.

Many opposition leaders who attempted to run in the polls next month argue that the authorities have arbitrarily declared signatures they gathered to qualify invalid.

Helmeted riot police lined the route and started seizing demonstrators from a scattered crowd on Pushkin Square and pushing them back from another square further along the route.

Some of the detentions were harsh, including one young bicyclist who was beaten with truncheons as he lay on the pavement still straddling his bike. Some other detainees appeared nonchalant, smirking or checking their phones as police led them to buses.

The OVD-Info group, which monitors arrests, said at least 600 people had been detained.

Once a local, low-key affair, the September vote for Moscow's city council is now emblematic of the division within Russian politics and the Kremlin's ongoing struggles with how to deal with strongly opposing views in its sprawling capital of 12.6 million people.

In the past month, the issue has provoked a surprisingly large outcry for a local election. On July 20, about 20,000 people turned out for a demonstration that was the largest in the city in several years.

On Saturday, about 2,000 people attended another rally in St. Petersburg supporting the Moscow protests, the local news site Fontanka.ru reported.

The Moscow city council, which has 45 seats, is responsible for a large municipal budget and is now controlled by the pro-Kremlin United Russia party. All of its seats, which have a five-year-term, are up for grabs in the Sept. 8 vote.

The body decides the city's multi-billion-dollar budget but lacks political independence from mayor Sergei Sobyanin, an ally of Putin. Sobyanin has warned the opposition against "new provocations."

Also Saturday, Russia's Investigative Committee announced it was opening a criminal case against the Foundation for Fighting Corruption (FBK), headed by the Kremlin's most prominent foe Navalny, for allegedly "laundering" a billion rubles ($15.3 million).

Navalny is serving 30 days in jail for calling last week's protest. The head of the foundation also is jail in connection with that protest. Navalny and other protest leaders argue corruption is rife in the capital. The FBK this week published a new investigation into Sobyanin's deputy, accusing her of selling prime Moscow property to family members at rock-bottom prices.

Employees of the FBK "received a large sum of money from third parties which they knew was procured illegally," investigators said.

"Accomplices" of FBK "gave a legal appearance" to the funds by transferring them to bank accounts and ultimately to the accounts of the FBK, they said.

The popular FBK collects money through donations, and Navalny's ally Leonid Volkov dismissed allegations of money laundering as an attempt to stamp out Navalny's national network of volunteers.

Navalny was rushed to hospital last weekend in an incident his personal doctor blamed on possible poisoning with an unknown chemical substance.

A state toxicology lab said no traces were found.

Putin has yet to comment on the situation in Moscow.