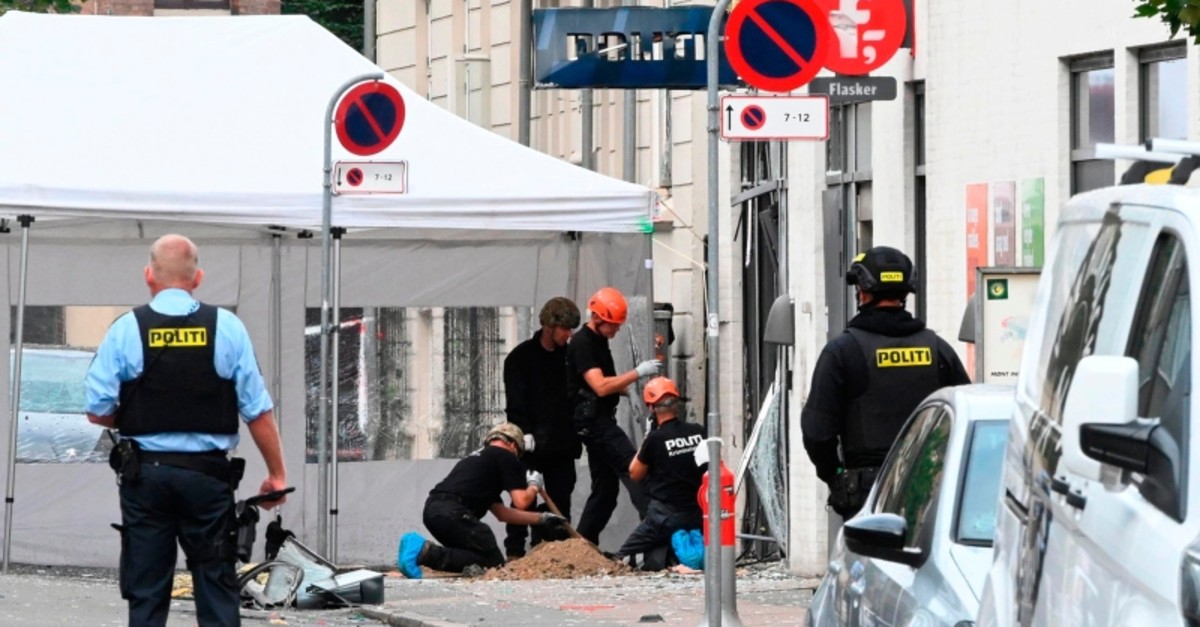 Danish police technicians work inspect the scene on Hermodsgade outside a local police station in Copenhagen on Aug. 10, 2019 (AFP Photo)
by Aug 10, 2019 8:14 pm

Danish police were probing an explosion that hit a police station in the capital Copenhagen early Saturday, shattering windows but causing no injuries.

The explosion damaged the entrance to the police station situated in the Copenhagen district of Norrebro.

"It was a deliberate act, no doubt about it," Chief Police Inspector Jorgen Bergen Skov told reporters.

No motive was known, he said, but added that nothing suggested it was an act of terrorism.

Prime Minister Mette Frederiksen later slammed the attack, calling it "completely unacceptable" and announcing that she would convene the government's security committee.

The committee comprises herself and the ministers for justice, defense, foreign affairs and finance.

It was the second blast in a week in the Danish capital, and the case was of "the highest priority for the police," she added.

Police have so far received more than 50 tips linked to the police station explosion, but welcomed more information, Skov said.

At a briefing, Skov mentioned four possible witnesses that were of special interest. They included the drivers of a car and a taxi that passed the police station shortly before the blast.

Police also posted several photos of a young man believed to be the assailant - aged 15 to 25 - and carrying a plastic bag where the explosive device was believed to have been contained.

They also listed the man's movements shortly before and after the blast that was reported to police at 3:18 am (0118 GMT).

Police said it was too early to conclude whether the two incidents were linked.

Late on Tuesday, an explosion shattered windows and damaged the facade of the Danish Tax Agency building in Copenhagen, in what police believe was a deliberate act.

Police said on Friday that industrial explosives were believed to have been used in the Tax Agency explosion, but Skov said police have not established if the same sort of explosives were used on Saturday.

The timing of the blast on Tuesday suggested that there was no intent to harm anybody, Skov said earlier this week.