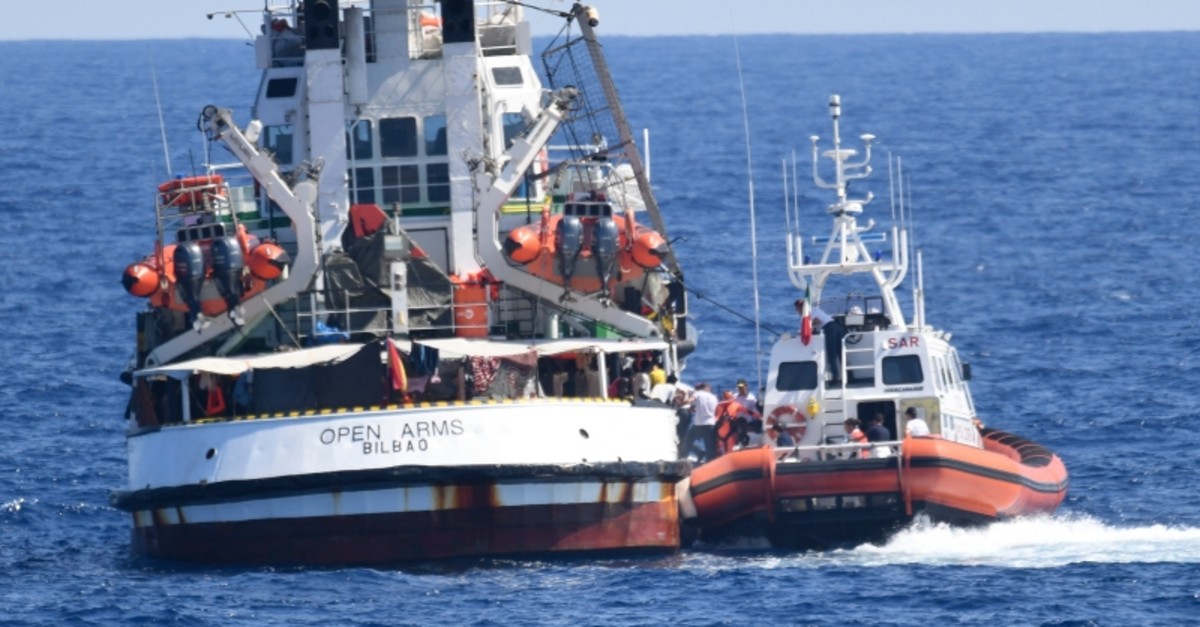 An Italian prosecutor on Tuesday ordered the more than 80 remaining migrants on the Open Arms charity vessel to disembark in Sicily after it was stuck for days off Lampedusa.

Luigi Patronaggio also ordered the vessel preventatively seized after inspecting the boat on which some of the migrants have spent 19 days and "given the difficult situation on board", a judicial source said.

The order to seize the Open Arms, anchored off Italy's southernmost island of Lampedusa, came after Patronaggio boarded the ship and met with port authorities as part of an investigation into possible kidnapping charges resulting from the refusal of hard-line Interior Minister Matteo Salvini to allow the migrants to get off the Spanish humanitarian ship, the news agency ANSA reported.

"Finally, the nightmare ends and 83 people on board will receive immediate assistance on land," Open Arms said on Twitter. It remained unclear when they would begin leaving the ship.

Salvini refused to open Italian ports, even after six countries stepped forward to take the migrants and despite a fissure in Italy's imploding governing coalition, that expanded in recent days to include his handling of the crisis.

Salvini, who staved off previous investigations resulting from other migrant standoffs when the Senate refused to lift his immunity, tweeted he wasn't worried about the prospect of criminal charges.

"I am not afraid, I am proud to defend the borders and security of my country," Salvini wrote.

Earlier Tuesday, Spain's caretaker Socialist government sent a navy ship to escort the Open Arms back to a Spanish port after at least 15 of the migrants jumped into the sea within view of Lampedusa, desperate to flee overcrowded and deteriorating conditions on the vessel 19 days after they were rescued off Libya. Those who jumped overboard were eventually picked up by Italian ships.

Until the action by the Italian prosecutor, the Spanish move was the first concrete signal promising an end the humanitarian crisis involving the Open Arms, even if it added at least a week to the ordeal for the remaining 83 migrants aboard.

"After analyzing all the options, this is the most adequate and the one that would allow resolving within this week the humanitarian emergency on board the Open Arms," the Spanish government said in a statement.

The migrants on the Open Arms were tantalizingly close to Lampedusa but forbidden by Salvini to disembark. The captain had previously told Italian authorities the crew of 17 was no longer able to maintain control, and they described the situation as "desperate."

After one Syrian national jumped and was rescued and brought to shore on Lampedusa, two more groups followed his lead. They were likewise ferried to land and spared a return to the ship, where officials say psychological and hygienic conditions have deteriorated markedly.

Video showed people in life vests floating in the sea, some in groups and some individually, with a coast guard vessel nearby and rubber dinghies maneuvering to pluck them to safety.

Dozens more have been evacuated in recent days for medical reasons or because they are minors. Officials said tensions on board were running high, with fights breaking out among the migrants.

The temporary confiscation of the rescue ship by the prosecutor "is a cost that Open Arms assumes to secure that the people on board can be assisted," said the Spanish NGO's founder, Oscar Camps, on Twitter.

"We consider indispensable prioritizing their health and security in this humanitarian emergency," he wrote.

Spain said it would take three days for its navy ship, the Audaz, to reach Lampedusa from the Spanish port of Rota, and it wasn't immediately clear how long it would take to escort the smaller rescue vessel to the Spanish island of Mallorca, where it is set to dock in Palma de Mallorca.

Emilio Damiá Marqués, the commander of the Audaz, told Spanish public broadcaster TVE from Rota that his ship, carrying 62 people including a doctor, expected to arrive at the Italian island by Friday afternoon.

"Good news, finally the by-now unsustainable situation on board the NGO ship could have a solution that protects the people on board for 19 days by now, and not leave Italy alone," he said.

The Open Arms sailed within a few hundred meters of Lampedusa last week after Salvini's ban on private rescue boats entering Italy's waters was overturned by a court. Salvini has appealed the ruling and warned that his ban on docking still held.

Meanwhile, the Norwegian-flagged Ocean Viking, which is operated by two French humanitarian groups and has 356 rescued migrants aboard, has been sailing between Malta and the Italian island of Linosa as it waits for a port of safety to be assigned.

Italy's standoff over the Open Arms has further raised tensions in the country's failing ruling coalition, as Cabinet members from the 5-Star Movement, including the defense and transport ministers, increasingly question the actions over the migrants by Salvini, leader of the right-wing League party.

Toninelli said other European countries were turning their backs on Italy "and there is one person responsible: Matteo Salvini, who has weakened the government and as a consequence our position in Europe."