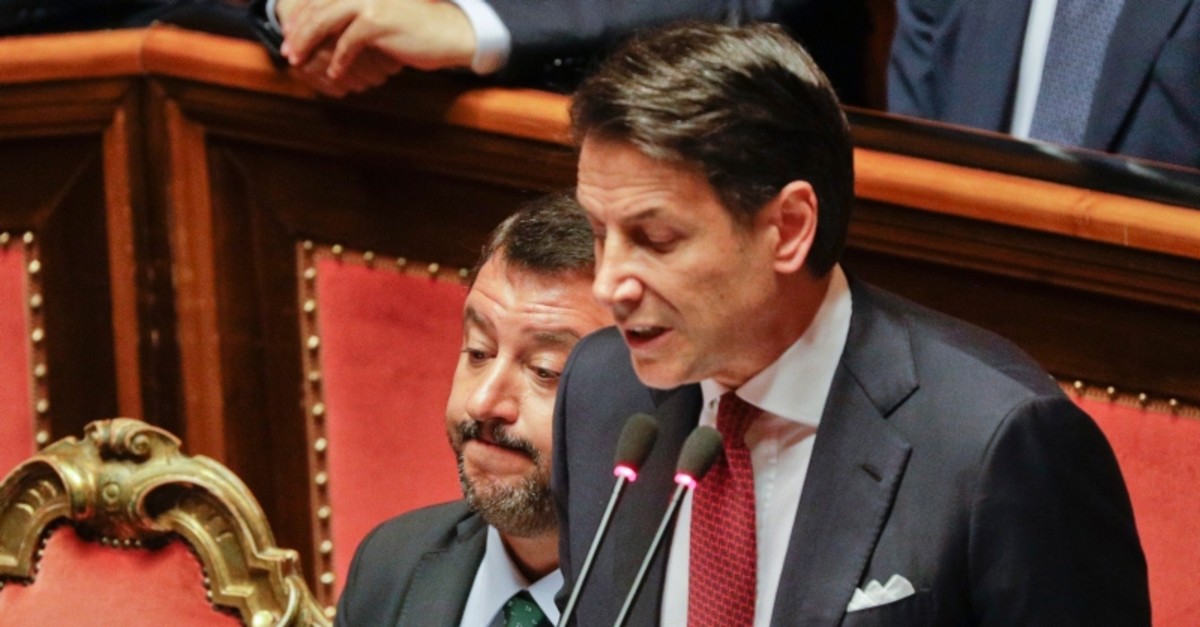 Italy's far-right Interior Minister Matteo Salvini was "irresponsible" to spark a political crisis by pulling the plug on the governing coalition, Prime Minister Giuseppe Conte told the Senate on Tuesday.

Addressing parliament after it was recalled from its summer recess to decide the future of the barely year-old government, Conte announced his resignation after months of infighting and gridlock, paving the way for unpredictable political outcomes.

"It is irresponsible to initiate a government crisis," Conte said after Salvini began his efforts to bring down the government, an alliance between the anti-migrant League and the anti-establishment Five Star Movement (M5S), in the hope of snap elections

"(Salvini) has shown that he is following his own interests and those of his party," Conte told a packed Senate, with a stony-faced Salvini sitting by his side at times shaking his head, rolling his eyes or nodding to League senators as the prime minister unleashed a blistering critique of his actions over the past two weeks. "His decisions pose serious risks for this country."

Salvini "violated the solemn promise he took when the government began that if there were differences they should be discussed in good faith and with loyal collaboration," Conte said as League Senators booed and hissed.

"Making citizens vote is the essence of democracy, asking them to vote every year is irresponsible," Conte added.

"I heard you calling for 'full powers' and invoke (demonstrations in) the piazzas to support you, which worries me," Conte said.

Conte said he will submit his resignation to President Sergio Mattarella at the end of the Senate debate.

On the other side of Conte sat Luigi Di Maio, whose M5S was branded as obstructionists by Salvini over the past 12 days, since he pulled the plug on their alliance.

Salvini has demanded early elections, three-and-a-half years ahead of schedule, confident his surging popularity will sweep him into power as prime minister and push the anti-establishment 5-Star into opposition.

After Conte announced his intention to resign, Salvini hit back saying: "Thank you, finally, I would do it all again."

Mattarella, as head of state, could ask Conte to stay on and try to find an alternative majority in Parliament, or accept his resignation and see if some other leader can forge an alternative coalition. Failing that, Mattarella could dissolve Parliament, setting the stage for a new general election as early as October.

The political crisis has raised concerns about the Italian economy, whose debt ratio at 132% of gross domestic product is the second-biggest in the eurozone after Greece. Since the unwieldy government was formed in June 2018, uncertainty under the coalition has cost the country an extra five billion euros ($5.54 billion) in interest on its debt, the Il Sole 24 Ore financial newspaper reported.

According to opinion polls, the League could form a coalition with the anti-immigration, anti-LGBT party, Brothers of Italy, and possibly Silvio Berlusconi's center-right Forza Italia. But a bid by his rivals to put aside their differences and forge an alliance could derail Salvini's plan, with a coalition between M5S and the opposition center-left Democratic Party (PD) being discussed. While there is bad blood between the two parties, M5S is languishing in the polls and wants to avoid an early election. A PD-M5S coalition could lead to the opposite of what Salvini intended, with him out of government altogether instead of being its sole leader.