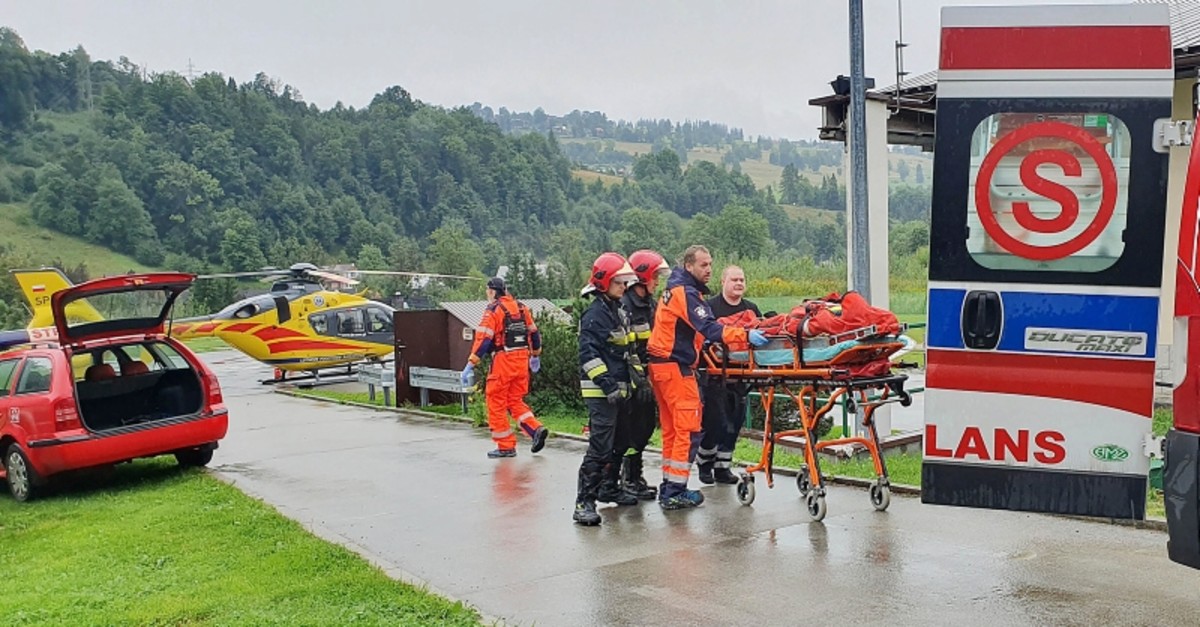 Rescue helicopter and ambulance have brought to hospital the first people injured by a lighting strike that struck in Poland's southern Tatra Mountains during a sudden thunderstorm, in Zakopane, Poland, on Thursday, Aug. 22, 2019. (AP Photo)
by Associated Press Aug 22, 2019 5:46 pm

Witnesses said the thunderstorm came suddenly on a day that began with clear weather.

Four people were killed on the Polish side and one in Slovakia.

Some of the injured were brought by helicopter to the hospital in the Polish mountain resort town of Zakopane while others were taken elsewhere, a spokeswoman for the Polish air ambulance service, Kinga Czerwinska, told the news broadcaster TVN24.

The lightning hit the Giewont peak, a trekking destination popular among Polish and foreign tourists that is 1,894 meters (6,214 feet) high, and in other locations across the Tatras.

The Tatras, part of the Carpathian mountain range, are the highest mountains in Poland and in Slovakia and attract tourists from near and far with their soaring peaks and scenic lakes.

Krakow province governor, Piotr Cwik, told reporters that two children were among the dead. The number of those hurt could still rise, as people were still being brought from various places in the mountains, Cwik said.

Slovak rescue service said that a Czech tourist fell down hundreds of meters (yards) and was killed after lightning knocked him off the Banikov peak.

Rescuers with the Polish Tatra emergency service, known as TOPR, were dispatched to the Giewont peak in the early afternoon after being notified that a group of people, including children, had been struck by lightning there. TOPR chief Jan Krzysztof said people were struck at other locations, too. TOPR said it believes the lightning probably hit metal chains installed on the peak to aid tourists in their climb.

Footage on TVN24 showed rescuers racing to a helicopter to get to the peak, in wet, rainy and foggy weather and then a helicopter landing at the hospital in Zakopane with those hurt.

Czerwinska said four helicopters were sent in to help, in addition to the TOPR helicopter.

Grzegorz Pyzel, a tourist, told TVN24 he was half way up the Giewont with his wife in clear weather when suddenly they heard thunder, thinking it was a jet overhead.

"But soon lightning struck and we turned back and suddenly it started pouring and you could hear thunder roaring from every possible direction," Pyzel said.

They reached a shelter on Hala Kondratowa, at the foot of the mountain and soon others started coming in, saying there were people hurt above, he said.

The tragedy hit the area as the TOPR rescuers have also been searching for two spelunkers who went missing in a cave on Saturday after being trapped by rising water.