35,000 people protest racism in Dresden ahead of polls 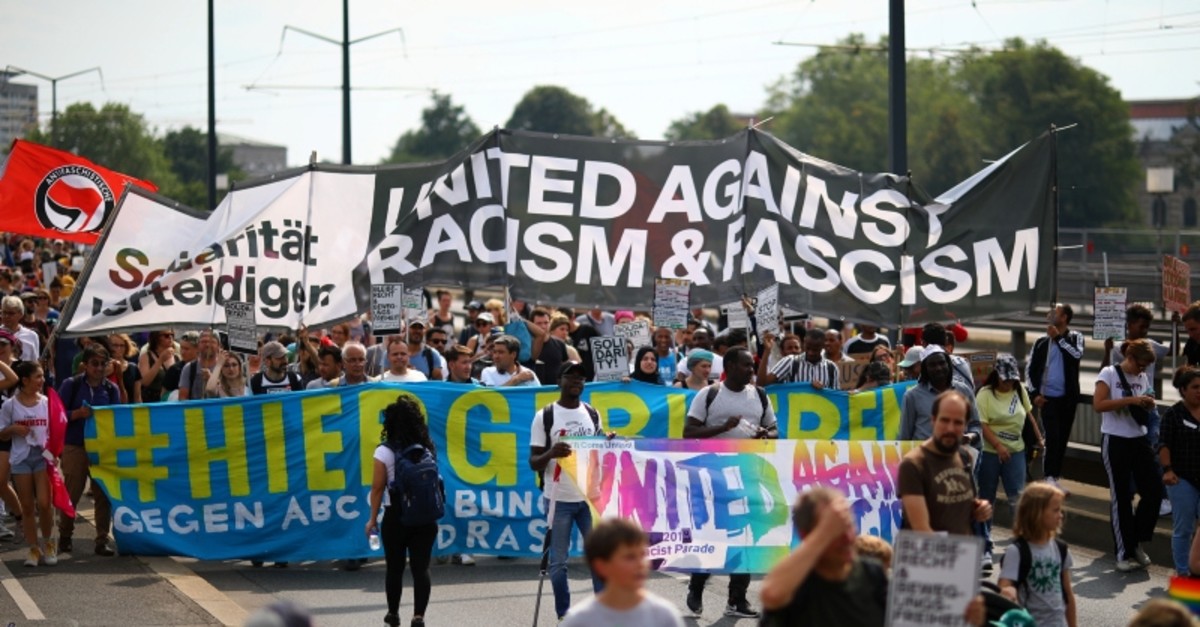 People attend a demonstration with the slogan ,#unteilbar, (indivisible) and protest against discrimination, racism, sexism and nationalism in Dresden, Germany, Aug. 24, 2019 (Reuters Photo)
by Aug 24, 2019 7:54 pm

Around 35,000 people marched against hate and racism in the eastern German of city Dresden on Saturday, organizers said, a week before state elections when far-right party AfD is projected to make huge gains.

Under the banner "indivisible", a broad coalition of artists, unionists and politicians gathered to urge voters to reject exclusion, which they argue is championed by right-wing extremists.

The three-hour march took place in a relaxed atmosphere under the warm summer sun in the picturesque baroque city, one of the most popular tourism destinations in the former communist east.

But Dresden is also the cradle of the Islamophobic movement Pegida, and the state of Saxony is a stronghold of the anti-immigration Alternative for Germany party.

Organizers had predicted around 10,000 people to turn up for the march, so 35,000 well exceeded their expectations.

Many at the protest held aloft signs that read: "No place for Nazis" and "Racism is not an alternative".

One of the marchers, 27-year-old Berlin teacher Janna Rakowski, said she wanted "to show the people of Dresden that they are not alone in the fight against racism.

"We want to show our solidarity in this particular situation before the elections in Saxony," she told AFP.

A spokeswoman for the organizers, Susann Riske, said: "We want to do something against the current political climate and support those who oppose hatred and violence every day."

Greta Schmidt, a 66-year-old retiree from Dresden, held up a sign reading "Grandmas against the extreme right".

"The people are very dissatisfied... the big parties have sabotaged their chances," she said.

Before the march started, organizers said they expected at least 10,000 people to turn up at the protest, while about 70 kilometers (40 miles) away, the co-leader of the AfD Alexander Gauland is due to address a rally in the city of Chemnitz.

An AfD candidate in the Saxony election, Nico Koehler, on Saturday denied his party is racist, calling such charges "propaganda designed to get left-wing parties into the state assembly".

He also called on other parties to enter into dialogue with the AfD.

"Democracy starts with interpersonal dialogue... even with those you consider the enemy," he said at a campaign stall in Chemnitz.

In the state of Brandenburg, the region surrounding Berlin, some surveys even see the AfD topping the polls, which would be a major blow for Merkel's junior coalition partners, the Social Democrats (SPD).

If a strong showing by the AfD is confirmed in both regional polls, it could throw Merkel's coalition into a new crisis by potentially heightening calls for the SPD to pull the plug on the partnership.

For the organizers of Saturday's march, the regional elections, together with October 27 polls in the state of Thuringia, will be the "moment of truth for democracy".

Under the banner #indivisible, the collective of activists managed to get a quarter of a million people on the streets in Berlin last October to defend inclusion and unity.

That march was organized with Germany still shocked by xenophobic attacks in a Saxony city, Chemnitz, in the aftermath of the stabbing of a German by a migrant.

AfD politicians then also joined in a silent march through Chemnitz alongside the head of Pegida, as well as neo-Nazis.

Since its entry into the Bundestag after the 2017 general election, the far-right AfD has shaken up German politics, including breaching taboos such as openly questioning Germany's atonement culture over World War II.

Its anti-immigrant and anti-Islam rhetoric has proved attractive to those resentful of Merkel's decision to let in more than a million asylum seekers since the 2015 refugee crisis.

The former communist east has been most receptive to the AfD, with part of the population feeling left behind economically as villages are depleted of younger inhabitants, many of whom have headed to western Germany for better-paying jobs or opportunities.