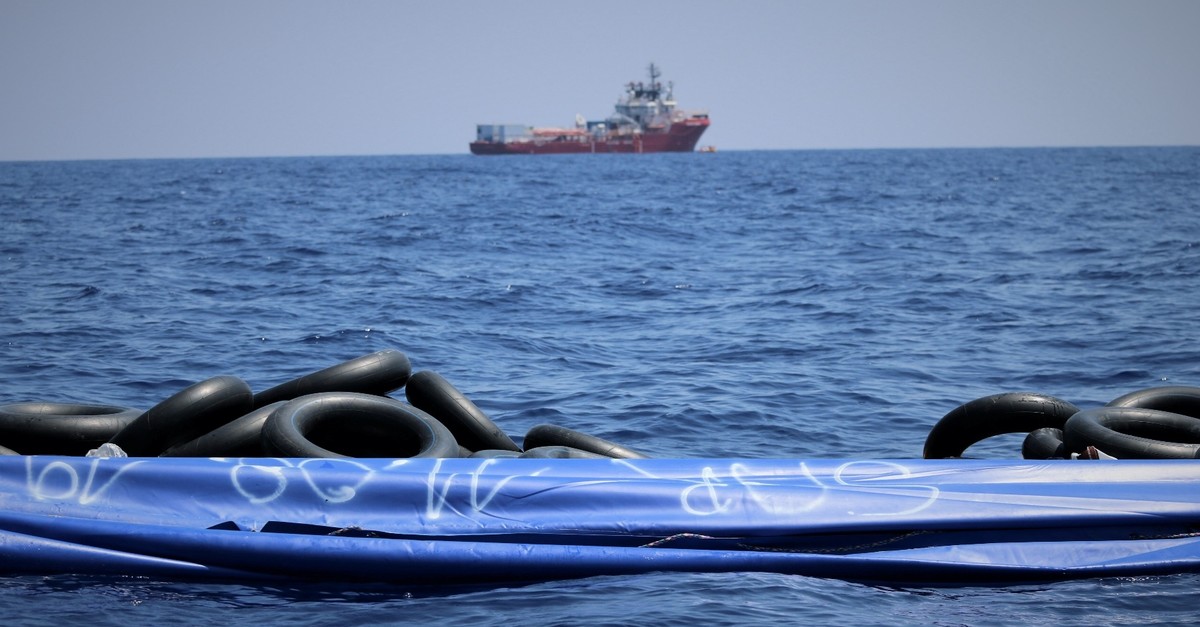 The migrant rescue ship Ocean Viking floats in the distance, as it waits in international waters between August 9 and 12, 2019.
by Daily Sabah with Agencies Aug 24, 2019 12:02 am

Migrants stranded on rescue ships at sea for weeks at a time, awaiting European countries to take action has entered the stage of normalization, especially in the Mediterranean Sea

A group of 356 people rescued in the Mediterranean off Libya have passed two weeks in a rescue ship at sea without being assigned to a safe port.

The situation was described as ''the new normal'' by one charity worker, as European countries fell short in coming up with a systematic response to the situation for two weeks. Six countries have finally accepted to welcome the refugees on Friday.

"It is a complete shame. It is inhumane," Jay Berger, project coordinator for Doctors Without Borders (MSF) on the ship, the Ocean Viking, said by satellite phone Thursday. "There needs to be concrete action. This is not how people should be treated."

The ship is running low on food and supplies, the MSF charity had announced on Thursday.

Malta's Prime Minister Joseph Muscat announced on Friday that six EU countries had agreed to take in the 356 migrants.

Maltese navy boats will transfer the migrants on the Ocean Viking to land and they will be relocated to other member states, Muscat tweeted, listing France, Germany, Ireland, Luxembourg, Portugal and Romania. "None will remain in Malta," he wrote.

The Ocean Viking rescue ship conducted four rescues off Libya from Aug. 9-12, and has spent two weeks without being permitted to disembark the rescued people in a safe harbor.

With a stated capacity of 200 passengers, the ship has been sailing between the Italian island of Linosa and Malta, staying out of sight of land in the hopes of preventing any excitement from the rescued people.

Berger said that the situation on board remained "manageable," but anxiety was growing about what is going to happen. Many passengers were becoming increasingly concerned that they would be taken back to Libya, where many suffered torture and detention, he said.

"The longer we are at sea, the harder it is for them to trust us," he added. "Already two weeks is way too long."

Unlike the Ocean Viking, the Open Arms had been permitted to enter Italian waters after an administrative court ruled that it could access the port. An appeal to that ruling filed by Italy's hard-line Interior Minister Matteo Salvini is still pending.

Dozens were evacuated for medical emergencies or because they were minors during the 20-day-long Open Arms standoff. After the vessel anchored within sight of Lampedusa, and 15 migrants jumped into the sea on Tuesday seeking to reach land on their own out of frustration, the situation spiraled out of control. That triggered a resolution as a prosecutor visited the ship and Spain dispatched a naval vessel to escort the Open Arms to Spain.

The Italian interior ministry said Thursday that of the 163 migrants that were on board the Open Arms, 110 will be moved to five EU countries: 40 to France, 40 to Germany, 15 to Spain, 10 to Portugal, and between three and five to Luxembourg.

Berger said the Ocean Viking, operated in coordination with SOS Méditerranée, is determined to abide by all laws, and does not intend to force its way "into any territorial waters in any state." That was the case with a German ship operated by Sea-Watch, which forced its way into Lampedusa after 17 days at sea with 40 migrants after declaring a state of emergency on board.

Berger emphasized that while the ship awaited port, there were no humanitarian rescue ships operating in the central Mediterranean Sea, where some 580 people are believed to have died this year, according to the International Organization for Migration (IOM).

While that number is lower than last year's death toll of 1,130 from January through August, the rate of deaths per estimated crossing is higher, according to the IOM. "If we are not out there saving lives, people will die at sea. This is turning the Mediterranean into a graveyard," he said. "It shows a lack of care, a lack of decency and a level of apathy projected from the EU member states."