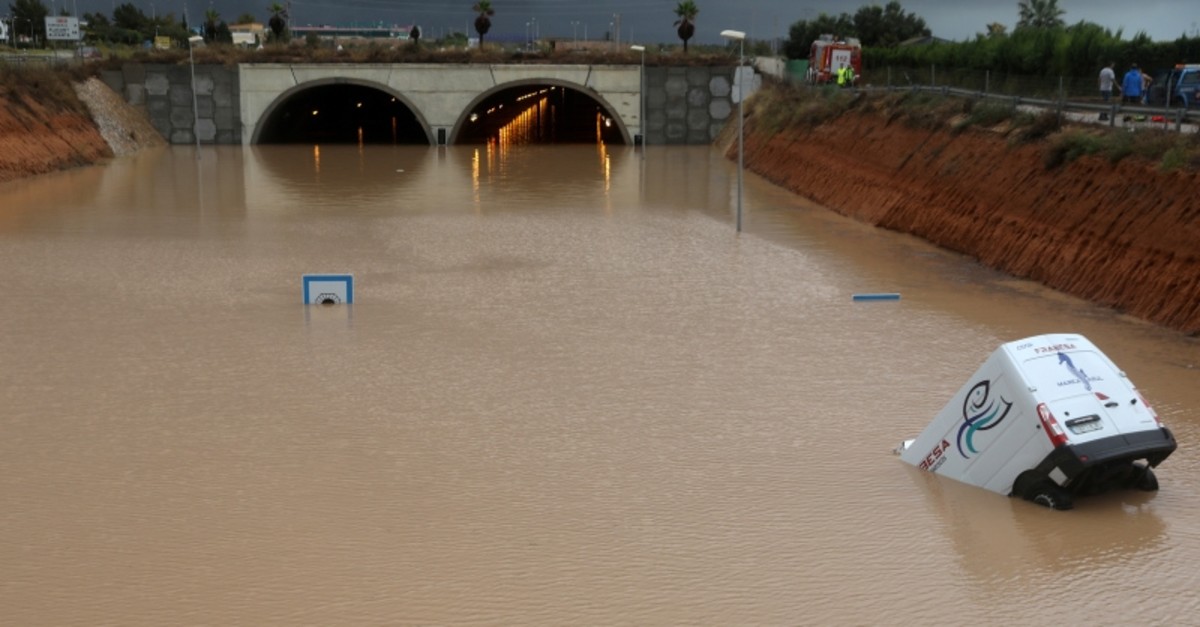 The town hall of the city of Almeria, on the Mediterranean coast, said a person was trapped in a car when it drove into a flooded tunnel on Friday morning. Spanish state broadcaster TVE reported that police were able to rescue two other people traveling in the car.

On Thursday, emergency services found a 51-year-old woman and her 61-year-old brother dead inside an overturned car that had been caught by the rising water in Caudete, a municipality around 100 kilometers (60 miles) southwest of the port city of Valencia.

Emergency services said about 60 people were rescued early on Friday from a campsite in the Cabo de Gata nature reserve on the coast of the province of Almeria.

Some municipalities in the regions of Valencia and Murcia have reported the heaviest rainfall on record.

In the town of Orihuela, about 200 kilometers (124 miles) south of Valencia city, the river Segura overflowed its banks at some points. The weather service for Valencia said that 12 centimeters (4.7 inches) of rain fell in six hours in Orihuela on Friday morning.

"The storms have picked up and we are still in a very difficult situation due to the overflowing of the river," Valencia's regional president Ximo Puig told TVE. "This will have important economic consequences, but right now the important thing is the wellbeing of our people."

The increased water levels of the Segura River also forced police to close all the bridges crossing it in the city of Murcia for precaution.

Mud-colored water rushed through streets, carrying away parked cars and inundating the bottom floors of houses in many towns.

The Spanish weather service AEMET maintained its alert for the region, saying it is "at extreme risk" from torrential downpours.

The airports of Almeria and Murcia, trains and several roads were closed, and authorities asked residents to avoid driving.

Schools across southeastern Spain suspended classes on Friday, as the heavy rains are set to continue. In the region of Valencia alone, where schools were already closed on Thursday, around 536,000 students were affected, according to the regional government.

Local police, firefighters and rescuers were backed up by army units to attend to the hundreds of calls for help. Around 1,000 soldiers were being deployed to the area, the press officer of the military's emergency unit, Aurelio Soto, told TVE.

Rescuers in a small rubber boat being towed upstream by a jet ski into a flooded tunnel where four people were trapped on top of their cars. They later appeared rowing out with the saved travelers.

The mayor of the town of Los Alcázares, Íñigo Alfonso, made a call for boats that could help search for residents in need of rescue. Images showed streets and town squares submerged by the floodwaters.

Emergency services for the region of Murcia, which is south of Valencia, said that they have rescued 144 people from cars and flooded homes. Some stranded people had to be rescued by police helicopters from the roofs of buildings surrounded by water.

The Spanish government representative for the region of Murcia said that army units rescued 60 people from a campsite that had been cut off by the floods.

"All the region of Murcia is flooded. We have never seen this situation before," Fernando López Miras, the regional president for Murcia, told TVE.