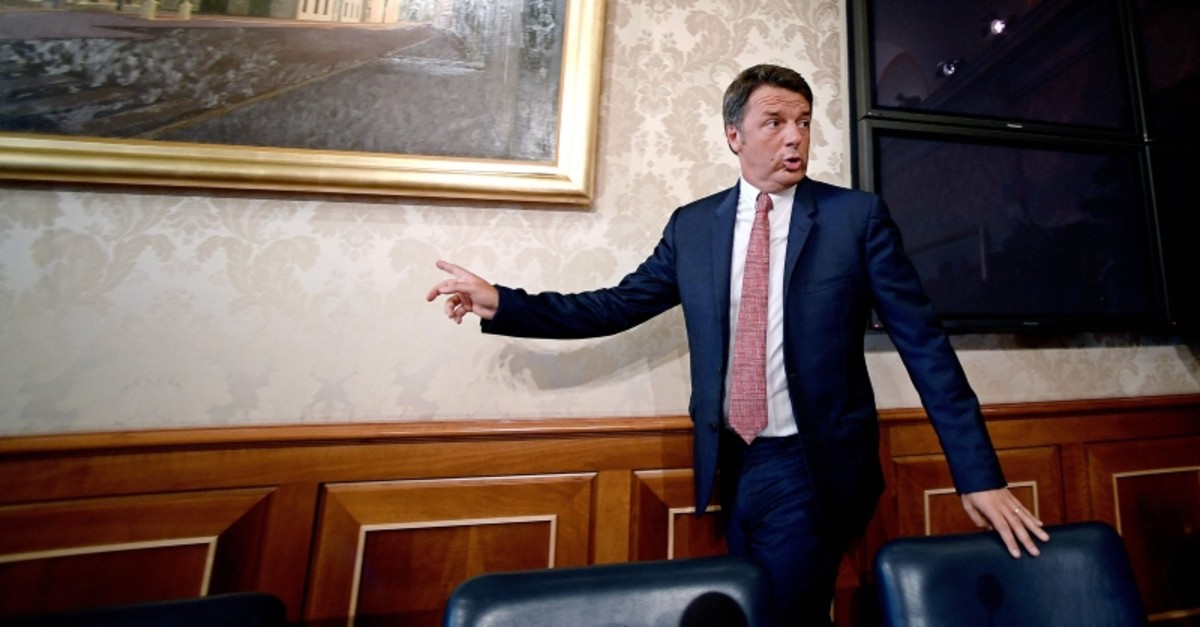 In this file photo taken on August 13, 2019, former Italian Prime Minister Matteo Renzi gestures as he arrives to address a press conference at Palazzo Madama in Rome. (AFP Photo)
by Compiled from Wire Services Sep 17, 2019 1:42 pm

Former Italian Prime Minister Matteo Renzi will lead a breakaway from the ruling center-left Democratic Party (PD) this week and set up a new centrist force, he was quoted as saying on Tuesday, stressing the move could broaden the appeal of the coalition government.

Renzi, who led a PD administration from 2014-2016, was instrumental in piercing together the new coalition earlier this month after the far-right League, led by former Interior Ministry Matteo Salvini, walked out of an alliance with the anti-establishment 5-Star Movement (M5S) in the hope of triggering an early election.

"I have decided to leave the PD and build together with others a new house to do politics differently," Renzi wrote on Facebook.

However, Renzi, now a member of Senate for PD, has had an abrasive relationship with his party, especially with left-wingers, and there have been persistent rumors he was planning to set up a new movement.

In an interview with daily newspaper la Repubblica published on Tuesday Renzi said PD was now a bunch of factions.

"I am afraid it will not be able to respond to Salvini's aggressions and to the difficult cohabitation with 5-Star Movement," he said.

"I want to spend the coming months fighting against Salvini," he said. "The bad populism he represents has not been defeated."

The parliamentary groups of the new force would be created this week, Renzi said, adding some 30 lawmakers would follow him.

PD has 111 seats in the lower house of Italian parliament, the Chamber of Deputies, and 51 in the Senate.

"That will be good for everyone," Renzi said of the breakaway, adding it would allow the government "to probably expand its parliamentary support."

"We are sorry," he said on Twitter on Tuesday.

Renzi, who was hailed as a reformer when he became Italy's youngest premier at the age of 39 in 2014, was a divisive figure within the PD, particularly for the party's left which is largely loyal to Zingaretti.

"After seven years of friendly fire I think we must take note that our values, our ideas, our dreams, cannot every day be the object of internal quarrels," Renzi wrote.

He resigned as premier in 2016 and fraught relations within the PD prompted repeated speculation that Renzi would split to form his own, more politically centrist, party.

"The victory we got in parliament against populism and Salvini was important to save Italy, but it's not enough," Renzi wrote.

According to analysts, Renzi's move might make it harder for Prime Minister Giuseppe Conte to keep his government in office. But others think Renzi might succeed in claiming the middle ground of Italian politics.

"Parliamentary support for the government will probably be broader," Renzi said.

He called Conte on Monday to reassure him that "I'm leaving the PD but (my) support for the government remains certain," the Corriere della Sera newspaper reported.

Twenty MPs are needed to form an autonomous parliamentary group. Around 10 senators out of the PD's 51 would also follow, the Corriere reported.

Support for Forza Italia has sunk since the 2018 national election, while backing for the far-right League has soared. Renzi's backers believe this has created a big hole at the center of domestic politics that they hope to fill.

"In the PD he would have been a minority shareholder without board position," he said.

"This is not a mortal threat to the government yet, but it makes its prospects less rosy because it increases fragmentation and may contribute to instability" he added.

Salvini took to Twitter to accuse Renzi of "first collecting jobs and ministries, then founding a 'new' party to fight Salvini... Italians will punish these sell-outs."

Renzi said his new party would not contest elections for at least a year.

If the current coalition survives, a general election is due in 2023 and European elections in 2024.
RELATED TOPICS