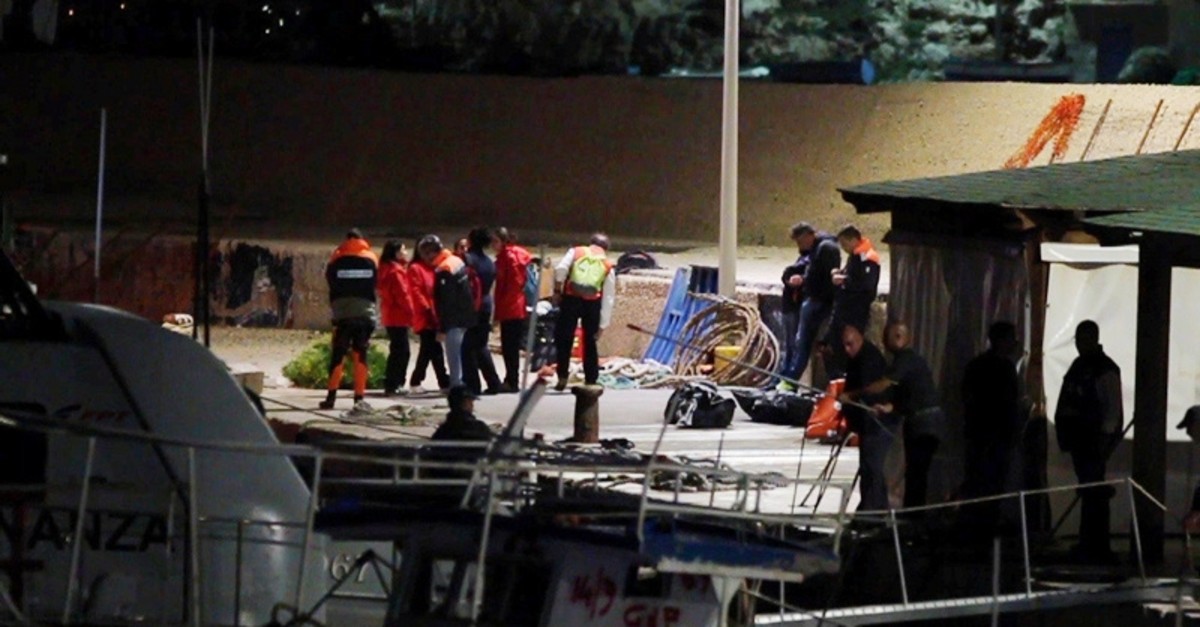 Survivors rescued by the Italian coastguard after their ship carrying some 50 migrants began taking on water, are brought to safety at the port of Lampedusa, Italy October 7, 2019 (Reuters Photo)
by Associated Press Oct 07, 2019 2:23 pm

At least nine people died when an overloaded migrant boat capsized near the island of Lampedusa, the Italian Coast Guard said Monday. Twenty-two people were rescued from the sea.

The smugglers' boat overturned as a patrol boat was preparing to take migrants on board in rough seas some 6 miles (10 kilometers) off Lampedusa just after midnight, the Coast Guard said in a statement.

Twenty-two migrants were rescued from the sea, and nine bodies were recovered — two immediately, and seven during a subsequent search operation. Italian Coast Guard helicopters and vessels were searching for more of the missing.

Doctors Without Borders says the Ocean Viking ship it operates has been asked by Italian authorities to join the operation.

Initial reports by authorities in Sicily who received the distress call put the number of migrants on board at around 50. Non-governmental organizations say as many as 30 migrants, including eight children, could be missing. The Coast Guard had no additional information on how many might be missing.

The U.N. refugee agency said the deadly shipwreck "highlights once again that urgent action is needed to address the situation on the Mediterranean."

UNHCR spokesman Charlie Yaxley in Geneva called for the EU to resume its search and rescue operation in the Mediterranean Sea, where more than 1,000 migrants have died so far this year, most of them on the dangerous crossing from Libya.

In the absence of an EU search and rescue operation, the job of rescuing migrants has largely been left to humanitarian rescue ships, which both Italy and Malta have consistently refused to allow into port.

Meanwhile, the Spanish aid group Open Arms said Monday it rescued 44 people, including one toddler and a months-old baby, on a wooden boat trying to reach European shores.

Gerard Canals, chief of mission of the Open Arms rescue boat, says the boat was found late on Sunday in Malta's rescue zone, about 50 miles (80 kilometers) from the Italian island of Lampedusa.

Canals says that Malta's rescue coordination center told the group not to offer the migrants any assistance. But Open Arms decided to rescue them anyway because the boat wouldn't have made it to land without fuel.

In video remarks distributed by the aid group, Canals says that all 44 rescued — 38 men, 4 women, a 4-year-old boy, and a baby around 6 to 9 months old — are in good condition.