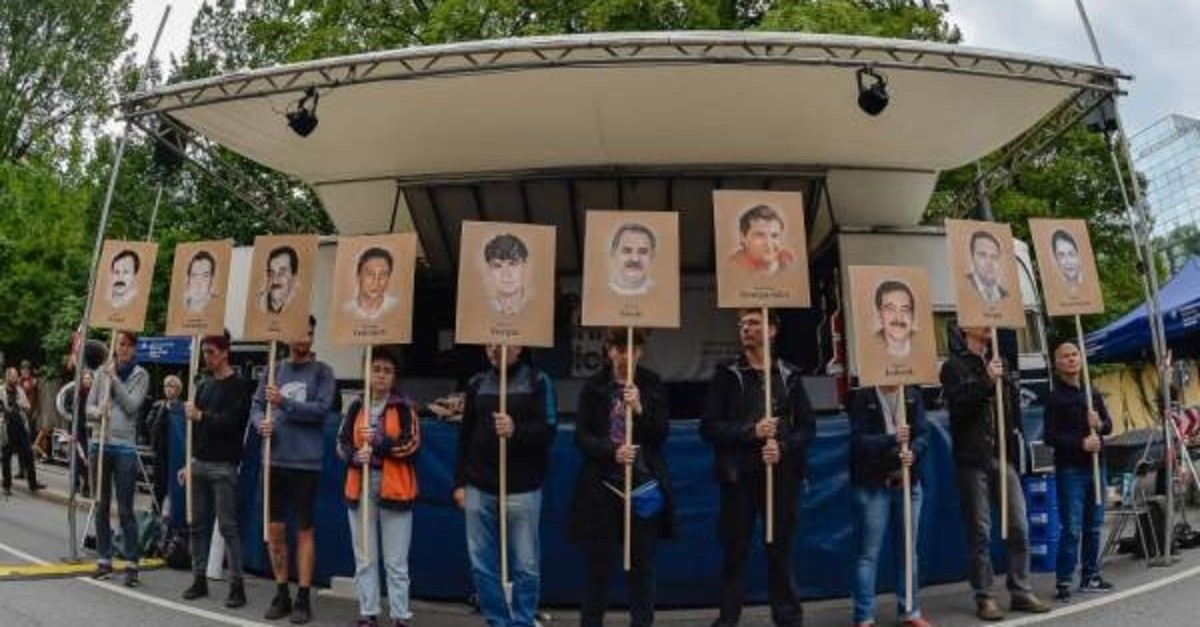 Protesters hold up signs showing pictures of the victims of the neo-Nazi NSU, Munich, July 11, 2018. (AFP Photo)
by Daily Sabah with DPA Oct 14, 2019 1:14 am
Several memorials for the victims of the German neo-Nazi extremist group the National Socialist Underground (NSU) have been vandalized more than once, the Welt am Sonntag newspaper reported yesterday. Acts of vandalism have been reported from five of the existing memorials, according to the report.
A stone marker was vandalized in Kassel in 2014, while a memorial in Rostock was damaged three times. In Nuremberg, unidentified assailants removed one memorial and spray painted a swastika on the other, Welt am Sonntag reported. In Heilbronn, a memorial was dug up and thrown into a river in 2008. Unidentified assailants defaced a plaque with spray paint in 2014.
Earlier this month, police in Zwickau said a wooden bench with an inscription commemorating the victims of the NSU had been destroyed. Vandals also sawed through a tree in Zwickau that was planted to commemorate one of the NSU’s murder victims. The oak was planted in memory of the first NSU victim, Enver Şimşek. Another memorial was desecrated in Zwickau in 2016. A police unit for fighting politically motivated crime is investigating.
The NSU killed eight Turkish immigrants, one Greek citizen and a German police officer between 2000 and 2007, but the murders have long remained unresolved. Recent investigations have revealed severe failures of intelligence and the failure of police units in the eastern state of Thuringia to disrupt the group. The NSU is believed to have been founded by three far-right extremists, Uwe Mundlos, Uwe Bohnhardt and Beate Zschaepe, who lived in Thuringia in the early 1990s.
The German public first learned about the existence of the NSU on Nov. 4, 2011, when two members of the group, Mundlos and Bohnhardt, reportedly died in a murder-suicide following an unsuccessful bank robbery. Until 2011, Germany’s police and intelligence service ruled out any far-right motive for the murders and instead treated immigrant families as suspects.
Intelligence services have for years been increasing surveillance of ultra-right groups, which are seen as a growing threat and capable of carrying out terrorist attacks similar to those that left 51 dead at two mosques in New Zealand. The country is home to some 12,700 potentially violent far-right radicals, according to the BfV domestic intelligence agency. Some 66% of Germans believe the state is too lenient when it comes to dealing with Nazis and far-right extremists.
Last Update: Dec 20, 2019 1:02 am
RELATED TOPICS