Johnson insists Brexit deal on course despite request for delay 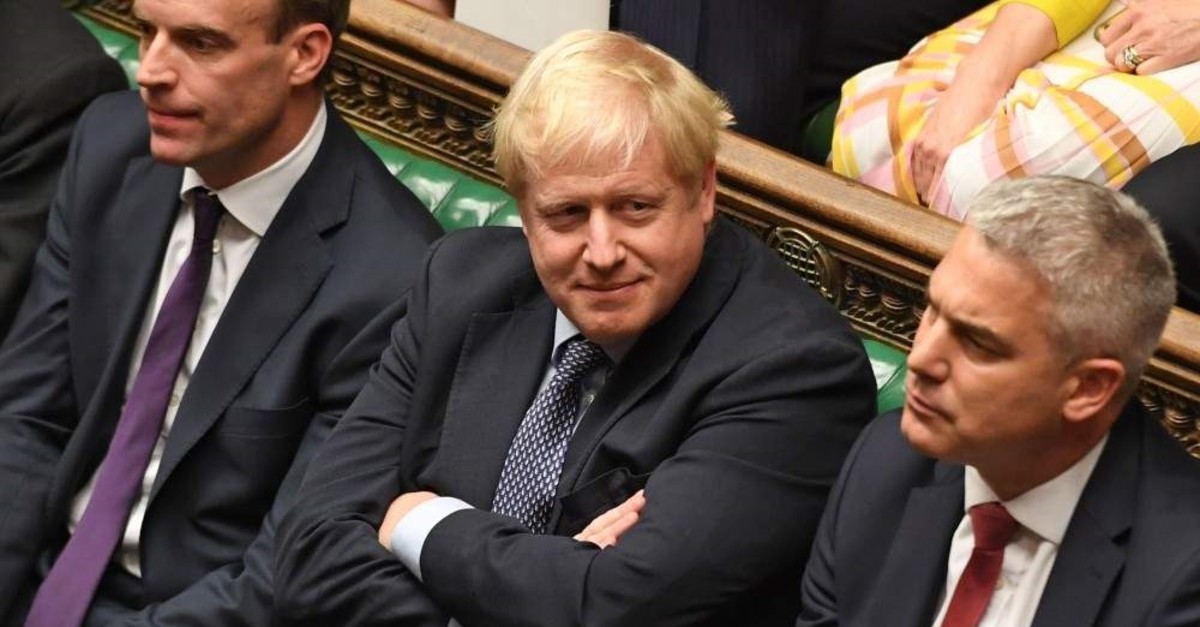 British Prime Minister Boris Johnson pressed ahead yesterday with plans to try to win what could turn out to be a historic Commons vote on his new Brexit deal this week, despite Parliament forcing a reluctant prime minister to request another delay.
Foreign Secretary Dominic Raab claimed that the British government now had a fragile cross-party coalition of at least 320 MPs willing to back the deal.

The government will bring forward this week the domestic legislation needed to implement the divorce deal, with a first vote as soon as tomorrow.
Separately, it is seeking a new yes-or-no vote on approving the deal today, although this may fall foul of parliamentary procedure.

In a day of high drama on Saturday, MPs in the House of Commons passed up the chance to decide on the revised withdrawal agreement that Prime Minister Boris Johnson had negotiated with the EU.
That defeat leaves Johnson under mounting pressure to find a way out of paralyzing impasse on when and how Britain would leave the EU bloc after Britons narrowly voted to exit in a 2016 referendum.
Johnson sent an unsigned letter to the EU late Saturday seeking a delay to Britain’s impending Oct. 31 departure from the bloc, as required by law. But he followed it with a signed letter indicating that he does not favor another Brexit extension.
“My view, and the government’s position, [is] that a further extension would damage the interests of the U.K. and our EU partners, and the relationship between us,” Johnson wrote to European Council President Donald Tusk.

Johnson has long declared that he plans to take the U.K. out of the EU on Oct. 31 come what may, and his minister in charge of Brexit again emphasized that stance. “We are going to leave by Oct. 31st,” Michael Gove, Johnson’s number two, told Sky News yesterday.
“We have the means and the ability to do so.” Brussels officials pressed on with plans to ratify the divorce deal as European leaders considered Johnson’s delay request. Ambassadors and senior officials from the other 27 member states met yesterday.
“The EU is keeping all options open and has therefore initiated the ratification process so that it can be handed over to the European Parliament Monday,” an EU diplomat told Agence France-Presse (AFP).
“The EU will probably pursue this strategy until there is clarity on the British side,” he said, speaking on condition of anonymity. Tusk will spend a “few days” canvassing member state leaders, and diplomats said this would mean the British Parliament will have to vote on Brexit again before hearing their decision on the Oct. 31 departure.

The Brexit date has already been pushed back twice from March 29, to the fury of those who wanted to chart their own course and abandon the European project after nearly 50 years.