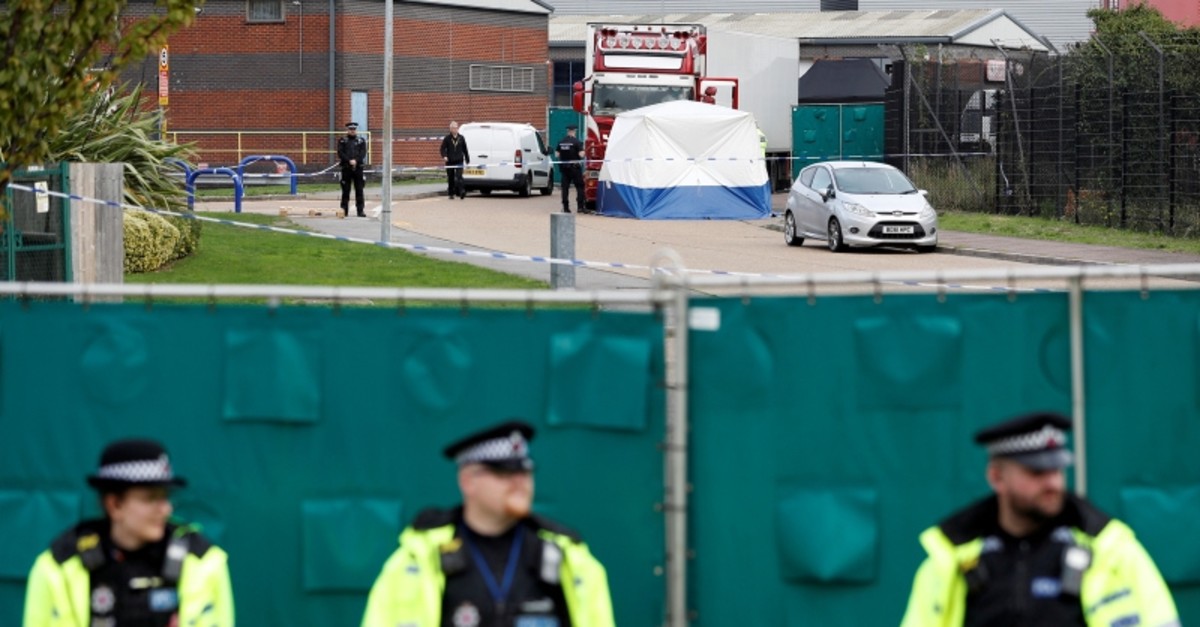 British police raided two sites in Northern Ireland and questioned a truck driver as they investigated the deaths of 39 people found in a truck container at an industrial park in southeastern England. British media, citing sources, reported Thursday that the victims were all Chinese citizens.

The truck's driver — a 25-year-old man from Northern Ireland — has been arrested on suspicion of murder. He has not been charged and his name has not been released.

Essex Police would not confirm the reports by Britain's Press Association, the BBC and ITV on the victims' nationalities.

If so, the tragedy recalls the deaths of 58 migrants in 2000 in a truck in Dover, England who had undertaken a perilous, months-long journey from China's southern Fujian province and were discovered stowed away with a cargo of tomatoes after a ferry ride from Zeebrugge, the same Belgian port used in the latest tragedy.

Britain remains an attractive destination for immigrants, even as the U.K. is negotiating its divorce from the European Union. Upon hearing of the latest deaths, British Prime Minister Boris Johnson vowed in Parliament on Wednesday that people smugglers would be prosecuted to the full extent of the law.

Groups of migrants have repeatedly landed on English shores using small boats for the risky Channel crossing, and migrants are sometimes found in the trunks of cars that disembark from the massive ferries that link France and England.

But Wednesday's macabre find in an industrial park was a reminder that criminal gangs are still profiting from large-scale human trafficking.

The truck and the trailer with the people inside apparently took separate journeys before ending up at the Waterglade Industrial Park in Grays, 25 miles (40 kilometers) east of London, where it was found overnight Wednesday. British police said they believe the container went from the port of Zeebrugge to Purfleet, England, where it arrived early Wednesday. The truck cab is believed to have come from Northern Ireland.

U.K. authorities have warned for several years that people smugglers are turning to Dutch and Belgian ports because of increased security on the busiest trade route between Calais in France and Dover in England.

Britain's National Crime Agency warned in 2016 that people smuggling using containers on ferries was "the highest-priority organized immigration crime threat." The same year, the U.K. Border Force identified Zeebrugge and the Hook of Holland in the Netherlands as key launching points for people trafficking into Britain.