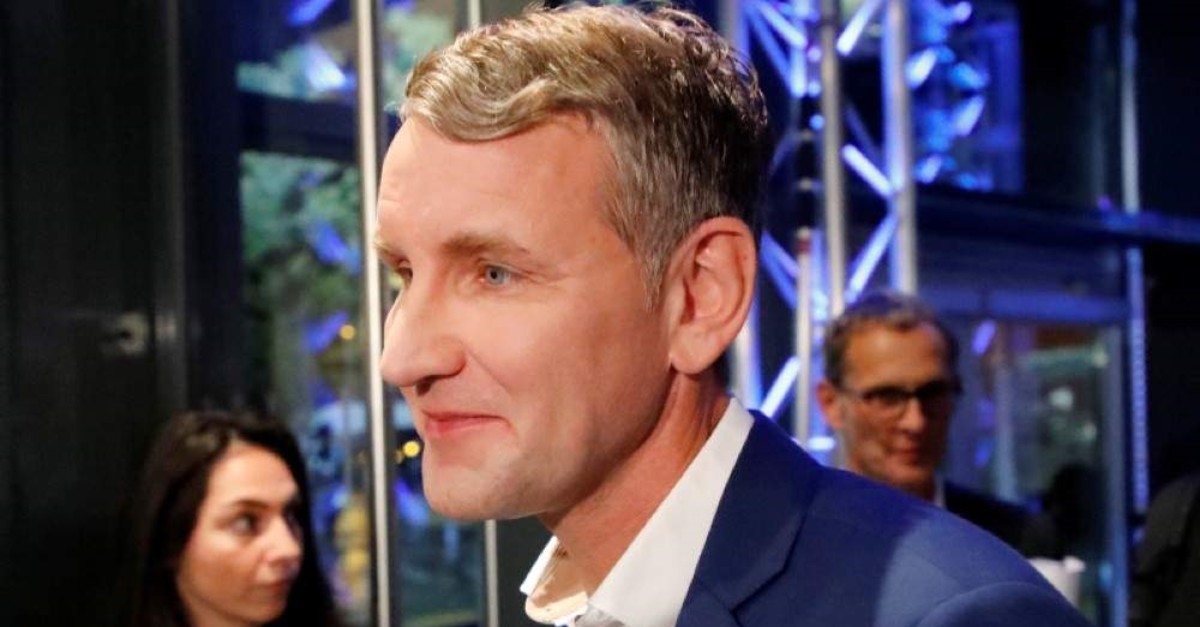 Bjoern Hoecke, far-right Alternative for Germany (AfD) party leader and top candidate for the Thuringia state elections is seen at the state parliament in Erfurt, Germany Oct. 27, 2019. (Reuters Photo)
by Compiled from Wire Services Oct 27, 2019 9:49 pm
Germany's far-right Alternative for Germany (AfD) party doubled its votes in state elections in the eastern state of Thuringia on Sunday, while Chancellor Angela Merkel's conservatives suffered the worst results in their history.
The anti-immigrant, anti-Muslim AfD was projected to come in second with 23.8% of the vote, up from 10.6% in the last election, according to projections by public broadcaster ARD.
Merkel's Christian Democratic Union (CDU) could manage to win 22.5%, down 11 points from the last election, historically the worst result for the party in Thuringia.
The center-left Social Democratic Party (SPD) was projected to win 8.5%, down from 12.4% they had secured in the last election in the ex-communist state.
The socialist Left Party (Die Linke) came first in the state elections by securing a record 29.7% of votes, up from 28.2% in the last election in 2014.
However, the party could not win enough votes to govern alone. Thuringia's popular premier Bodo Ramelow, who became in 2014 the first leader of the hard-left party Die Linke to head up a German state government, may have difficult coalition talks ahead of him.
According to the current projections, a repeat coalition of Die Linke, Greens and SPD would have no majority in the local parliament in Erfurt.
Election turnout stood at around 66%. In 2014, only about half of the voters, 52.7%, cast votes. Postal votes are not included in the figures.
The vote came less than a month after a far-right terrorist attack on a synagogue heightened criticism of the AfD fueling anti-Semitism in Germany.
German political leaders have joined Jewish groups in partially blaming the AfD for an anti-Semitic attack on Oct. 9 in the neighboring state of Saxony-Anhalt, when a German man armed with explosives and a gun tried but failed to gain access to the synagogue in the city of Halle.
Two people, a passerby and a man in a kebab shop, were killed in the attack, which the man later confessed had a right-wing extremist and anti-Semitic intent.
The AfD's chief in Thuringia, Bjoern Hoecke, is a particularly controversial figure who sometimes uses language that hearkens back to Hitler's Third Reich. On Sunday, he said the result for the AfD showed that his party was on its way to become a major party in Germany and showed that voters were fed up with the performance of the current government.