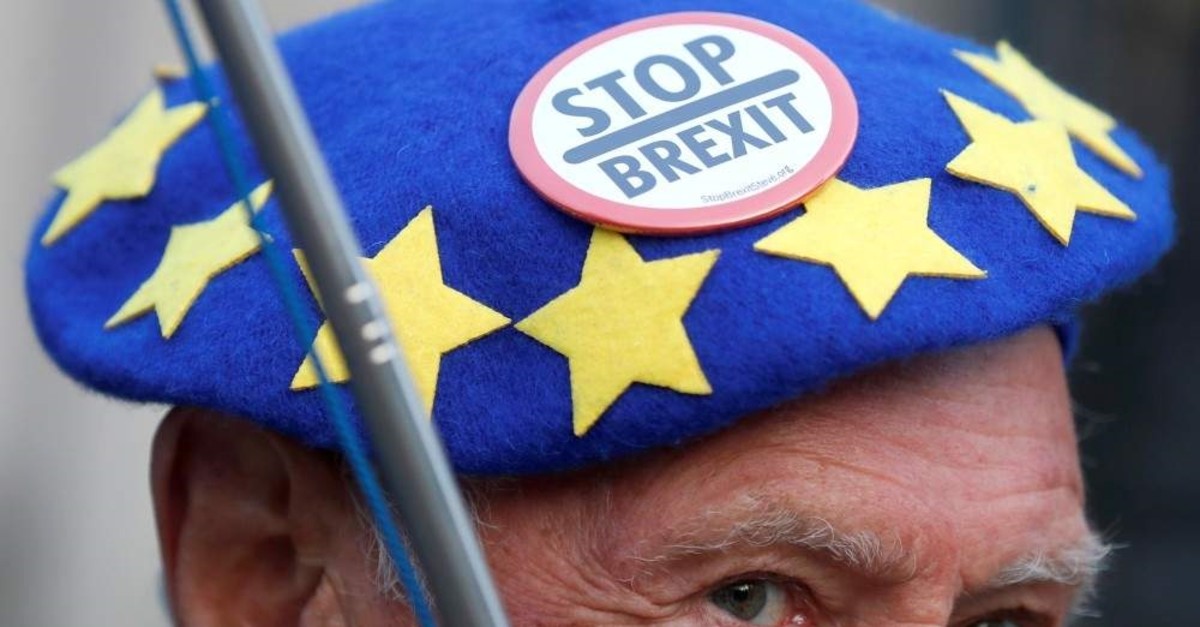 An anti-Brexit protester demonstrates outside the Houses of Parliament in London, Britain, October 28, 2019. (Reuters Photo)
by Compiled from Wire Services Oct 28, 2019 10:10 pm
British lawmakers on Monday rejected an attempt by Prime Minister Boris Johnson to hold an early general election on Dec. 12, as he sought to break the political deadlock over Brexit.
A total of 299 MPs voted in support of his proposal, with 70 against, but he did not secure the backing of the two-thirds of the 650 MPs required by law to pass the motion.
However, Johnson said that a one-line bill for an early general election will be submitted on Tuesday. The bill proposes election on Dec. 12, as in today's motion, but only needs a simple majority in the House of Commons.
Johnson said he would try again this week, using a different procedural bill, which only needs a simple majority to pass.
"The only way to get Brexit done is to go to the people of this country," Johnson told legislators, accusing his opponents of betraying the voters' decision to leave the EU.
He said that unless there was an election, the government would be "like Charlie Brown, endlessly running up to kick the ball only to have Parliament whisk it away."
"We cannot continue with this endless delay," he added.
The vote came on the day Johnson wrote a letter confirming the acceptance of a flexible extension to the Brexit deadline to the EU.
Johnson was forced to ask for an extension after failing to secure a timetable for parliament to fast-track his revised Brexit deal.
The EU agreed to accept the U.K.'s request for a Brexit extension until Jan. 31 of next year, EU Council President Donald Tusk announced on Monday.
"The EU27 has agreed that it will accept the UK's request for a #Brexit flextension until 31 January 2020. The decision is expected to be formalized through a written procedure," Tusk wrote on Twitter.
The "flextension" means that the U.K. will be able to leave the EU before the new deadline if Johnson's revised Brexit deal is ratified by the House of Commons on an earlier date.
U.K. voters decided by a slim margin to leave the EU in a 2016 referendum.
Last Update: Dec 20, 2019 1:17 am
RELATED TOPICS