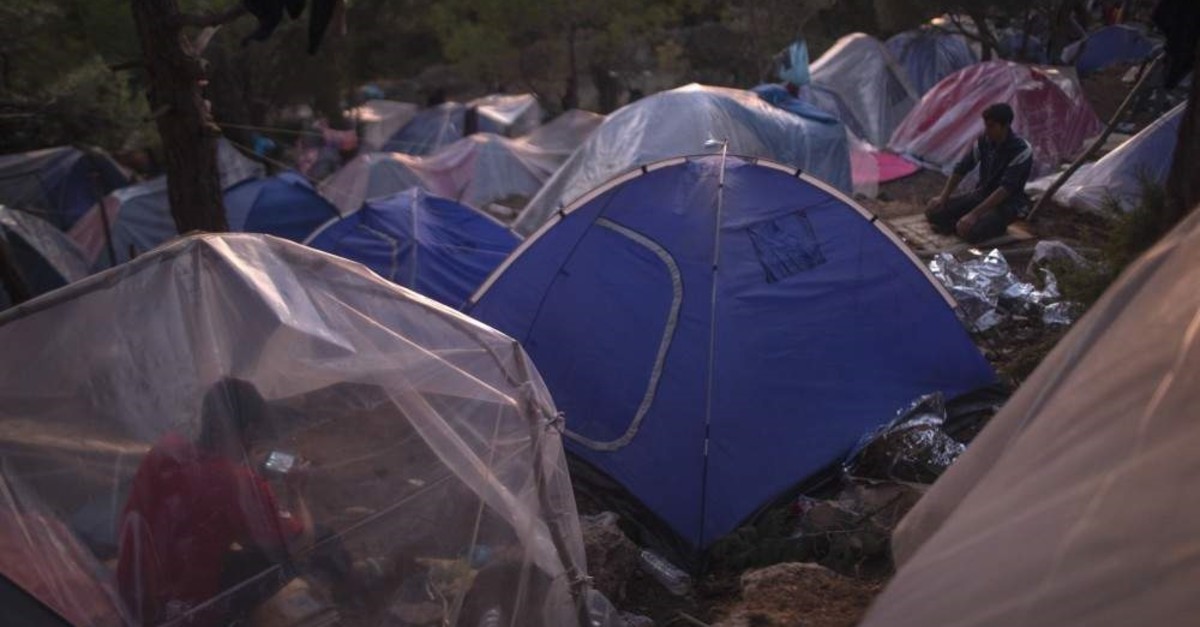 In this Wednesday, Sept. 25, 2019 photo, a Syrian refugee prays next to tents at the perimeter of the overcrowded refugee and migrant camp at Vathy on the island of Samos, Greece. (AP Photo)
by Oct 29, 2019 12:30 pm
Greece should scrap a draft law that threatens to restrict access to protection for asylum seekers from Syria, Iraq and Afghanistan, Human Rights Watch (HRW) said Tuesday.
Athens is currently struggling with the biggest resurgence in refugee arrivals since 2015, when more than a million people crossed into Europe from Turkey via Greece.
"The bill is a naked attempt to block access to protection and increase deportations in the face of the recent increase in arrivals," said Eva Cosse, Greece researcher at HRW.
The conservative government of Prime Minister Kyriakos Mitsotakis, which came to power in July, says the draft law is intended to streamline what it sees as a lengthy asylum process and facilitate the deportation of rejected asylum seekers. It has accused the previous leftist government of managing the issue poorly, resulting in thousands of people crammed into overcrowded camps.
HRW said the draft legislation, which is due to be debated by parliament this week, would make it easier to detain asylum seekers for longer periods and scrap important protections for vulnerable people, including unaccompanied children. It includes numerous procedural changes that would impede access to a fair asylum process and compromise the right of appeal, HRW added.
"The bill also introduces stricter rules for receiving asylum seekers, delays access to the right to work, narrows the definition of family, and imposes more burdens on torture victims in being recognized as such," HRW said.
Earlier this month the United Nations refugee agency UNHCR also expressed concern about the Greek proposals to overhaul laws affecting asylum seekers, saying they could weaken the protection of refugees.
HRW called on the European Commission, which financially supports migration management in Greece, to openly press the Greek government to ensure that changes in the law will include safeguards required by EU standards. More than 12,000 people arrived in Greece in September, the largest number in the three-and-a-half years since the EU agreed a deal with Turkey to seal the Aegean corridor to Europe.