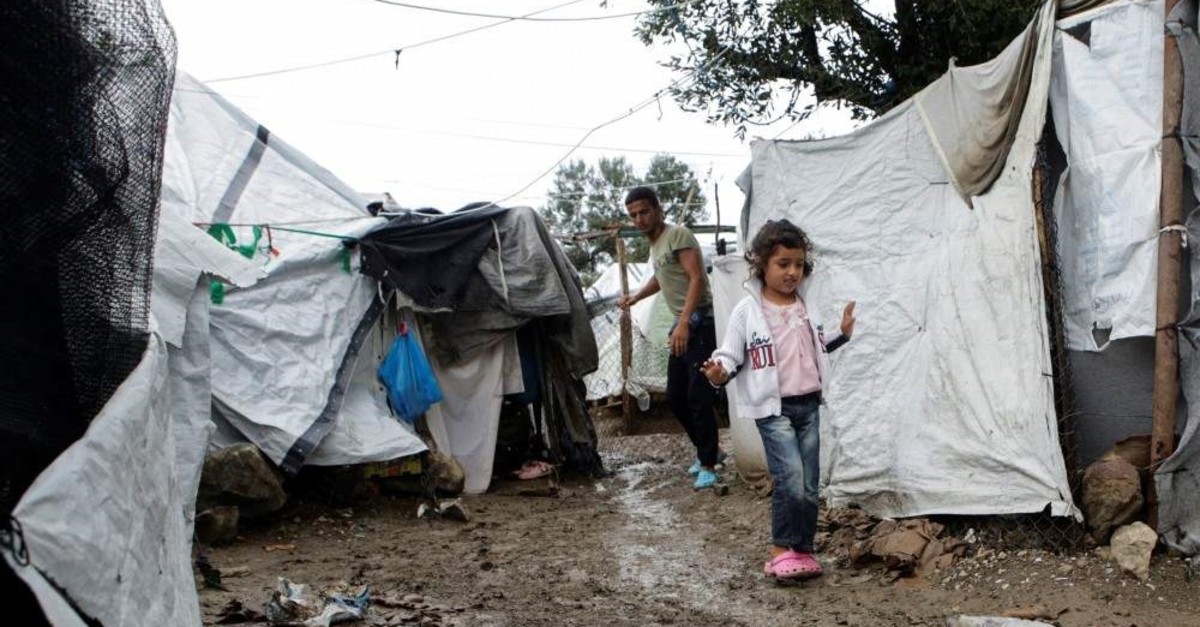 A girl makes her way next to tents at a makeshift camp for refugees and migrants, following a rainfall on the island of Lesbos, Greece, Oct. 8, 2019. (Reuters Photo)
by German Press Agency - DPA
Nov 01, 2019 12:47 pm
The Greek parliament passed a new, tougher asylum law on Friday in a bid to accelerate the distribution of refugees and the expulsion of migrants even as it faces criticism from international human rights watchdogs.
Parliament voted in favor of the new law after a marathon debate stretching from Thursday morning until the early hours of Friday.
Conservative Prime Minister Kyriakos Mitsotakis had promised the overhaul of the asylum procedure after he took over in July, saying that Greece simply cannot cope with tens of thousands of people stuck in the inefficient system.
Addressing Parliament before the vote, Mitsotakis said he wanted a "transparent and functional system" which will protect refugees, but without "opening the gates" to everyone.
"Those who know they do not merit asylum but try to enter and stay in our country will no longer be tolerated," he added.
The start of Mitsotakis' term coincided with a surge in migrant arrivals and the overwhelming of camps set up on Aegean islands to process asylum applications.
With the number of arrivals at a two-year high and the processing slow going, the migrant population on the islands has swelled from 14,000 in April to around 35,000 - around six times the capacity of the camps.
The situation in the camps "appalled" the Council of Europe Human Rights Commissioner, who on Thursday said Greece must urgently improve the situation there.
"Urgent measures are needed to address the desperate conditions in which thousands of human beings are living," Mijatovic said after visiting the so-called hotspots for the processing of asylum applications on Lesbos, Samos and in Corinth, on the mainland.
The European human rights chief said she was appalled by the unhygienic conditions in camps on the islands - which the migrants and asylum seekers cannot leave.
Following the surge across the Aegean in recent months, the situation in the "vastly overcrowded camps ... no longer has anything to do with the reception of asylum seekers," but has "become a struggle for survival," Mijatovic said.
While welcoming the Greek government's plan to transfer 20,000 migrants from the islands to the mainland by the end of the year, she also urged a change to the policy of keeping the migrants on the islands, warning that overcrowding will otherwise continue.
Mitsotakis said he wants the new law to accelerate the processing and particularly the return of those whose applications are rejected, in line with a 2016 EU-Turkey agreement.
But international organizations, as well as several groups in Greece, criticized the draft bill, warning it brushes off the rights of the asylum seekers.
Human Rights Watch this week said the asylum bill was a "naked attempt to block access to protection and increase deportations in the face of the recent increase in arrivals."
The U.N. refugee agency, the UNHCR, earlier said the new rules "will endanger people who need international protection" and could lead to the expulsion of many back to countries where their lives may be under threat.
Last Update: Dec 20, 2019 1:22 am