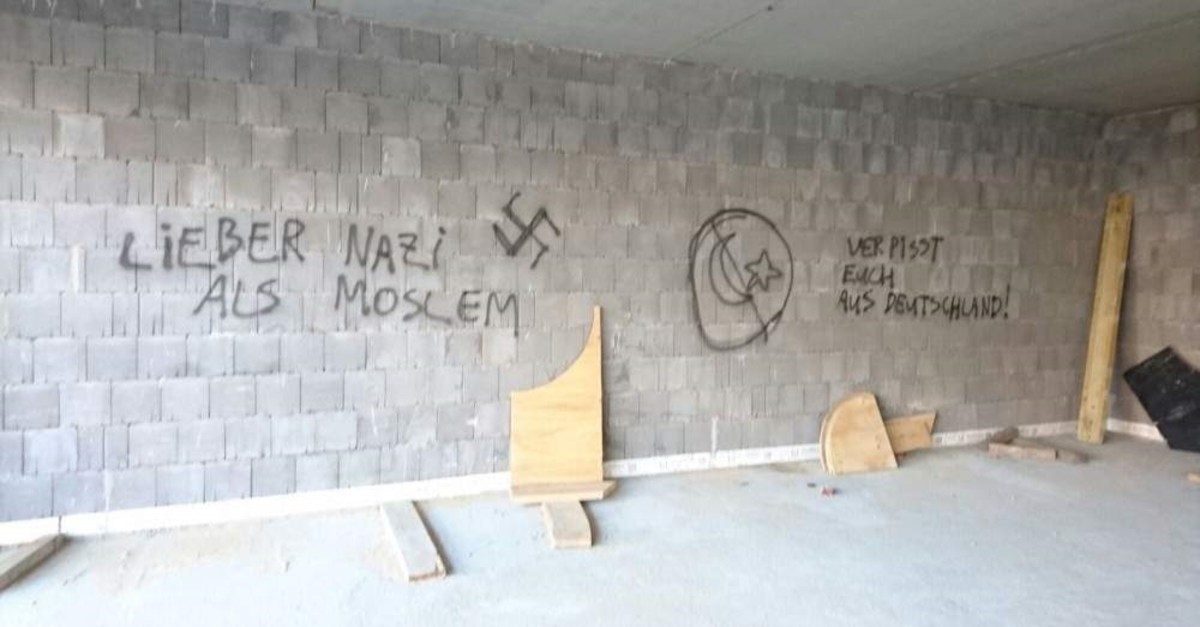 This 2016 photo shows anti-Muslim and anti-Turk slogans written on an under-construction mosque in the German city of Herringen. (AA Photo)
by Anadolu Agency Nov 02, 2019 8:22 pm

Germany's Muslim community is "not feeling safe enough" amid growing Islamophobia in the country, a German Muslim leader told Anadolu Agency (AA) in Berlin on Friday.

"This year we had more than 80 attacks on mosque communities in Germany. The security situation is very tense. Muslims are not feeling safe. Talks with security authorities have shown that no sufficient concept exists and, above all, we as Muslims are not being sufficiently advised," said Burhan Kesici, the chairman of the Berlin-based Islam Council.

"Security authorities need to work closely with the communities, develop concepts and provide advice [to them]. Otherwise, Muslims lose confidence in the security agencies, because protection is simply being blurred," he added.

Kesici's remarks came only a day after police were forced to evacuate a mosque in the western German city of Cologne on Thursday following a bomb threat.

Asked by AA about a reaction to the latest bomb threat against the mosque, German Interior Ministry Spokesman Steve Alter said: "The minister has repeatedly expressed concern about attacks on religious institutions in recent weeks."

Following a thorough search at the Cologne Central Mosque complex with special teams and bomb-sniffing dogs, police found no bomb and determined the threat was a hoax.

It was the second time in four months that the Turkish-Muslim umbrella group DITIB, which runs the mosque, had been threatened with a bomb attack.

The mosque complex in Cologne also houses the headquarters of DITIB.

In June, a bomb threat, apparently emailed by a far-right organization, had also forced the evacuation of visitors and staff at the mosque complex, however it also turned out to be a hoax.

Germany has witnessed growing Islamophobia in recent years sparked by hate propaganda of far-right parties. Police recorded 813 hate crimes against Muslims last year, including verbal insults, threatening letters and physical attacks which led to the injury of at least 54 Muslims. More than 100 mosques and religious institutions were also attacked by far-right extremists in 2018.

A country of over 81 million people, Germany is home to the second-largest Muslim population in Western Europe after France.

Among the country’s nearly 4.7 million Muslims, at least 3 million are of Turkish origin.