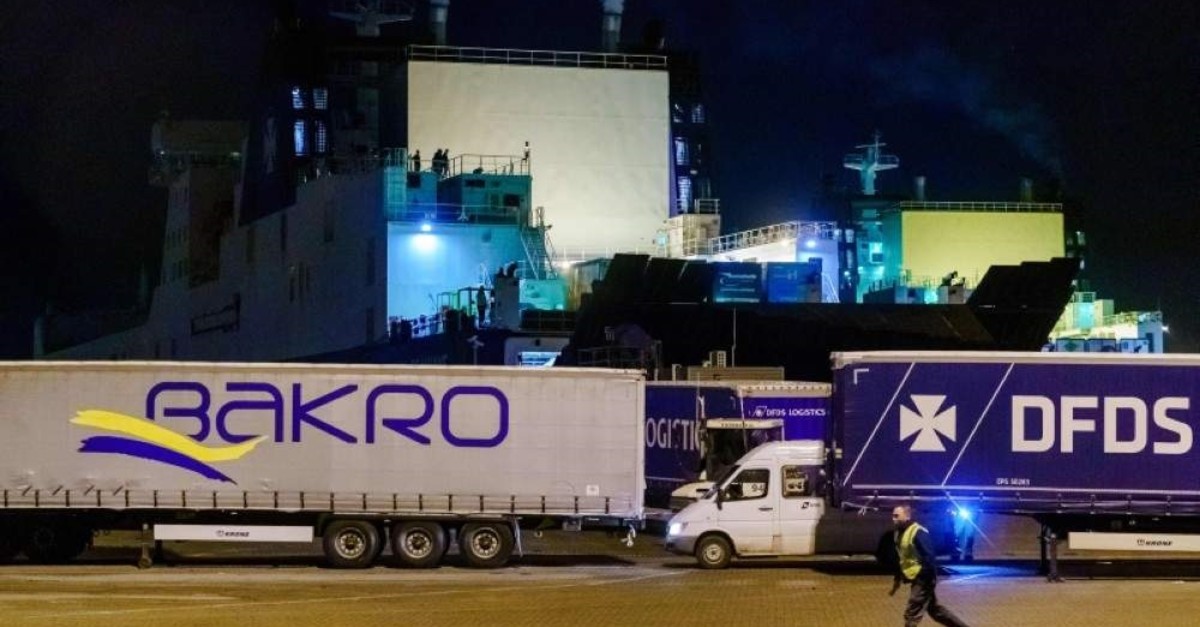 A picture taken on Nov. 19, 2019 shows a ship where 25 stowaways where found onboard, in the harbour of Vlaardingen, the Netherlands.(AFP Photo)
by Compiled from Wire Services Nov 20, 2019 9:05 am
A ferry crew found 25 migrants in a refrigerated container on a North Sea ferry sailing from the Netherlands to Britain on Tuesday, emergency services said.
The cargo vessel bound for Felixstowe returned to the Dutch port of Vlaardingen, near Rotterdam, as soon as the stowaways were found, they said in a statement.
The people found in the container received medical attention at the port and two were taken to hospital for further treatment for possible hypothermia.
The migrants are most likely from Kuwait and Iraq, police in the Dutch city of Rotterdam said Wednesday. The identification process has not yet been completed, so their origins cannot be confirmed with all certainty, police said via Twitter. The group also included six minors.
The driver of the refrigerated lorry has been arrested. It was initially unclear whether the 39-year-old Romanian knew about the people in the container.
"On board a ship it turned out that several people were found in a cooling container. The ship returned to the harbor," said the Rotterdam region emergency services on Twitter.
"The 25 people were taken off the ship and given the medical care they need. Earlier the message came from the ship that no people died.
"Two people were transported to hospital for extra medical care. Twenty-three people were transferred to a police location after a medical check-up."
DFDS Seaways, which operates the cargo ferry, said that the migrants had come on board on a lorry trailer, De Telegraaf newspaper said.
A bus took away the mainly male group, some of whom were wrapped in silver thermal blankets.
The discovery comes a month after 39 Vietnamese people were found dead in a refrigerated truck in Britain, again laying bare the risks of illegal migrant routes to Europe.
The mayor of Vlaardingen, Annemiek Jetten, said "more and more" people were trying to cross the Channel and had not been put off by the deaths of the Vietnamese migrants.
"I think people are so desperate that they keep trying, despite the tragic events in the U.K. not so long ago," Jetten told broadcaster NOS.
She added that it was not clear if more people were trying to get to Britain before immigration laws become tougher after its scheduled exit from the EU next year.
Separately on Tuesday Dutch border police intercepted a bus carrying 65 Moldovan nationals including children who were planning to claim asylum, Dutch media reported.
Last Update: Dec 20, 2019 1:48 am
RELATED TOPICS