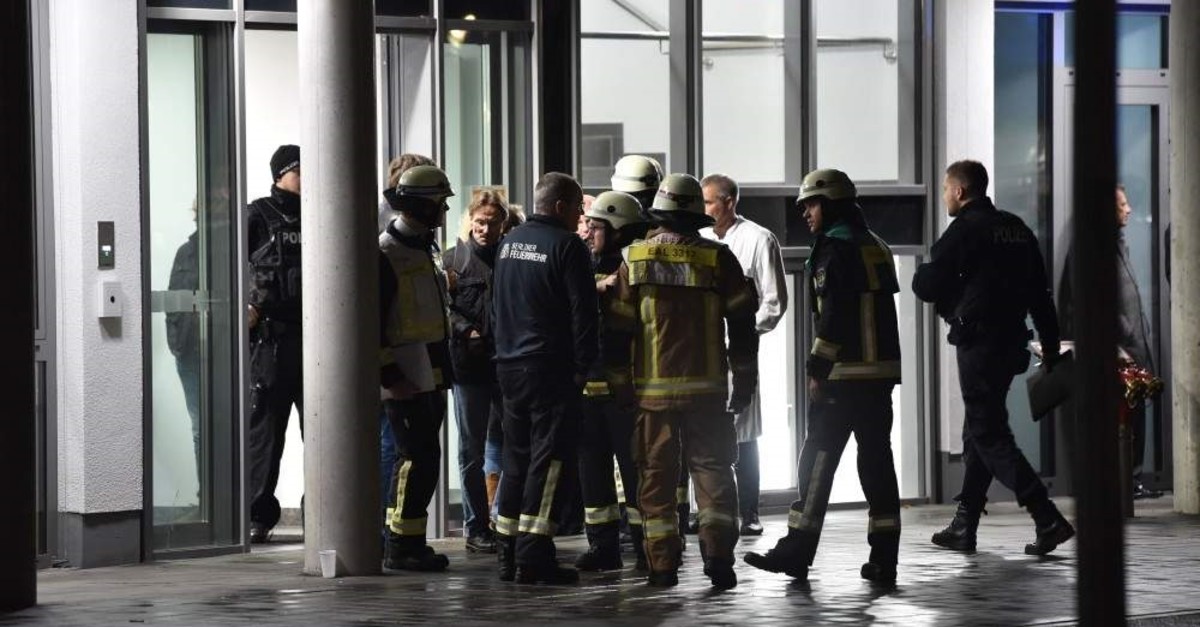 Policemen, firefighters and medical staff stand in front of the hospital after a doctor was stabbed to death as he delivered a lecture at the Schlosspark hospital in the western Berlin neighborhood of Charlottenburg, on November 19, 2019. (AFP Photo)
by Daily Sabah with AP Nov 20, 2019 1:24 pm

The son of former German President Richard von Weizsaecker was stabbed to death while he was giving a lecture at a hospital in Berlin where he worked as a head physician, police said Wednesday.

A 57-year-old man was taken into custody after a man suddenly jumped up from the audience at the Schlosspark-Klinik and attacked Fritz von Weizsaecker with a knife on Tuesday evening. According to the police, an officer who happened to be at the scene tried to stop the attacker but was seriously injured. The assailant was eventually overwhelmed by several attendees and handed over to the police.

"We cannot yet say anything about the attacker’s motive,” police spokesman Michael Gassen said, adding that the suspect is still being questioned. The suspect has no previous record of felonies.

Von Weizsaecker died at the scene despite immediate attention from colleagues.

The hospital partially shut down after the attack but reopened Wednesday morning. The suspect is to be brought before a judge on Wednesday, the police said. Further details on the identity have not yet been shared with the public.

The police have a launched a full-scale investigation. Authorities are questioning Weizsaecker's family to determine if any threats had been received. The lecture was open to the public and could be attended after registration.

The 59-year-old doctor was the youngest of the former president’s four children. His sister Beatrice von Weizsaecker posted a picture of Jesus on the cross on Instagram after the murder of her brother.

Von Weizsaecker studied and worked at several hospitals in Germany and abroad, including Harvard Medical School in Boston and a hospital in Zurich, Switzerland. His fields of expertise were internal medicine and gastroenterology.

On Tuesday night, he was giving a lecture about fatty liver disease, an increasingly common medical condition. Local media reported that several colleagues attended the lecture.
The von Weizsaeckers are one of Germany’s most prominent families. Richard von Weizsaecker was one of the country’s most esteemed presidents, who served as head of state – a largely ceremonial post – from 1984 to 1994.
In 1985, then-West German President von Weizsaecker called the Nazi defeat Germany's "day of liberation" in a speech marking the 40th anniversary of the war's end. His words were supported by most Germans, and to this day the speech is often cited by politicians and taught in schools. Von Weizsaecker died in 2015.

The murder of Fritz von Weizsaecker echoes a similar incident from 2016, when a man fatally shot a doctor at Berlin’s Benjamin Franklin Hospital before killing himself.