Tens of thousands march in France, Italy to protest violence against women 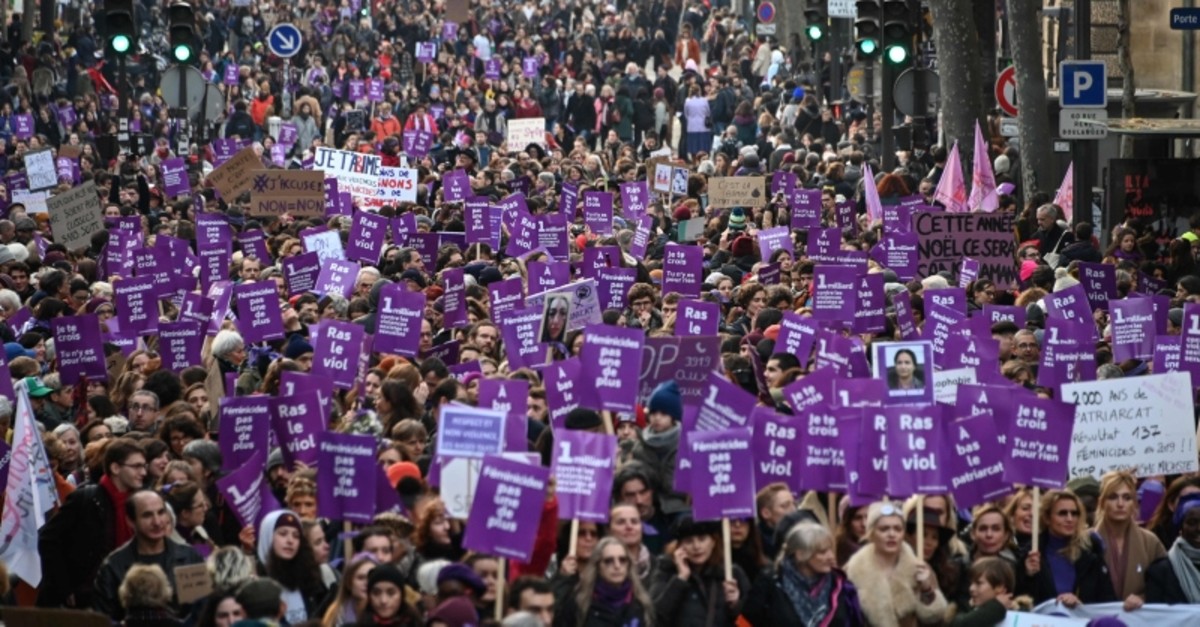 Tens of thousands marched in France and Italy Saturday calling for an end to violence against women, remembering the dozens killed in each country this year by current or former partners.

Central Paris was awash with purple -- the color adopted for the campaign -- with some protesters holding up placards bearing the image of a relative or friend killed.

Some signs bore the words "Break the silence, not women," and "Aggressor, stalker, you are done for, the women are in the street".

The Paris march, mainly attended by women, was one of 30 organized throughout France involving nearly 70 organizations, political parties, unions and associations.

A count by the Occurrence consultancy, commissioned by the news media including AFP, put the turnout in the French capital at 49,000.

Feminist collective #NousToutes ("All of Us") meanwhile said 100,000 marched in Paris and 150,000 across France, hailing it as "the biggest march against gender-based violence in French history".

Caroline De Haas, one of the Paris organizers, said "the level of awareness is moving at breakneck speed".

In Italy, tens of thousands of people, mainly women, marched in the capital Rome.

March organizers "Non Una de Meno!" (Not One Less!) say 94 women have been killed by their partners or former partners this year.

The procession moved through the city's old quarter behind a large banner that read: "Against your violence, we are in revolt!"

Banners from political parties and unions were absent at the request of the organizers and many of those taking part wore pink, the color of choice for the demonstration.

"We are the fierce and powerful voice of all those women who no longer have a voice," said one banner.

A float that played music along the route also broadcast the names of women killed by their partners or ex-partners this year.

"Everywhere in the world, women are revolting against patriarchal, racist, institutional, environmental and economic violence," said a statement from Non Una Di Meno.

At 4:30 pm (1530 GMT) the marchers sat down on the ground and remained silent for a few minutes in memory of the women who had been killed.

Italy's Economy Minister Roberto Gualtieri on Saturday announced 12 million euros would be released to help the children of women killed by their partners.

It will be used to fund scholarships, medical costs and professional training, he tweeted.

In France, a total of 116 women have been murdered in France so far this year by their husband, partner or ex-partner, according to an AFP investigation.

The group "Femicides by companions or ex" puts the toll at 137.

Some 121 were killed in France last year, according to official figures.

One woman is killed in France every three days by their partner or ex-partner, while marital violence affects 220,000 Frenchwomen every year.

"We can no longer count the number of cases where femicides could have been avoided," the Paris march organizers NousToutes said on Facebook.

"With this march, we will make the public authorities take appropriate measures."

Justice Minister Nicole Belloubet has said: "Our system is not working to protect these women."

The government is expected to announce about 40 measures on Monday to tackle the scourge.

De Haas and other activists have said a billion euros needs to be invested to address the problem.

But the office of France's equality ministry said it has put aside 361.5 million euros ($398 million) a year.

The killings in France are part of a global scourge that shows no signs of abating, with 87,000 women and girls killed in 2017 according to the UN -- over half of them killed either by their spouse, partner or own family.

The marches in France and Italy come ahead of the UN's International Day for the Elimination of Violence against Women, which is on Monday.

Meanwhile, police said Saturday they had charged a 59-year-old man with the manslaughter of his wife, a week after her body was found in woodlands in the Loire region.