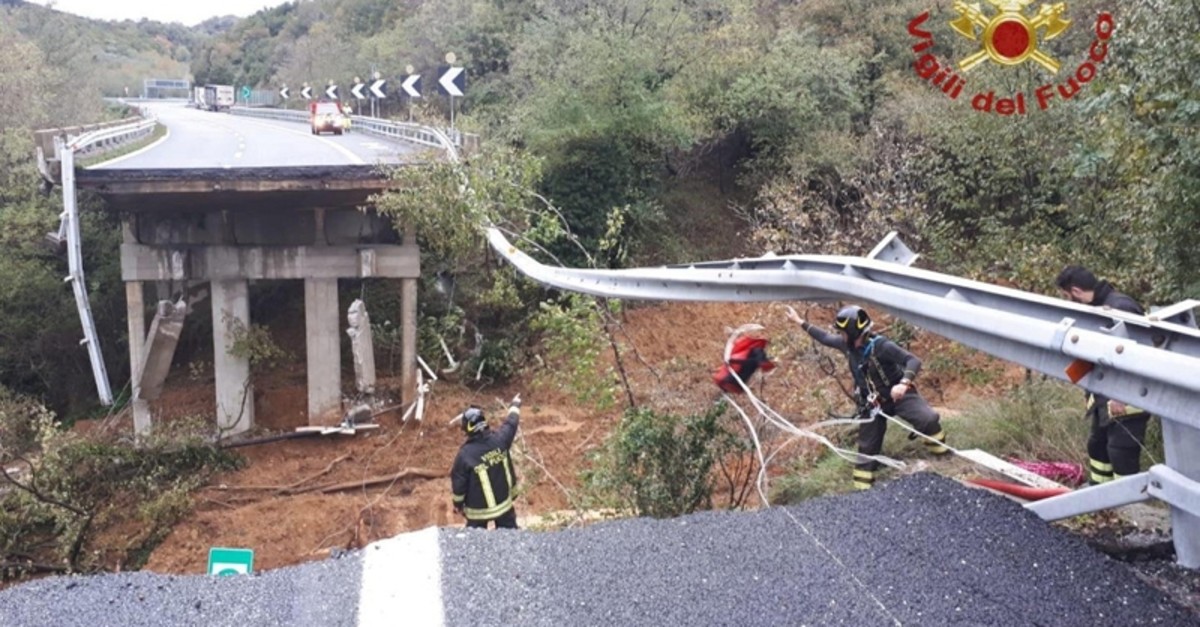 A portion of a motorway bridge linking Savona to Turin is seen after it collapsed due to a landslide near Savona, Italy, November 24, 2019. (Vigili del Fuoco/Handout via Reuters)
by Associated Press Nov 24, 2019 11:05 pm

Flooding pounded France and Italy amid heavy rains over the weekend, leaving at least three dead and a stretch of elevated highway collapsed by a landslide, officials said Sunday. The weather has trapped travelers, downed trees and unleashing mudslides in parts of both countries.

A 30-meter (100-foot) section of highway along a viaduct near the flooded Italian coastal city of Savona collapsed, leaving cars perched perilously on a precipice.

In an aerial video taken by firefighters, cars and one truck could be seen stopped perilously close to the point where the raised part of the A6 highway plunged onto a wooded area of the Liguria region.

A man from one of the cars closest to the precipice stood outside his vehicle, holding up his arms toward other traffic to make sure drivers stopped.

Liguria Gov. Giovanni Toti said a landslide caused the collapse in a muddy, hilly area. Firefighters were using dogs to sniff out any possible victims in two-meter (6.5 feet) high debris of mud, Toti said. It wasn’t known if any vehicles might have plunged off the highway which is supported by pillars at that point.

The roadway gave way about 1.5 kilometers (a mile) outside of Savona on the highway that links that Riviera city to Turin.

The collapse was eerily reminiscent of the 2018 bridge tragedy in Genoa during a rainstorm that killed 43 people, when trucks and cars plunged into a dry riverbed below.

Elsewhere in northern Italy, a woman was found dead after the surging Bomida river swept away her car.

Flooding in Turin, a city in northwest Italy, prompted cancellation of a marathon. In France, the Nice airport was briefly closed Saturday. Rivers leading from the Alps to the French Riviera broke their banks, and sirens rang out in resort towns. Images on French media showed cars peeking above inundated streets and waves slamming onto roadsides.

A rescue boat sank while bringing three people to shore near the French town of Muy, and one of them died, the Var regional administration said. Another person was found dead in a car in the town of Cabasse.

Rain-swollen rivers and flooded streets plagued Italy, where it has been raining, sometimes heavily, in much of the country nearly every day for about two weeks.

In Turin, the Po River overran its banks and flooded the medieval quarter and a popular riverside strolling area known as the Murazzi.

Some 150 people were evacuated from homes in Liguria, Italy’s hilly northwest coastal region. The region struggled with mudslides that blocked several roads, isolating hamlets. In Genoa, the region’s principal city, the charming neighborhood of Boccadasse, a former fishing village with pastel-painted houses, was flooded after the sea rushed over retaining walls and onto the seaside road.

Venice was partially flooded, but the high tide’s level of nearly 1.3 meters (4.3 feet) in late morning was not unusual for the lagoon city accustomed to the phenomenon of “acqua alta,’’ (high water). That level was nearly 60 centimeters (two feet) lower than the exceptionally high wind-driven tide that devastated the art-rich tourist destination earlier this month. Venetians and visitors walked on strategically placed raised walkways or sloshed in boots through water that quickly receded to mid-calf level, then ankle-level.

In parts of the south, cars churned through water higher than their tires, and several motorists had to be rescued from their vehicles in flooded streets in Reggio Calabria, a city in the southern ‘’toe’’ of the Italian boot-shaped peninsula, RAI state TV said.

In Puglia, the ‘’heel’’ of the peninsula, authorities in the Baroque city of Lecce ordered as a precaution on Sunday the closing of parks and cemeteries for fear that storm-battered trees might crash onto visitors, the Italian news agency ANSA said.

In addition to the two dead in France, rescuers are searching for at least four others, French Interior Minister Christophe Castaner said after visiting the area Sunday. He said more than 1,600 people have been evacuated.