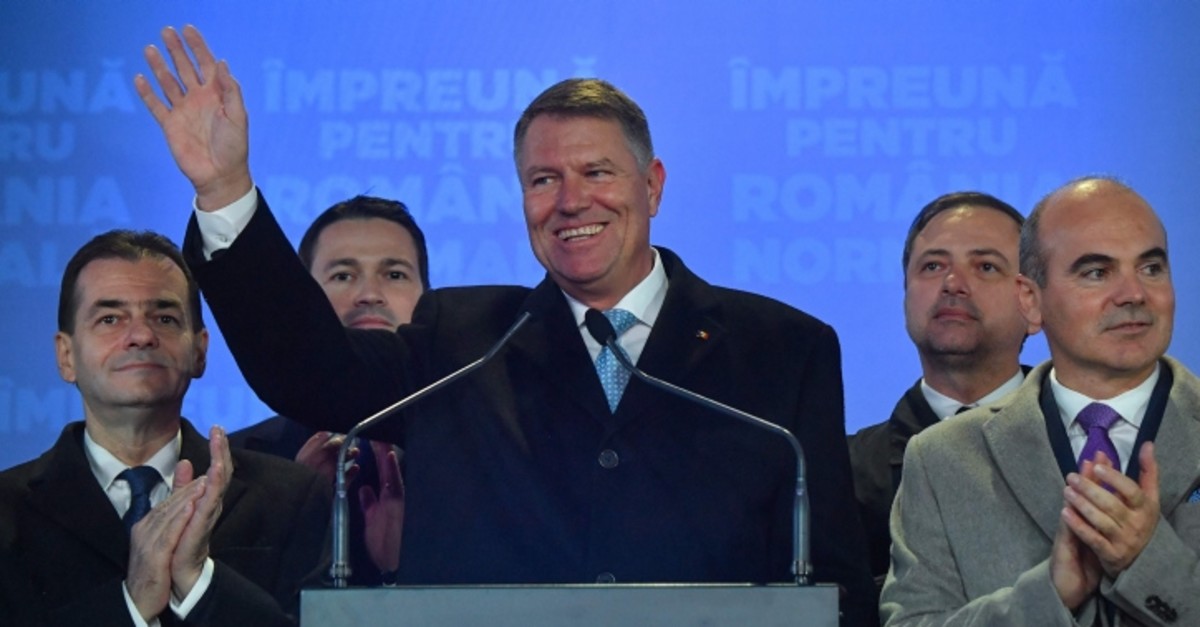 Romania's President Klaus Iohannis waves as he addresses the media at the ruling National Liberal Party (PNL) headquarters, in Bucharest on November 24, 2019 after exit poll results of the presidential elections were announced. (AFP Photo)
by Compiled from Wire Services Nov 24, 2019 10:45 pm

Romania's centrist President Klaus Iohannis easily won a presidential runoff vote on Sunday as expected, crushing his socialist challenger on a pledge to restart a judicial reform slowed down by successive Social Democrat (PSD) governments.
An exit poll conducted by IRES pollster showed Iohannis garnered 66.5% of votes followed by Social Democrats (PSD) leader and former Prime Minister Viorica Dancila with 33.5%. Another pollster, CURS-Avangarde showed Iohannis winning with 64%.
In the first round of voting on November 10, Iohannis won 38 percent of the vote, ahead of 13 other candidates. Dancila came second with 22 percent.
Analysts say voters who backed lower-placed candidates can be expected to largely swing behind Iohannis, amid deep resentment toward the PSD over controversial judicial reforms.
'Normal Romania'
"I voted for a Romania that is modern, European and normal," Iohannis told reporters after casting his ballot on Sunday. A total of 18.2 million Romanians are eligible to vote with turnout at close to 50 percent two hours before polls closed.
A record 650,000 voters are abroad – part of a four-million strong diaspora who have emigrated in search for better paying jobs – and tending to favour liberal candidates.
The PSD government had engaged in a long battle with the European Union, and Iohannis who backed Brussels, over allegations it was trying to push through measures to neuter the judiciary and benefit PSD politicians.
The left-wing party, which is seen as the successor of the ruling elite before the overthrow of communism in 1989 and has dominated politics since, has been accused of widespread corruption.
And while nationalism has been less present in Romanian politics than elsewhere in the region – such as in Hungary or Poland – the PSD tried to frame its clashes with EU institutions as evidence that it was standing up for Romania.
"I voted for a presidential mandate where we see more involvement and respect for the Romanian people and for our national interests," Dancila told reporters after voting.
Judicial controversy
After the PSD-led administration's fall, Iohannis tasked ally Ludovic Orban with forming a new government to be in place until legislative elections due late next year.
Iohannis made the rule of law a central plank of his campaign for a second five-year term, promising to help build functioning institutions without corruption.
Former Foreign Minister Cristian Diaconescu said Iohannis – who hails from the German minority and whose 2014 victory over a PSD candidate was a surprise – represents the "only European and Euro-Atlantic option".
Under the constitution, Romania's president is responsible for foreign affairs as well as approving the appointment of judges and top prosecutors.
Hundreds of thousands of Romanians have protested against the judicial reforms proposed by the PSD, seen as giving politicians a way to avoid corruption sentences.
"I'm very upset. They made rules just to help themselves," said Marin Cumatrenco, a 20-year-old film student who voted early Sunday in Bucharest, adding the most important for him was to "continue the European course".
Sociologist Alin Teodorescu has estimated that introducing the reforms has cost the PSD more than a million votes.
'Dictator' vs. 'toxic'
The PSD, which has become increasingly reliant on an ageing, rural electorate, has accused Iohannis of being a "dictator".
Criticized for refusing any face-to-face debate during the campaign, Iohannis, in turn, called his rival the "incarnation of a toxic regime".
Dancila, 55, an engineer by training, has highlighted the strong economic growth recorded during the PSD's time in office, including increases in pensions and salaries in the public sector.
But this largesse has sparked concerns by the European Union and the International Monetary Fund (IMF), which has warned about the country's rising fiscal deficit.
In May, the PSD's former chief and strongman, Liviu Dragnea was jailed on corruption charges, and the party also saw its support plunge during European elections.