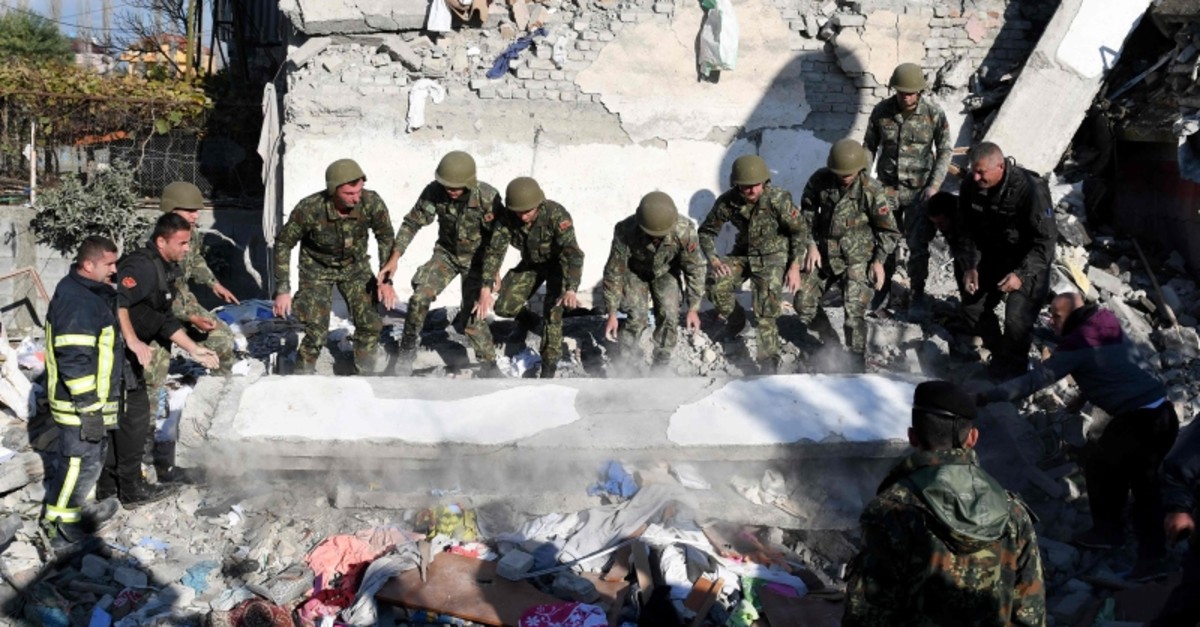 Emergency workers clear debris at a damaged building in Thumane, 34 kilometers (about 20 miles) northwest of capital Tirana, after an earthquake hit Albania, on November 26, 2019. (AFP Photo)
by Daily Sabah with Agencies Nov 26, 2019 8:41 am

At least 14 people have died and 600 people have been injured after a major earthquake caused severe damage in Albania's capital, Tirana, and nearby areas with emergency teams arriving from Turkey and other countries to help out

At least 14 people died and 600 were injured after a powerful magnitude 6.4 earthquake jolted Albania’s capital, Tirana and its heavily-populated surrounding region on Tuesday.
It was one of the strongest since the country was hit by a devastating earthquake in 1979. The earthquake leveled buildings and trapped victims under the debris.

The epicenter of the earthquake was located 15 kilometers off Durres city, at a depth of 38 kilometers. The quake was felt across the southern Balkans yesterday morning and was followed by multiple aftershocks.
Seismologist Branko Dragicevic in Serbia told local media that the quake was felt by some 10 million people in Montenegro, Italy, North Macedonia, Greece and Bulgaria.
In Croatia, seismologists said the quake was mostly felt along the country’s Adriatic Sea coast, waking up people, as reported by Associated Press (AP). In nearby Bosnia, another temblor with a preliminary magnitude of 5.4 struck southeast of the capital and rattled Sarajevo. There were no immediate reports of casualties or damage in that earthquake.

In a statement, the Foreign Ministry said that Turkey expresses condolences to “the relatives of those who lost their lives as well as to the people of Albania and wished a speedy recovery to the injured.” It added that the country will send a search and rescue (SAR) team and an emergency medical team (EMT) to assist post-quake efforts.
“Turkey, as always, is by Albania's side in the face of this catastrophe. SAR and EMT units have been dispatched by our country and will fly to Tirana today on a military plane. Turkey is in full solidarity with the government and the brotherly people of Albania and ready to provide any assistance that may be needed,” the statement added.

Meanwhile, the coastal city of Durres suffered the worst from the earthquake. Four bodies, including that of a young girl, were pulled from rubbles in the port city. A hotel where 20 Turks were staying also collapsed in the earthquake but they all were rescued from under the rubble.

Turkey's Ambassador to Tirana Murat Ahmet Yörük said all Turkish citizens were rescued with only minor injuries. "According to preliminary information, between 300 and 500 buildings collapsed. Some Turkish citizens were staying in a hotel in the port city of Durres. The hotel collapsed, but they have survived the disaster with minor injuries. One of them had a problem with the waist. So we sent an ambulance from Tirana," he said.

Yörük said Turkey was preparing to send disaster response teams to the country to help out. "We have got in touch with Turkey's Disaster and Emergency Management Presidency (AFAD) after meeting with the authorities of Tirana. They are preparing to send a search and rescue team as well as a medical team during the day," Yörük told Anadolu Agency (AA).

A SAR team from AFAD, along with three vehicles and a National Medical Rescue Team (UMKE) from the Ministry of Health are traveling to Albania to support search and rescue operations after the 6.2 magnitude earthquake," AFAD said on its social media account.

The Balkans is an area prone to seismic activity and earthquakes are frequent. On Sept. 21, a 5.8 magnitude earthquake in the country left over 130 people injured and more than 600 buildings damaged. According to U.S. Geological Survey data, over the past 20 years, the country has been hit by just one quake with a magnitude higher than six in 2003 when a magnitude 6.3 tremor hit its southern border with Greece.