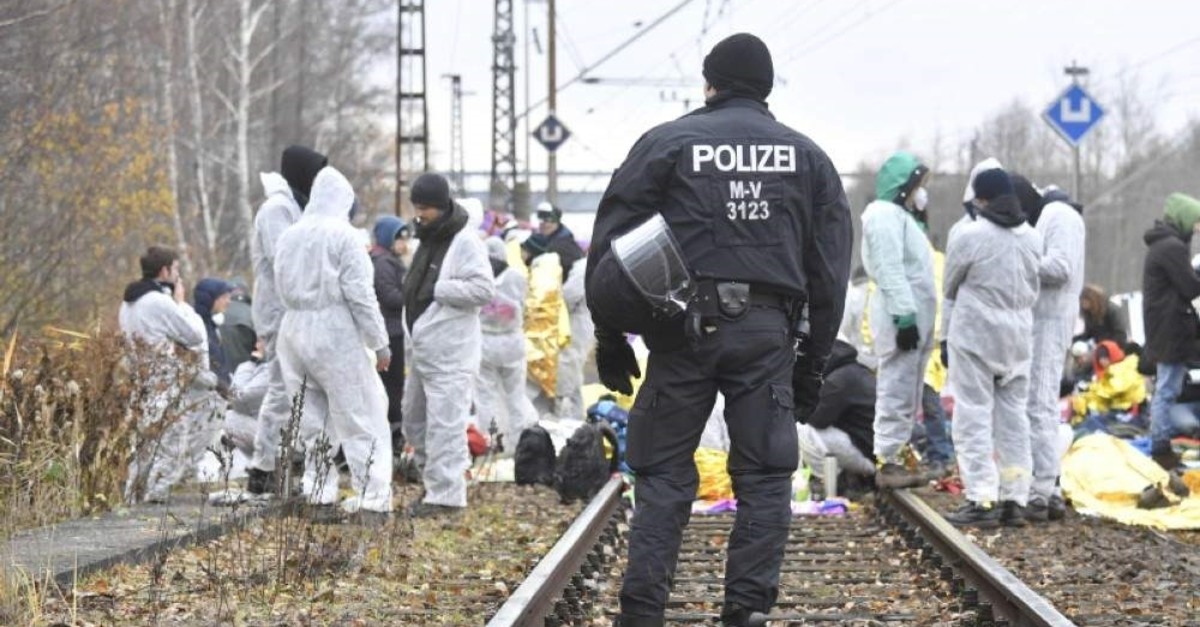 A police officer watches over climate activists from Ende Gelaende as they block train tracks next to the Jaenschwalde power plant in eastern Germany on November 30, 2019. (AFP Photo)
by Compiled from Wire Services Nov 30, 2019 7:38 pm

Hundreds of climate activists protested at open-pit coal mines in eastern Germany, pouring onto the premises to urge the government to immediately halt the use of coal to produce electricity.

Protesters ran into the Jaenschwalde and Welzow-Sued open-cast mining sites in the eastern state of Brandenburg, as well as the United Schleenhain lignite mining area in neighboring Saxony. The Ende Gelaende group organized the action to protest the government's climate policies.

The German News Agency (DPA) reported that police estimated more than 2,000 people took part in the protests Saturday at sites near Cottbus and Leipzig and that some of the demonstrators scuffled with police. Three officers were reported slightly injured at the Janschwaelde mine near Cottbus. Coal supporters had also held a morning vigil at the mining site to call for the preservation of the mines.

The mine operators, Leag und Mibrag, filed police reports asking for an investigation and possible charges against the climate activists.

At the mine in Saxony, police were recording the identities of about 1,200 activists, who were taken off the site in stages. In a process that would take hours, the identities of the protesters had to first be established before they could leave the site, said police. No one had been held in custody at the United Schleenhain mine. Protesters there had violently broken through a police barricade with punches and kicks, despite statements by Ende Gelaende that there would be no violence against people. Ende Gelaende's spokeswoman Sina Reisch, on the other hand, accused the police of being rough with activists.

Burning coal releases carbon dioxide, the main greenhouse gas blamed by scientists for global warming. The German government plans to end the use of coal by 2038 and spend 40 billion euros ($44 billion) on assistance for the affected mining regions, which activists consider too long of a time span.