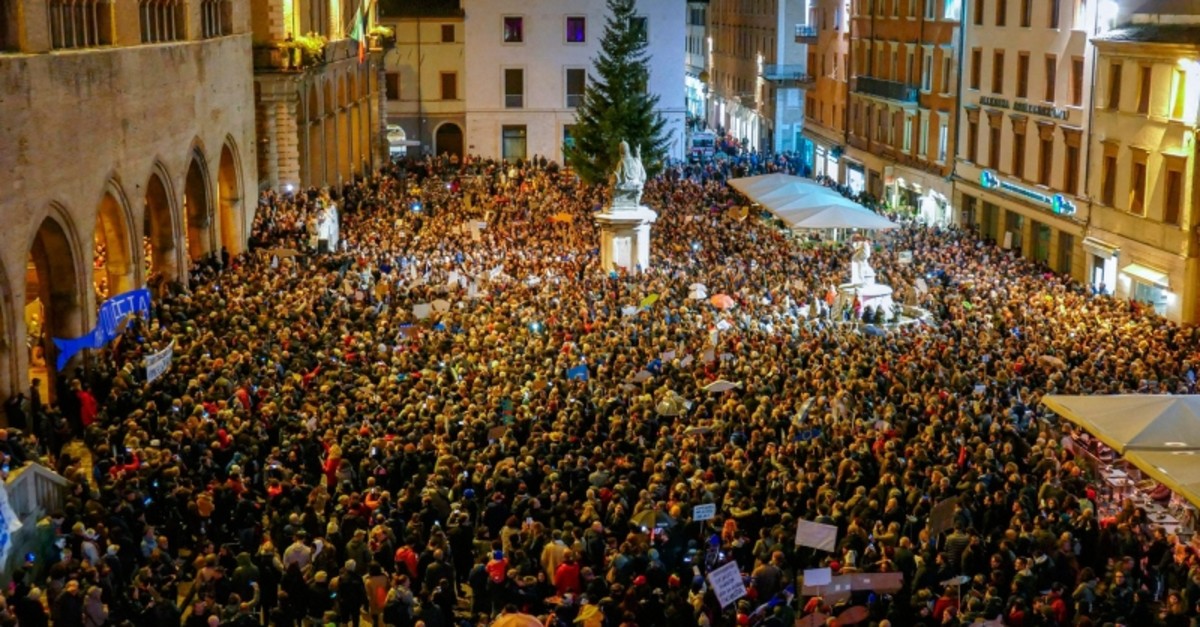 Tens of thousands rallied in Florence in Italy on Saturday against the far-right League party, the latest in a series of demonstrations called by the new, youth-driven "Sardine Movement."

The sardine has become a symbol of protest against the far-right firebrand leader Matteo Salvini, who served as interior minister and deputy prime minister in the previous coalition government with the Five Star Movement.

Students, young professionals and families with children joined the march, where the carrying of political banners was discouraged.

Demonstrators gathered in the city's Piazza della Repubblica sang the anti-fascist song "Bella Ciao" and shouted, "Every sardine has the right to exist!"

Organizers claimed that 40,000 people had turned out to the Florence protest, which they said was substantially more than the 15,000 they claim attended their first rally, just two weeks earlier.

The new movement has staged around 10 demonstrations over the past 15 days in the north of the country.

Instead of the usual banners from political groups, protesters brandished placards in the shape of a sardine.

"No banners, we don't want symbols at such a beautiful gathering, we are tired of the hate, we are not fighting amongst ourselves," one of the organizers, Danilo Magli, told the crowd.

The Sardine Movement was founded on Nov. 14 by four hitherto unknown young activists from the northern city of Bologna in protest against Salvini's politics.

It was a response to the growing strength in the north of the right-wing coalition led by the League.

In late October, the League won a historic victory in regional polls in central Umbria, which had been led by the left for half a century.

"We think the ideas propagated by the League are unacceptable," Paolo Ranzani, a photographer with the Sardine Movement, said on Facebook.

"But sardines are strong and can become a huge wave, a tsunami," another supporter said on Facebook, where the group's page is titled "The Sardines' Archipelago."

But with each election, the League has made increasingly strong showings.

Salvini is now campaigning hard to try to capture another leftwing stronghold, the wealthy region of Emilio Romagna, in the northeast.

Regional elections there are set for Jan. 26 and the polls suggest the League's candidates are running neck and neck with the current center-left governor there.

Salvini has said he wants to conquer the regions one by one to bring down the current coalition between the Five Star Movement and the center-left Democratic Party and force early elections.