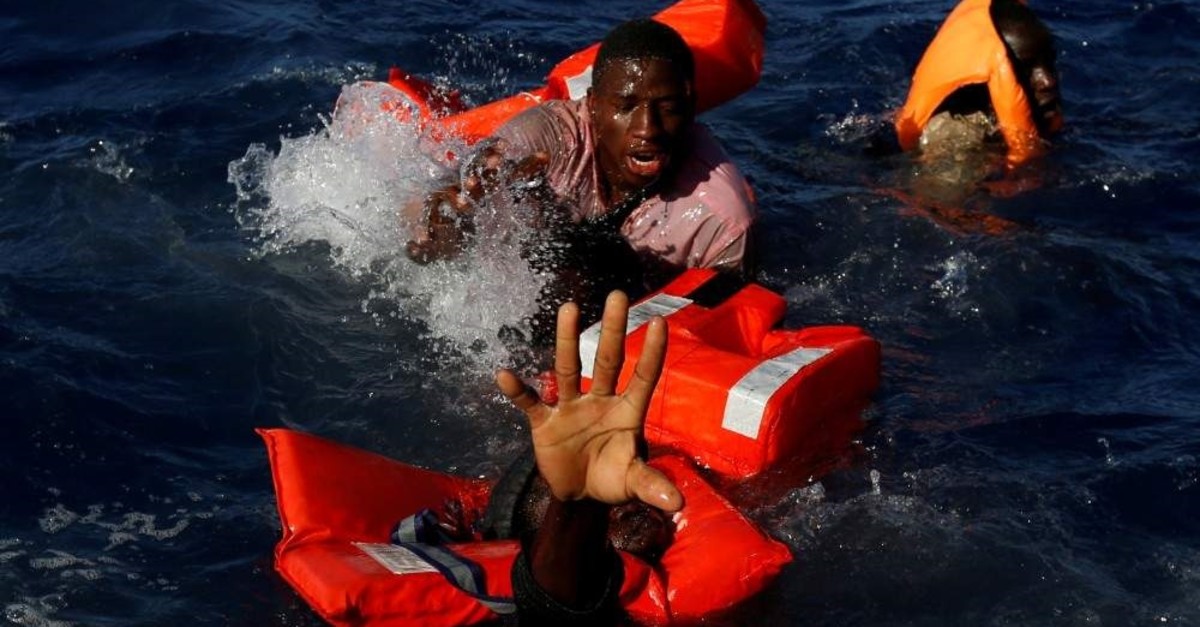 Migrants try to stay afloat after falling off their rubber dinghy in international waters some 15 nautical miles off the coast of Zawiya in Libya, April 14, 2017. (REUTERS Photo)
by Daily Sabah with Agencies Dec 05, 2019 5:27 pm

At least 58 people drowned after a boat from The Gambia carrying around 150 migrants sank off the coast of Mauritania, in one of the deadliest disasters this year among people making the perilous journey to Europe.

The vessel, which set out a week ago bound for Spain's Canary Islands, began running out of fuel and sank off the coast near the Mauritanian city of Nouadhibou, the International Organization for Migration (IOM) quoted survivors as saying. The perilous sea passage from West Africa to the Canary Islands was once a major route for migrants seeking jobs and a better life in Europe. The latest incident was one of the deadliest since attempts became scarcer when Spain stepped up patrols in the mid-2000s. "At least 58 people are confirmed dead after a vessel carrying migrants sank as it approached the coast of Mauritania today. 83 others swam to shore and are receiving assistance," an IOM statement said.

Until this incident, 97 people were estimated to have died this year attempting the Atlantic migration route, according to the IOM. But many deaths are not recorded, as it is difficult to track the number of vessels that do not reach their destination or the number of passengers on board. At the peak of the route's popularity in the mid-2000s, tens of thousands of migrants reached the Canary Islands or died trying. Last year, the Guinea-Bissau coast guard reported that 60 migrants had probably drowned when their ship sank off the coast, but their bodies were never recovered. Although West Africa has some of the continent's fastest-growing economies, the region is struggling to generate enough jobs for its mushrooming young population. As a result, migrants continue to tackle treacherous routes to get to Europe.

Due to the lack of a common response to migration inflows from Africa via the Mediterranean, migrants have been facing the same unwelcoming approach from EU countries. So far, every standoff about migrants rescued from the Mediterranean takes weeks to resolve, revealing the limits of EU tolerance and its inherent deficiencies in promptly resolving dire situations. Instead, they get caught up in intra-EU struggles on what to do with migrants saved at sea, while effectively dashing their European dreams.

Amid a divided response to the Mediterranean migrant rescue crisis, EU countries have long failed to create a more permanent EU redistribution arrangement to prevent migrant tragedies at sea. The Mediterranean Sea continues to be a deadly route, as six people died every day while attempting to reach European shores in 2018. In its report “Desperate Journeys,” the U.N. refugee agency said, “An estimated 2,275 people died or went missing crossing the Mediterranean in 2018, despite a major drop in the number of arrivals reaching European shores.” The death rate among migrants crossing the sea from Libya to Italy or Malta more than doubled last year as naval search and rescue missions were reduced.