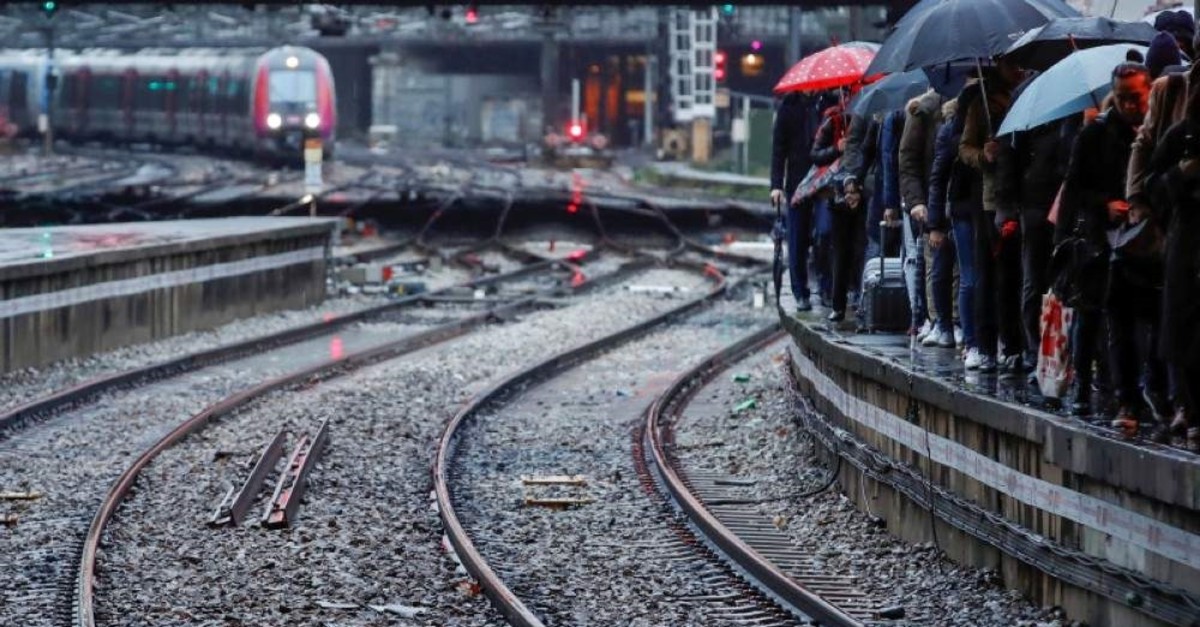 Commuters walk on a platform at Gare Saint-Lazare train station as a strike continues against French government's pensions reform plans, in Paris, France, December 9, 2019. (Reuters Photo)
by Daily Sabah with AA Dec 10, 2019 8:51 am

French unions voted Monday to extend a walkout amid the absence of an agreement between the government and labor union leaders over President Emmanuel Macron’s controversial pension plans, according to local media.

Unions called on teachers, doctors and other public employees to strike Tuesday as Jean-Paul Delevoye, the minister and high commissioner in charge of pension reform, and labor union leaders have not come to a conclusion.

The "unlimited" strike impacted all public transport systems, according to local media reports.

The Parisian public transport operator RATP announced plans to continue striking through Monday, which will lead to major problems in the capital.

Airlines were told again Friday to reduce flights above France by 20%, meaning further cancellations affecting all flights in, out of or above the country.

After the chaos of Thursday and Friday, the flights had returned to normal but on Monday afternoon DGAC announced that they were asked to change their schedules due to the general strike. As one of the French air traffic controllers unions joined the strike as well potentially all flights coming to France could be impacted.
Rail unions will also continue striking and service on national rail operator SNCF’s trains was reduced 90% beginning Thursday.

Thursday saw one of the biggest strikes in recent French history and strikers continued to protest against Macron’s pension plans Friday.

More than 90 people have been arrested, police said.

France currently has 42 different pension programs for different sectors but the government proposed to unify those systems into one pension scheme.

France’s current program is based on the principle of solidarity between generations under which working population finance the pensioners of that year.

However, due to the aging population, fewer people are paying into the current system.

To fix this, the government introduced a point-based system that would compensate the workers with pension points for every day they work or every euro they contribute.

The reform would lift the privileges granted to civil servants and gradually increase the retirement age from 62 to 64, a move expected to adversely affect many sectors.

The workers will get a full pension if they retire at the age of 64. If they retired before, they would lose 5% of their pensions for every year they retire early.

They would also gain 5% increase in their pensions for every year, if they retire after the age of 64.

Demonstrations and strikes have been supported by numerous labor and police unions, as well as the yellow vests movement.