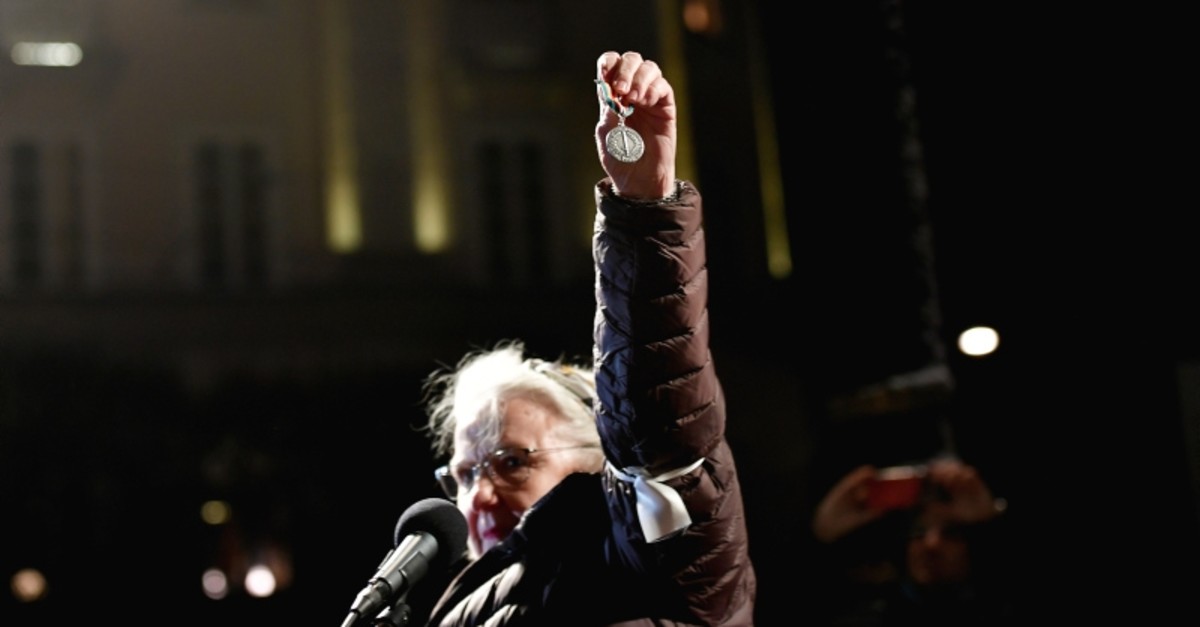 Doctare holds the medal she received while working for U.N. Peacekeeping force in Bosnia in 1980s, wanting to return it, as a protest against the awarding of Handke during a demonstration in Stockholm (TT News Agency/Stina Stjernkvist via REUTERS)
by Daily Sabah Dec 11, 2019 12:56 am

Swedish journalist Christina Doctare announced on Tuesday that she is going to return the Nobel prize she had received over one of this year's laureates, Peter Handke who denies the Bosnian genocide and supports Serbian late dictator Slobodan Milosevic.

"I used to be proud of the Swedish Academy but all I feel now is shame and guilt," she said.

"I witnessed the genocide first-hand 27 years when I was there. I am going to return the Nobel prize over the fact that Peter Handke, who denies the genocide that took place in Bosnia-Herzegovina, received it too," she added.

Ahead of the Nobel Literature Prize ceremony, condemnation grew Monday over the awarding of the 2019 Nobel Prize in Literature to Austrian writer Peter Handke, who is widely known as a denier of the 1992-1995 Bosnian genocide, the worst mass killing in Europe since World War II.

Handke was an opponent of NATO's airstrikes against Serbia in the Kosovo War of the late 1990s and spoke in 2006 at the funeral of autocratic Serbian leader Slobodan Milosevic.

Kosovo and Albania also said they will also boycott the ceremony. Kosovo's outgoing foreign minister, Behgjet Pacolli, has instructed the ambassador in Sweden "to boycott the ceremony," adding that "a writer who supported Milosevic and his genocide in Bosnia-Herzegovina and Kosovo does not deserve the Nobel Prize."

Turkey's Ambassador to Sweden Hakkı Emre Yunt also refused to attend the Nobel ceremony to protest the award being given to Handke.

Handke is known as a great admirer of former Serbian leader Slobodan Milosevic, who died in 2006 at the international tribunal in The Hague on trial for war crimes and genocide. He claimed that the Muslim Bosniaks in Sarajevo killed members of their own community in a false flag attack, which would put the blame on the Serbs, adding that he never believed the Serbs committed genocide in Srebrenica.

Furthermore, Handke visited Milosevic in prison and made attempts to testify in his favor.

More than 10,000 were killed or died in total in the 1998-99 war. A 78-day NATO air campaign ended Serb rule in Kosovo, and the United Nations governed the province until 2008 when Kosovo declared independence from Serbia, which Belgrade hasn't recognized yet.