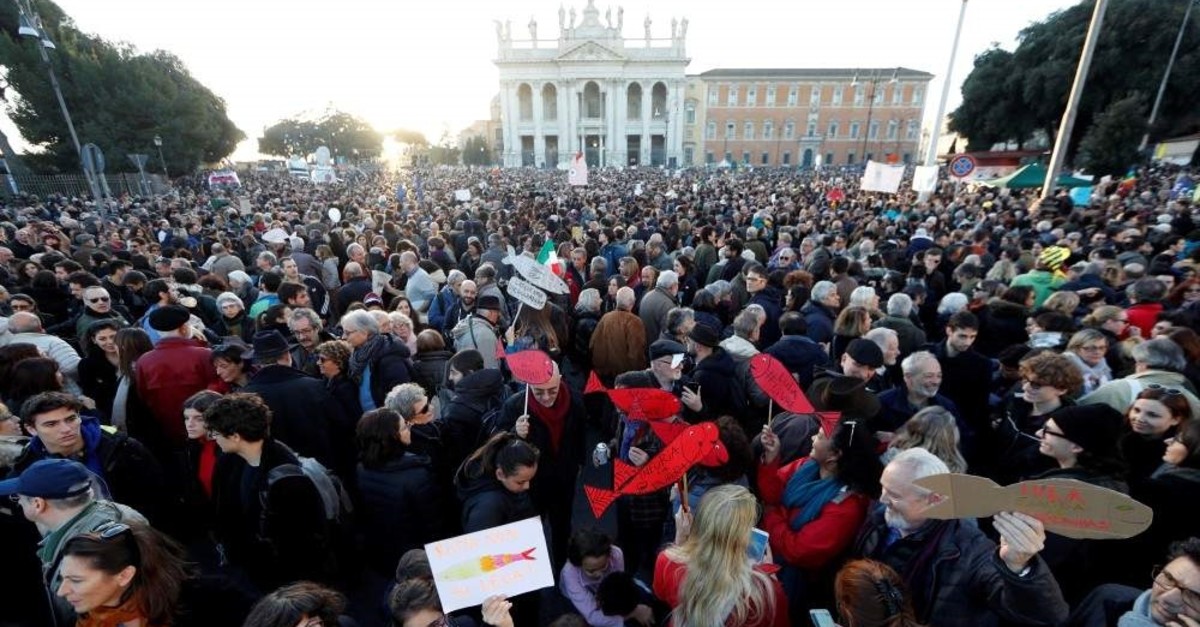 Tens of thousands of members of the Italian anti-populist Sardines movement gathered in Rome on Saturday for their first national rally to show their disillusionment with traditional politics.

The movement is only a month old and started in Bologna when a rally organized by four unknown activists to denounce Matteo Salvini's discourses of "hatred and division" drew a crowd of 15,000, surprising everybody. The movement focuses on "inclusive" social laws and pro-migration and pro-environment measures. Its founders say they have no ambitions to become a political party but the Sardines have become a strong adversary for Salvini, the right-wing leader of the League, Italy's largest political party.

"It's a spontaneous demonstration that aims to change this society, with all the consequences that this brings," said protester Daniela Mazzeo.

"The first (rally) was against Salvini and then it became a reaffirmation of democracy: We are anti-fascist, pro-equality, against intolerance, against homophobia," Santori told AFP before the demonstration on Saturday.

Santori said the march was a "challenge" to Romans to prove their democratic credentials.

Santori, 32, a researcher in economics, and the other co-founders – Andrea Garreffa, a 34-year-old tourist guide and Roberto Morotti, a 31-year-old engineer, want to make politics "cool."

The movement's representative in the Italian capital is Stephen Ogongo, a 45-year-old journalist of Kenyan origin.

He set up the Facebook page of the Roman chapter of the Sardines announcing the rally about 15 days ago.

Ogongo received threats and insults when he made Facebook erase racist messages from an account bearing Salvini's name with the title "Prime Minister."

He said Salvini had successfully "allowed the worst forms of racism" to flourish.

Many Sardines also rally against climate change, the mafia and poverty.

The idea is to have "new energy in a form that is freer and more spontaneous" than a political party, Santori said, adding that there would be no "hierarchy" in its ranks.

The next targets of the Sardines are the small towns that are "fragile territory" and susceptible to "simplistic ideas and populism."

The Sardine movement was a response to the growing strength in the north of the right-wing coalition led by Salvini's League.

In late October, the League won a historic victory in regional polls in central Umbria, which had been led by the left for half a century.

Salvini is now campaigning hard to try to capture another left-wing stronghold, the wealthy northeast region of Emilio Romagna.

Regional elections there are set for Jan. 26 and the polls suggest the League's candidates are running neck and neck with the current center-left governor.

Salvini has said he wants to conquer the regions one by one to bring down the current coalition between the Five Star Movement and the center-left Democratic Party and force early elections.