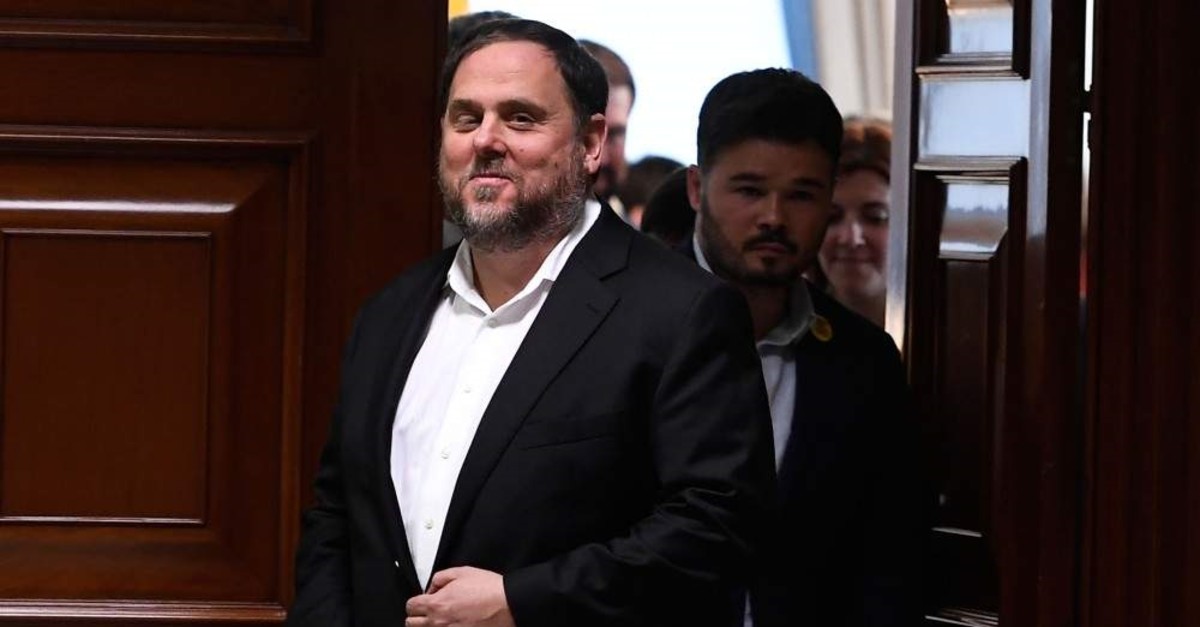 This May 20, 2019 file photo shows Catalonia's former vice-president and elected member of parliament Oriol Junqueras smiling inside the Parliament building in Madrid, after being temporarily released from prison to register as a lawmaker. (AFP Photo)
by Associated Press Dec 19, 2019 12:45 pm

Europe’s top court ruled Thursday that a former vice president of Spain's Catalonia region who is serving a prison sentence for launching a banned independence referendum should have the right to parliamentary immunity.

The European Court of Justice found that Oriol Junqueras, who was part of the Catalan Cabinet that went ahead with a banned secession referendum in October 2017, had a right to immunity because he was elected to the European Parliament in May.

The Luxembourg-based Court of Justice said people like Junqueras who are elected as EU lawmakers “enjoy, from the moment the results are declared, the immunity” to travel to and take part in parliamentary sessions.

Junqueras should be immediately released from prison, his party said after the ruling.

Esquerra Republicana de Catalunya (ERC) said on Twitter the trial in Spain should be declared void after the EU's top court ruling. Junqueras was sentenced in October to 13 years in prison for sedition, along with several other associates.

He was already incarcerated when he was declared to have won the European Parliament seat. Spain’s Supreme Court refused to allow him to leave prison to take an oath to respect the Spanish Constitution, a requirement the country places on politicians before they can take up their seats as EU lawmakers

The Spanish electoral commission later ruled that his seat was vacant and suspended his parliamentary prerogatives.

It's unclear what the EU court's ruling might mean for Junqueras' future.

His case could set a precedent for fugitive former Catalan leader Carles Puigdemont, who was also elected to the European Parliament in May and has been living in exile in Belgium.

Puigdemont is the subject of a Spanish arrest warrant over the independence referendum but he has also launched an appeal at the ECJ. A court in Brussels ruled earlier this week that it would await the outcome of his European case before deciding whether to extradite Puigdemont.