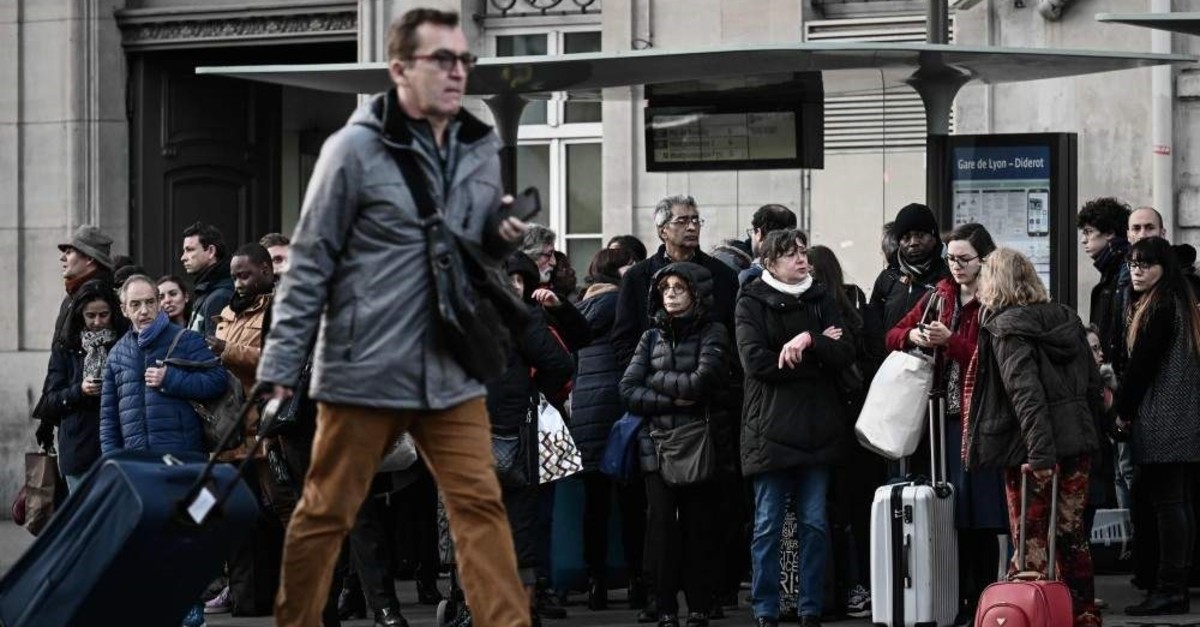 People wait at a bus stop outside the Gare de Lyon railway station in Paris on Dec. 20, 2019, the 16th day of a nationwide multi-sector strike against the government's pensions overhaul. (Photo by Philippe LOPEZ / AFP)
by Daily Sabah with AFP
Dec 22, 2019 6:15 pm

Travelers all over France looking to get home for the holidays encountered canceled train rides and crowded roads as the strike over Emannuel Macron's pension reform showed no sign of slowing down heading to the Christmas season.

The hope that transport strikes would ease were crushed following the failure of the talks between the government and union leaders, with train operator SNCF warning the traffic would be "severely disrupted" over the festive period.

SNCF said its aim to allow 850,000 ticket holders to travel on the weekend was being upheld, but only half of its usual services were running and regional trains were severely disrupted especially in the capital Paris.

Macron called for the strikers to embrace a "spirit of responsibility" and for "collective good sense to triumph" on late Saturday, according to AFP. On Thursday, Prime Minister Edouard Philippe had claimed that talks between the government and the unions showed signs of progress and called on unions to lift the strikes "so that millions of French can join their families for the end of this year."

Although the moderate UNSA union agreed, the hardline CGT and Force Ouvrier unions said they would not let up. The unions seem to disagree with Philippe and the country is facing more difficulties during the Christmas season if neither side decides to compromise.

The unions are hoping for a repeat of 1995 when the government backed down on pension reform after three weeks of metro and rail stoppages just before Christmas. The government and Macron, in particular, is adamant that the reform would be beneficial for his country.