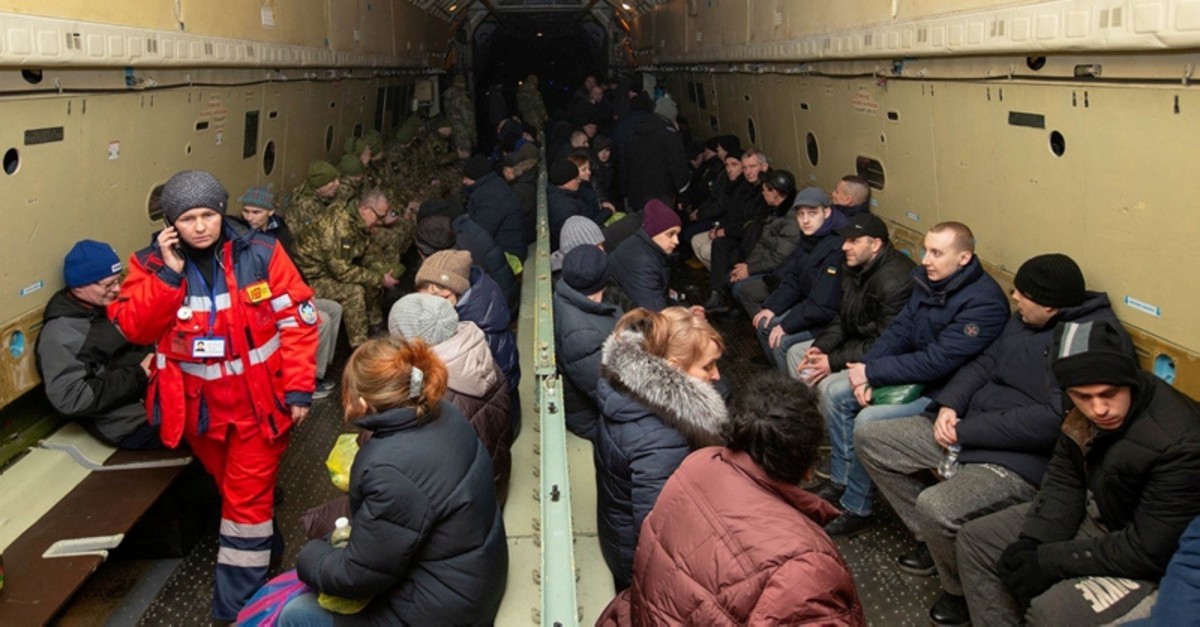 Ukrainian citizens, who were exchanged during a prisoners of war (POWs) swap between Ukraine and the separatists, are seen inside an aircraft at Chuhuiv airport near Kharkiv, Ukraine Dec. 29. (Ukrainian Presidential Press Service/Handout via REUTERS)
by Dec 30, 2019 1:36 am

Ukraine and Russia-backed separatists in the country's war-torn east exchanged 200 prisoners on Sunday, swapping detained fighters for civilians and servicemen held captive in some cases for years in two breakaway regions.

Kiev handed over to separatists five riot policemen suspected of killing protesters during a pro-Western uprising in 2014 as part of the swap, sparking public outrage.

"The mutual release of the detainees has ended," the Ukrainian presidential office said in a statement on Facebook, specifying that Kiev received 76 captives.

Separatist officials said the self-proclaimed Donetsk and Lugansk People's Republics took in a total of 124.

Later the Ukrainian presidency published the list of Ukrainians freed from captivity, which included 12 military personnel and 64 civilians.

Two journalists who contributed to the Ukrainian service of the US-funded Radio Free Europe/Radio Liberty, Stanyslav Aseyev and Oleg Galazyuk, were also freed by rebels.

The exchange came after Putin and his Ukrainian counterpart Volodymyr Zelensky held their first face-to-face talks in Paris on December 9 and agreed measures to de-escalate Europe's only active war.

Prisoners filed off coaches at the Mayorske checkpoint in the eastern Donetsk region, many carrying plastic bags stuffed with their belongings, as gun-toting uniformed soldiers and ambulances were on standby.

Among the group of detainees handed over by the separatists were those who said they had been held for several years after getting caught up in the conflict while visiting relatives.

Volodymyr Danylchenko, who said he had spent three years in captivity, said he was at a loss for words.

"I myself don't understand what's happened," said the 36-year-old, adding that he was leaving his mother behind in the separatist region of Lugansk.

Another detainee released by the separatists, who gave just her first name Victoria, said she had been held for three years.

"I am so happy," the 24-year-old told AFP, adding that she had been convicted of "state treason" and sentenced to 12 years in prison after arriving in the Lugansk region to see her parents.

Another woman being handed to Kiev sported a handwritten sign on her clothing: "My country is Ukraine!"

The swap, which was overseen by monitors from the Organization for Security and Co-operation in Europe, came three months after Ukraine carried out a long-awaited exchange with Russia of 35 prisoners each.

The previous prisoner swap between Kiev and separatists took place in 2017.

Ties between Ukraine and Russia were shredded after the bloody 2014 uprising ousted a Kremlin-backed regime.

Moscow went on to annex Crimea and support insurgents in eastern Ukraine who launched a bid for independence in 2014. Since then more than 13,000 people have been killed in the conflict.

The release of the riot police has raised concerns in Ukraine, with many fearing the country is being pushed to pay too high a price for the swap.

Ahead of the exchange three riot policemen were released from custody while another two were freed from house arrest.

The riot policemen are suspected to have been involved in the bloody crackdown on protesters in 2014. Some 100 demonstrators were shot dead during the uprising.

"What Ukrainians have been fighting for is going down the drain," filmmaker Oleg Sentsov, who was released in the September prisoner exchange, said on Facebook.

Volodymyr Golodnyuk, whose 19-year son was killed in the uprising, accused authorities of "abusing the justice system".

"This country has no future," he said.

In an apparent move to allay concerns, Ukraine's prosecutor-general's office said the trial of the five former policemen would continue.

The US embassy in Ukraine welcomed the exchange in their official Twitter, but said that it recognises that "Russia's ongoing aggression confronts Ukraine's leadership with difficult choices".

Since coming to power in May, comedian-turned-president Zelensky, 41, has sought to kickstart a peace process to end the conflict.

At the Paris summit, the leaders sought to revive accords signed in Minsk in 2015 that call for the withdrawal of heavy weapons, and the restoration of Kiev's control over its borders, among other conditions.

But many doubt whether Putin genuinely wants to settle the conflict.

He has said that if Kiev gets back control of the border in the east, residents of separatist-held territories could be targeted.

Zelensky's peace plan has also been strongly criticised by war veterans and nationalists.

Dmitri Trenin, head of the Carnegie Moscow Centre, praised the prisoner exchange but said it would not bring a settlement any closer.

"The conflict is much more likely to become frozen than resolved," he said on Twitter.